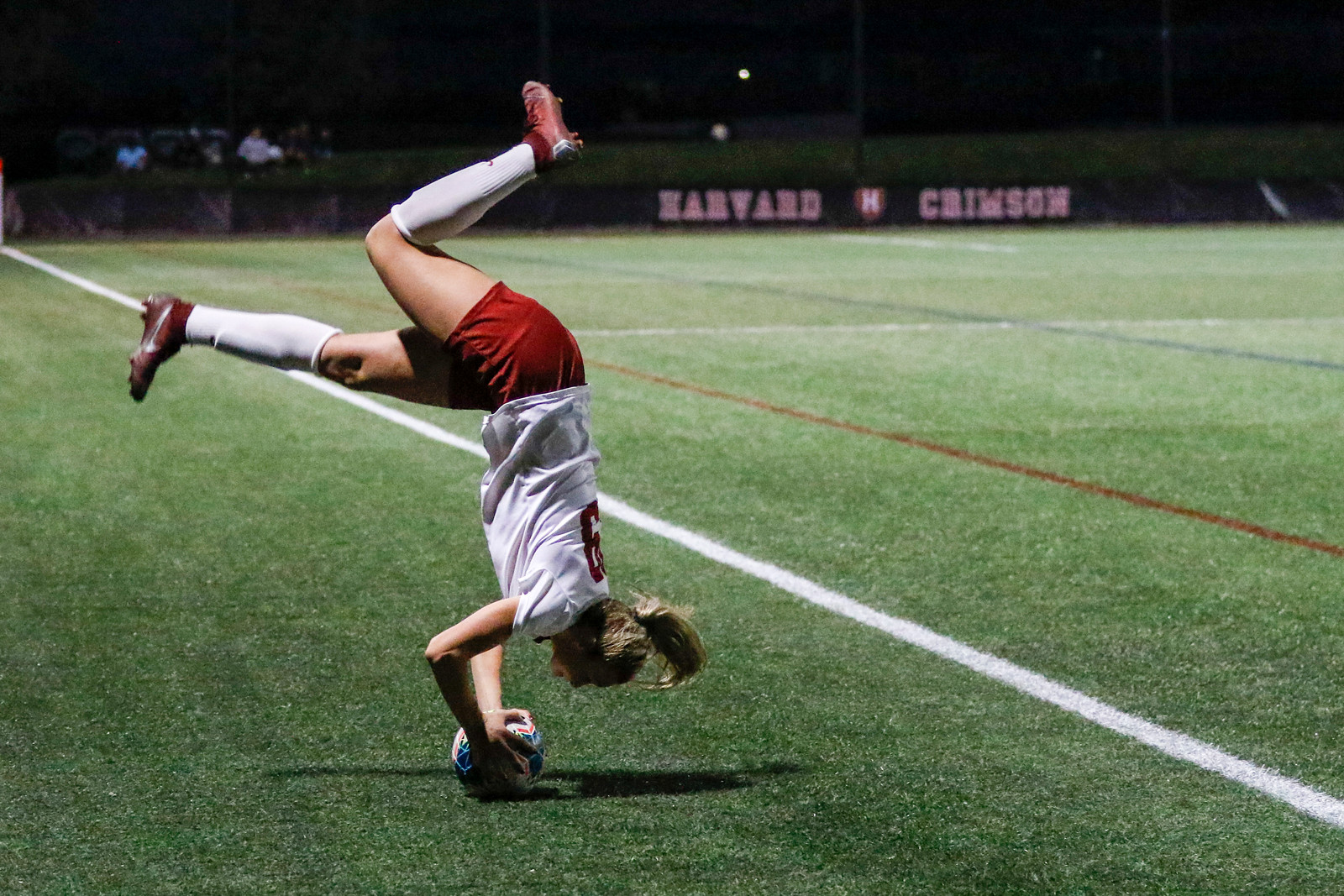 After opening the 2018 campaign with losses in four of its first six contests, the Crimson has begun its 2019 schedule 3-1, including two shutouts. By Timothy R. O'Meara
By Lev Cohen, Crimson Staff Writer

Harvard women’s soccer had to fight off fatigue, a late goal from Massachusetts off a corner kick, and even a fallen drone on a windy night, but the Crimson won its third straight game anyway, capitalizing on two first half goals Tuesday night and remaining undefeated at home.

The first half was a tight affair, with the Minutewomen (3-2-1) consistently attempting to play the ball out from the back by using quick combination passing — their forwards often playing with their backs to goal and laying the ball off for midfielders. But Harvard (3-1) was ready for it, pressing up higher defensively and cutting down passing lanes before trying to counter attack.

“We watch video and we know what they’re trying to do,” head coach Chris Hamblin said. “So we have an approach we want to take, and we wanted to counter attack them, so when we won the ball we wanted to be able to get it back quickly and go at them. So we were able to catch them out on a few occasions, which was great. But it’s one of those situations where you have to kind of take your chances.”

While Massachusetts outshot the Crimson, 7-3, in the first half, most of their shots were from distance and unthreatening. Harvard had the two best chances of the half and made them both count.

Both goals came after passages of play in which Harvard had not seen much of the ball. Seventeen minutes in, junior forward Murphy Agnew, who looked lively throughout the game and provided much of the Crimson’s attacking threat, sent in a dangerous driven cross. First-year midfielder Hollyn Torres collected the ball and slotted it into the bottom right corner for her first Harvard goal in her first start.

She wasn’t the last player to score her first-ever goal. A minute before the end of the first half, after another period in which Massachusetts had enjoyed the majority of the ball, junior forward Lauren Raimondo found a wide open Courtney Rabb, who had time to compose herself, take a few dribbles, and hammer the ball into the back of the net from close range.

“I saw the buildup coming from the transition,” the Tennessee native said. “I saw Lauren was going to get a good cross in, so I just wanted to be there for her, and I’m really glad I could stay composed and convert that goal at such a critical time for our team and help out.”

The sophomore defender had taken just two shots in 11 games last season and was playing in her first game of the year, so she made for an unlikely scorer. The Crimson’s bench erupted when the ball found the back of the net, and Harvard was able to get to halftime with a more comfortable two goal lead.

The Minutewomen came out of the gates strong in the second half, peppering a few early shots on goal and forcing first-year Hannah Gardner, who came on to play goalie in the second half, to make some saves. But the Crimson quickly tightened up defensively and again looked a threat on the counterattack, although many of its counters ended in offsides calls, to the credit of Massachusetts’ high defensive line.

It wasn’t until the 79th minute that the Minutewomen broke through. A corner from first-year Olivia Gouldsbury led to sophomore Lauren Bonavita’s third goal of the season, leading to a nervy final 10 minutes.

“I think it’s disappointing to give up a goal on a set piece,” Hamblin said. “It always is. And I think that with 11 minutes left in the game it left a really frantic ending, which we want to try and avoid. And so I think we’ve got to do a better job of that, making sure that we don’t let other teams back in.”

The late Massachusetts goal was the first Harvard had allowed since a 4-1 loss at Northeastern in its first game. While the Crimson conceded 15 shots, few of them were dangerous and the defense generally looked assured again despite the fact that Harvard is a relatively young team, with just two seniors playing on Tuesday.

“They carry me, honestly,” captain Kimaya Cole, one of the two seniors to play Tuesday, said. “They’re so energetic all the time and they want to win, so that’s what keeps us going all the time. We don’t really have to give them a push, we just all want it together.”

The collapse of the drone was definitely the strangest moment of the night. With a shade under nine minutes to go, as the Minutewomen were pushing for an equalizer, the small white aircraft fell near midfield on the Crimson’s left wing, narrowly missing the heads of two startled players. The referee quickly stopped the game, allowing for the drone to be removed. A few deep breaths and nine minutes later, Harvard could celebrate a tight win.

It was the second game in three days for Harvard, which has another quick turnaround coming. The Crimson will face San Francisco on Friday at Ohiri Field as it tries to build on its mini winning streak and stay unbeaten at home.