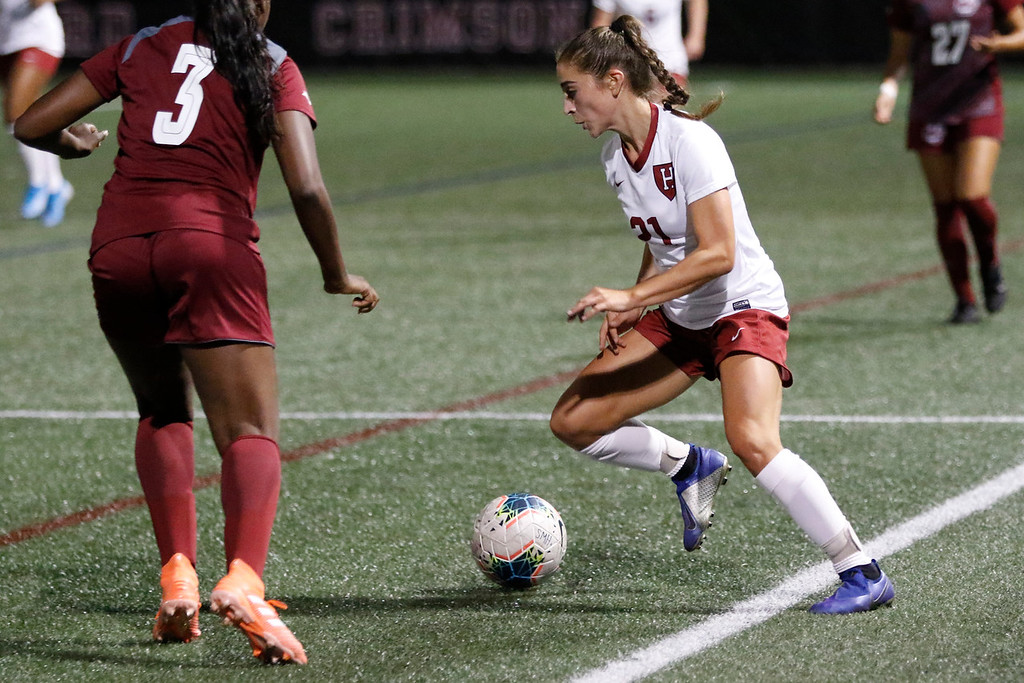 Freshman midfielder/forward Gabby DelPico dribbles across the field during Harvard’s matchup against UMass. The Massachusetts native has two goals and one assist so far in six games that she has played in this season (this includes five starts). By Timothy R. O'Meara
By Lev Cohen

Madison, a dynamic senior forward who had entered Friday’s game with three goals and two assists in the Dons’ first six games, added two more goals and another helper, each in impressive fashion.

In the first half, Harvard (3-2), playing its third game in five days, appeared physically overmatched. The bigger and more experienced San Francisco (5-2) was coming off of a humiliating 9-0 defeat to Stanford on its home turf, and it showed. The Dons came out fired up, winning contested headers, pressing the Crimson into mistakes, and holding Harvard to a single shot — which came just two minutes into the game and was blocked — in the first half.

“I think we knew San Francisco was going to be an athletic team and they were going to put us under a lot of pressure,” head coach Chris Hamblin said. “I think we — as a team overall — hid a little bit more than we should have done. I think we weren’t as comfortable on the ball and we were not showing up and they took advantage of that and they scored some chances.”

The payoff came in the 11th minute, when Madison cut in from the left wing and fired away from 25 yards out. Almost before the Crimson players even knew the shot was coming, the ball had nestled into the top right corner. Harvard’s goalie, senior Kat Hess, had no chance to save it.

Madison was also the catalyst for San Francisco’s second goal, which came a shade under 20 minutes later. After a wayward dribble sent the ball careening toward the goal line, she showcased her speed by running it down and then lofted the ball towards the far post, where 5’9” redshirt senior forward Samantha Jehnings — with whom Madison clearly has terrific chemistry — was waiting. All Jehnings had to do was head the ball into an open net, and the Dons had some breathing room.

The Crimson grew into the game after that second goal, allowing just one total shot in the final hour of the game after conceding six, including three on frame, in the first half hour. But the one shot they did allow in the second half was a damaging one.

Those who had watched the first hour of the game were unsurprised when 63 minutes in Madison, whose driving run had seemingly been stopped by Harvard’s defense and whose back was to goal, somehow managed to buy herself a half-yard of space and quickly fired a shot from the edge of the 18 yard box into the lower left corner.

“[Madison is] just a very dynamic player and one thing I found covering her is just I have to always be within arm’s length to make sure she doesn’t turn,” sophomore defender Jillian Wachira, who was often tasked with following Madison, said. “Just being annoying the whole game and just trying to be in her face a little bit, because once she sees that pocket she goes, and she’s quick, so you give her those five yards and she’s ahead of you just like that.”

The Crimson dominated the rest of the game, starting with a quick response to the third goal by sophomore Sophie Hirst, who directed an excellent cross from first-year midfielder Gabby DelPico into the net for her second goal of the season. But while Harvard continued to pile on the pressure, finishing with eight second half shots (six on goal) to San Francisco’s one (the goal by Madison) and creating multiple scoring chances, the three goal deficit was too much to overcome, and the Dons held on for a 3-1 victory.

“In the second half we showed up, we competed, and we wanted the ball under pressure,” Hamblin said. “I think it’s a really good lesson for our young team to understand that you can’t hide, you can’t be afraid, you have to attack each game and although the game can be a game of two halves, often times if you put yourself in a hole, it can be too difficult to get out.”

In the loss, the Crimson also suffered what might have been a damaging injury. Near the end of the first half, junior forward Murphy Agnew, the catalyst for much of Harvard’s offense so far this season and a key connector between the team’s midfield and first-year striker Angela Caloia, limped off the field and did not return to the game. Agnew’s status for Sunday’s game at Connecticut is uncertain, but any time she misses will be damaging to the Crimson going forward.

Harvard will travel to Storrs to face Connecticut before it returns home for matchups with UMass Lowell and LIU next week, the Crimson’s final two games before Ivy League play starts in two weeks.