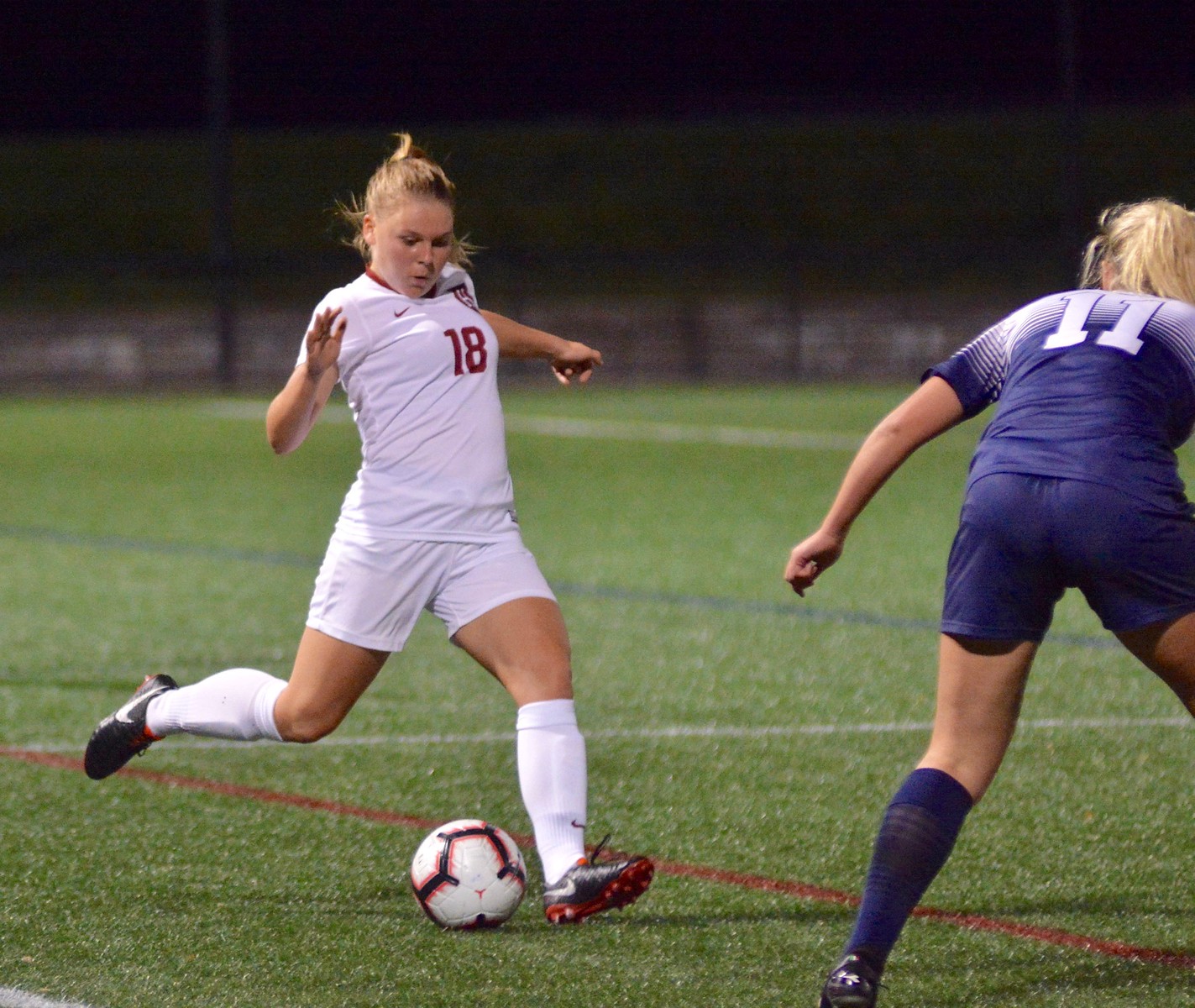 Sophomore defender Lara Schenk looks to find a teammate as she is pursued by an opposing striker. The Seelze, Germany native helped Harvard to its first clean sheet of the season as it cruised past Quinnipiac 3-0 on Wednesday. By Henry Zhu
By Connor J. Wagaman, Crimson Staff Writer

A powerful front moved through the Boston area Wednesday evening, delaying Harvard’s home opener by 90 minutes. The storm cell would not be the last powerful front to light up Johnson field Wednesday night, as for 90 more minutes the Crimson trio of freshman forward Angela Caloia, junior forward Murphy Agnew, and sophomore midfielder Sophie Hirst combined for three goals and five assists to give Harvard the win in its home opener against Quinnipiac.

With the victory, the Crimson (1-1) advanced its all-time record against the Bobcats (3-1) to a perfect six undefeated matches, disrupting Quinnipiac’s effort to extend a win streak of their own. The Bobcats entered the game one win shy of their 4-0 start in 2012, which, with the loss, will be entered into the record books as their second-best start of the decade.

Holding tightly to a 1-0 lead, Harvard broke open the match in the 31st minute of play with a powerful drive up the field orchestrated by the triumvirate of Caloia, Agnew, and Hirst.

Caloia picked up the ball in the Crimson backfield and pushed it to Agnew, who dribbled up the turf. Skirting defenders, Agnew passed to Hirst, who picked up the ball just beyond the fingertips of Quinnipiac freshman goalie Meaghan Phillips. With Phillips out of position, Hirst saw Agnew in front of the goal mouth, open for a tap-in. Playbook-perfect? No. Two goal lead? Yes.

“Angela [Caloia], Murphy [Agnew], and Sophie [Hirst are] very dynamic and dangerous players,” said Harvard coach Chris Hamblin. “We just want to get them in positions to have opportunities to score… I think they’re going to be a force to be reckoned with."

The Crimson’s first-half finish contrasted sharply with the start of the game. Although Harvard was hot at the beginning, putting up a shot five minutes into the match and sweeping the ball across the front of the Quinnipiac goal just minutes later, overall, the initial 20 minutes elapsed in a decidedly undecided manner.

Then, the Crimson committed a foul, and momentum shifted as the Bobcats flexed their as-yet-undefeated muscles. Carefully tapping down the field, Quinnipiac kept the ball largely on Harvard’s side for the next ten minutes, notching two shots before relinquishing control to the Crimson.

The next minutes’ offensive flurry of Harvard breakaways, an offside call, and one diving save from Phillips offered a foretaste of the Crimson goals to come.

23 minutes into the first half, sophomore midfielder Taylor Nielsen chipped the ball toward the net. Hirst swept in, taking the ball to the back right corner of the penalty area. Turning, she saw Caloia on the left edge of the goal, who evaded a defender and fired for the first goal of the game.

“We probably should have scored more than we did in that first half,” Hamblin said. “We said to the group after, this is great, we’ve got to celebrate it, but of course you’ve got to recognize that against great teams you’re not going to get that many chances, you’ve got to be more clinical.”

The Crimson opened the second confidently, keeping any Quinnipiac offensive efforts from getting off the ground. Twelve minutes in, Harvard found another breakaway, again spurred by Hirst. An arching pass from midfield found Caloia, who, pressured by defenders, quickly settled and tapped to Agnew. One-on-one with the Bobcats goalie, Agnew shot around Phillips for her second goal of the night.

“It’s so fun to play with those girls up there,” Agnew said. “I think all the pieces are starting to come together. We still have a lot more work to do, but the potential’s there. We’re scoring goals, which is awesome.”

With a 3-0 lead, the Crimson defense worked for the next half hour to seal the victory. A diving grab in the 11th minute from senior goalie Kat Hess ⁠— who split the game with sophomore goalie Samantha Schmitz ⁠— preserved the shutout.

“I thought we did a really good job of defending,” Hamblin said. “A lot of our possessions started with them playing through the Quinnipiac pressure, and then we were able to get our midfielders on the ball faced up and have a lot of opportunity.”

With a victory in the books, Harvard will look to continue its winning ways against Northwestern, an NCAA tournament regular.

“Big Ten Conference, they play a great schedule,” Hamblin said. “They’re a great team, and I think we’re up for the challenge.”

The game against the Wildcats kicks off at Ohiri Field on Sunday at 1 p.m.