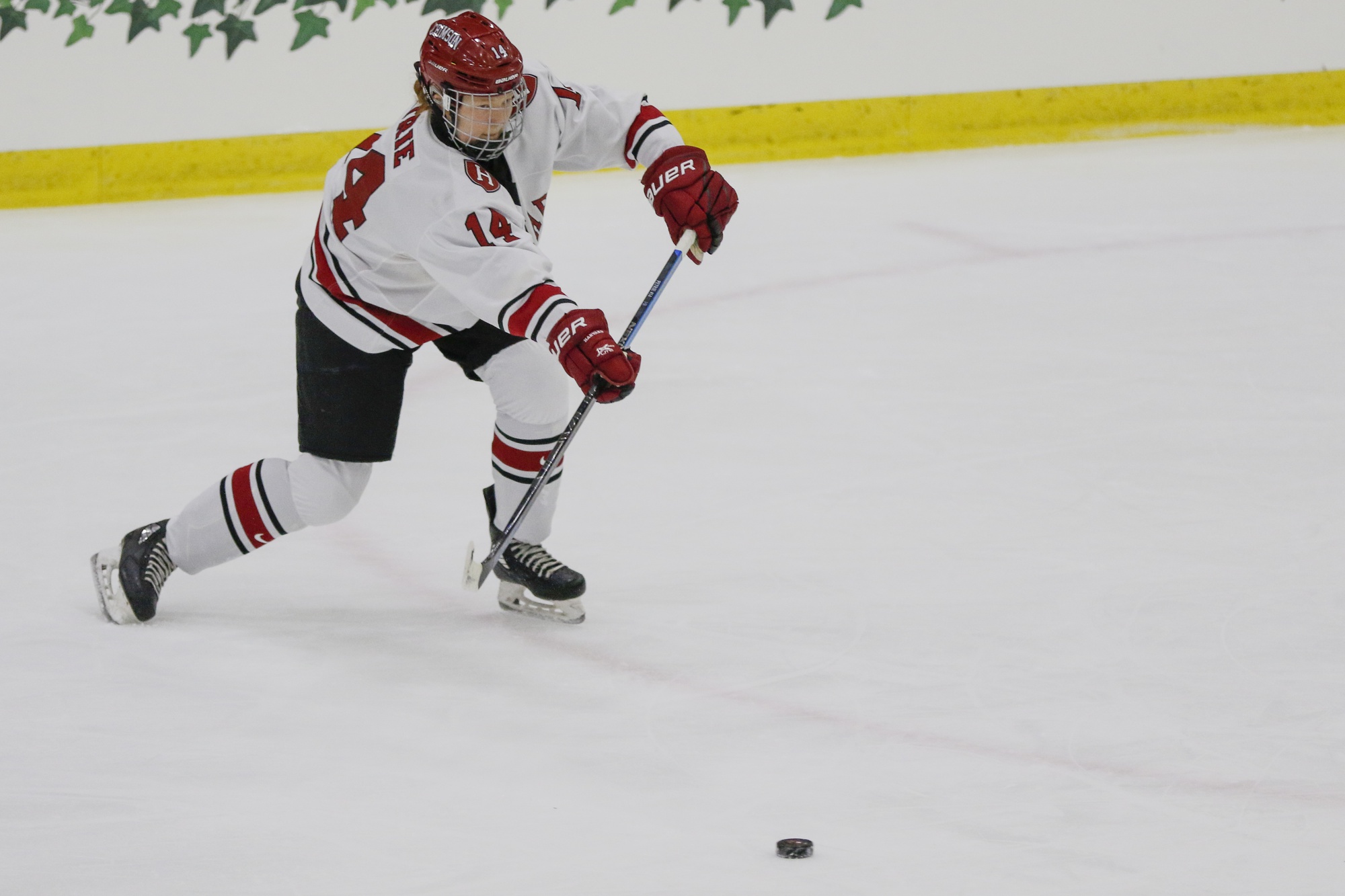 The Union Dutchwomen and Rensselaer (RPI) Engineers have struggled in league play, yet both teams managed to start strong against Harvard in last weekend’s ECAC matchups. Nonetheless, the Crimson eventually cruised to a 7-2 victory over the Dutchwomen, thanks to a five-goal second-period explosion, and outlasted the Engineers 3-0, methodically putting up one goal in each frame. With the performance, the Harvard undefeated season in league play remains intact as the Crimson pushed its record to 9-0-0 in the ECAC and 10-4-0 overall.

The Engineers are still seeking their first win of the season, but for much of the game on Saturday, they did not look like a winless team. While they never led, the game remained within two scores until the third period. In the last stanza, however, with Crimson attackers circulating the goalmouth and hindering the vision of first-year RPI goaltender Ena Nystrøm, sophomore defender Maryna Macdonald blasted a point shot through the maze of players. With the third and crucial tally, Harvard managed to build its lead to a comfortable 3-0 margin—ultimately the final score.

“Goalies these days—everyone is stopping the first shot,” junior goaltender Becky Dutton said. “The most important thing is taking away their eyes. That way we can get tips [and] rebounds...Maryna had a great goal from the point there, [and] I think the goalie was screened. Having that net-front presence is key to the whole team’s success.”

The goal was actually part of a larger theme for the Crimson: generating traffic in front of the net. Because goals did not come easily, battling in front of the net was critical to the offense. In addition to the third goal, which weaved through multiple players before passing Nystrøm, Harvard’s first and second goals depended on getting pressure on the goalie. In fact, both plays came off of rebounds.

“Being able to crash the net hard and get rebounds was a lot of how our goals went in,” sophomore forward Dominique Petrie said. “They [RPI] did a good job defensively—I will give them that—but I think we just persisted through and came out on top.”

On the first strike of the game, junior defender Emma Buckles fired a point shot hard along the ice, which Nystrøm did deflect with her stick, but the Engineer keeper did not manage to angle the puck into the corner or cover the rebound. With the puck in a dangerous position next to the crease, sophomore forward Kristin Della Rovere poked it free until it eventually trickled into the slot, where sophomore forward Anne Bloomer collected the loose change and backhanded it into the net.

Harvard’s second goal came off of a similar play, except this time, Della Rovere ripped the initial shot from the top of the circle. The puck again slid along the ice before caroming into a rebound, which Petrie hammered away at twice. Following her first attempt, she managed to power the puck into the net for another gritty goal. Jockeying for position in front, Petrie was actually knocked to the ice and finished the play on her knees; notwithstanding, she muscled the puck through the netminder anyways.

Initiating the rebounds that led to both goals, Della Rovere ended up with two assists for the game, leading the team in points for the day along with Petrie, who added a goal and an assist for her multi-point effort. Ultimately, although capitalizing on opportunities was a challenge, simplicity, execution, and determination proved to be the offensive keys that opened up the scoring for the Crimson.

“It’s doing the little things that add up over time that ultimately wins you games,” remarked Petrie as she summarized the efforts to fight in front of the net.

On the defensive end, Harvard showcased its depth and proved its strength at the goaltending position. Becky Dutton, in her first appearance of the season, put on a shutout performance, stifling all 21 RPI shots-on-goal. Dutton’s performance—her first shutout in a Crimson uniform—would earn her ECAC Goalie of the Week honors.

But, since the Crimson controlled many offensive stats (i.e. shots-on-goal, 40-21, and faceoffs, 27-14) and the ice tilted towards the Engineer cage, establishing a rhythm in goal was a challenge. Nonetheless, Dutton remained sharp, standing up to both flurries of shots and sporadic opportunities alike, and she credited her success to her mentality of not trying to do too much on any given play.

“The biggest thing for me in net was focusing on one puck at a time,” Dutton said. “You can’t worry about the next play, the next period, or anything like that.”

With the defensive end shored up, three goals would prove to be plenty for Harvard. RPI scrapped until the end, but the Crimson eventually became too much to handle, outlasting the Engineers.

“RPI really battled hard throughout the whole game,” Dutton said. “It definitely wasn’t a given that we were going to win. That’s any league play right now—anyone can win any game. For us, we had to keep the pressure on them.”

Despite coming into the game with six more wins—and ten fewer losses—than the Dutchwomen, and mustering an 11-8 shots-on-goal advantage in the opening stanza, the Crimson entered the first intermission deadlocked at zero. Nonetheless, the team sought to keep to its offensive game plan and tried not to overthink adjustments.

“We were playing really well in the first,” Petrie said. “We had a lot of scoring chances—we just didn’t capitalize. We came out in the second knowing that they [Union] were still going to give us their all, but we needed to step up and give them a little more. I think we did just that, and we got some puck luck and put them in the back of the net.”

Indeed, patience and persistence seemed to pay off in the second. Just 3:34 into the middle period, Harvard eventually broke the tie and gained a 1-0 lead as Petrie sprinted towards the cage before shifting laterally and shelving the finish.

“It was truly all due to my linemates,” Petrie said. “It started with a great breakout in the [defensive] zone, and then [junior forward] Keely [Moy] kicked it up to [junior forward] Brooke [Jovanovich], and I was cutting to the middle with speed calling for the pass. She [Jovanovich] gave me a great pass, and I just made a move, shot, and, luckily, it went in the back of the net.”

“We were just playing off of each other and working with each other,” Jovanovich said. “We have a group of girls on our line who are very powerful forwards. It was just about trying to establish lanes, get shots, and then follow through. It was our second time playing together, so we just wanted to keep things simple.”

With momentum in hand after the first goal, the Crimson would look to extend its lead. That momentum, however, was stifled by a Macdonald interference penalty—but only for 51 seconds. Despite being one-skater down, Harvard continued its scoring rush, on a breakaway, but this time short-handed, with Jovanovich finishing the play. With a Union defender trailing, Jovanovich pulled the puck across the crease and tucked it past the outstretched toe of first-year Dutchwomen goalie Bella McKee.

“They [Union] broke down the ice, and our forwards [came] off with a late change,” Jovanovich said. “As I came on, I saw the puck get broken up in the play down in the far right corner. I thought maybe that they [Union] might try to send it down and that I could potentially try to grab it. That ended up happening—great play by [sophomore defender] Kyra [Willoughby] to get the puck down the ice and [by] Dom [Petrie] to make a tough play. I just tried to get the goalie moving. She was doing a really good job stopping first shots.”

Momentum now decidedly tipped in Harvard’s favor, but the squad took another penalty, this time tripping from first-year forward Courtney Hyland. Nonetheless, the Crimson again played the counter-attack, converting the one-skater disadvantage into yet another rush, with Petrie leading the charge for a second short-handed goal. Two Dutchwomen defenders closed in on Petrie and did dislodge the puck as she crossed the faceoff dot. Petrie, however, tracked the puck as it was knocked off her stick and regained possession before the defense could clear; all of a sudden, Petrie was one-on-one with the goalie McKee. With the goaltender opting not to poke-check, Petrie managed to outlast the butterfly slide and sneak a backhand inside the post to push the lead to 3-0.

For the rest of the period, Harvard stayed out of the penalty box, helping the Crimson to two more strikes in the second, including Petrie’s hat-trick-clinching third goal. That said, Union did have the last laugh of the middle frame, getting on the scoreboard in the final two minutes of the period. First-year forward Leah Herrfort notched the Dutchwomen’s first tally by ripping the puck into the top-right corner of the net off of a lateral drive in a play similar to Petrie’s first goal of the game. Eventually, after the 0-0 first and 5-1 second, Harvard would win the last period 2-1 to cap a 7-2 final.

Including the Petrie-Jovanovich-Moy trio, the Crimson saw 10 different players register a point, picking up from the game against Boston College on Dec. 31 which saw 11 different Harvard skaters earn points.

“No one person can win a game,” Jovanovich said. “If we are going to do it, we’re going to do it together… We talk about each person doing their job, and that’s what’s going to make it work. That’s what worked this weekend and last Tuesday.”

Notably, outside of Dutton’s first career shutout on Saturday, Friday saw several Crimson players achieve career firsts as well. Among them was sophomore goaltender Lindsay Reed, who not only made 21 saves on the day but also recorded her first assist at Harvard. First-year forward Shannon Hollands scored her first career goal in the third period, and first-year defender Nicki Lutschaunig added her first career point with an assist in the same stanza. Even Petrie’s hat trick was her first in a Harvard uniform, helping her get to a team-leading 24 points by the end of the weekend.

Overall, the weekend continues a five-game win streak for the Crimson. After winning its first five games of the season, Harvard hit a four-game skid but now has again rattled off five (and counting) consecutive wins. The last two games of that four-game losing stretch came against the top two teams in the country—Wisconsin and Minnesota—in the Country Classic, a late November showcase event held outside of Nashville, Tenn. Despite the two losses though, Harvard did take lessons away from Tennessee which have helped reignite the winning ways.

“We had a really good experience in Nashville,” Dutton said. “We didn’t get the result that we wanted, but we competed really hard, and we saw that we could keep up with those teams. Seeing that we were able to do that gave our team a little bit of confidence. We’re really sticking together right now, and working together with that confidence has brought really good results so far.”