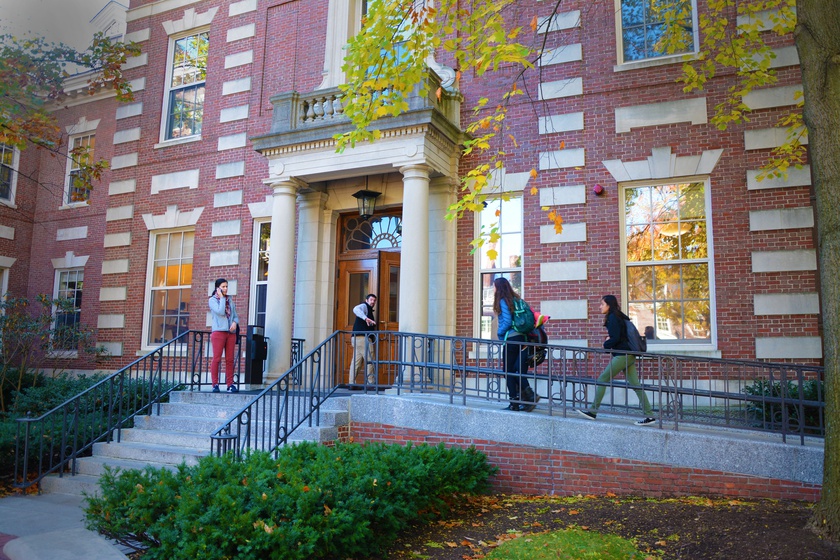 Annie E. Schugart Students and faculty flow in and out of the Barker Center, home to the Humanities Center at Harvard, on a Monday morning.

Chloe Chapin is a former Broadway costume designer now pursuing a Ph.D. in American Studies. If menswear lacks excitement, Chapin does not.

“The thing I find really interesting about menswear is the lack of excitement within it, the plainness of it. It doesn’t vary much from one man to the next.”

Chloe Chapin is a former Broadway costume designer now pursuing a Ph.D. in American Studies. If menswear lacks excitement, Chapin does not.

Sitting in a men’s fitted shirt rolled up to the sleeves and sporting a tomboy haircut, Chapin remembers rebelling against skirts with her sister, insisting that their mother dress them in matching white peter-pan collared blouses and red corduroy pants for their obligatory Christmas photo. When training as a carpenter in college, convenience was key. Chapin wore Carhartts, a black T-shirt and a baseball hat everyday.

But going to design school in New York flipped her style. “I was wearing designer jeans and high heels and long, curly hair and trying to be girly,” Chapin says. “One morning I was shopping at Bergdorf’s, spending $20,000 on a pair of shoes to take to a fitting with a movie star for some big broadway show. I have all these shopping bags in my hand and I’m hailing a yellow taxi on the streets of New York and I caught sight of myself in those big plate glass windows and I was like: Who the fuck is that, who is that glamorous lady, and where did that vegan punkrock Santa Cruz hippie go?”

The shock prompted Chapin to cut her hair short, which caused another wardrobe change: She got back into menswear because “it didn’t make sense” to wear her “decorative” feminine clothes anymore. Besides, she explains, “women will never get ahead in this world if they are constantly being told they need a new handbag.”

Chapin has spent the past eight years studying the male formalwear that emerged in the 1820s: the tuxedo. At first glance, it may seem strange to include the immortal tuxedo in the realm of ‘fashion,’ a term that some define as “the particular rate of change in contemporary dress.” Chapin, however, prefers to think in terms of “fashioning,” meaning the way “we fashion ourselves, and our identities,” including “contemporary clothing that changes on a regular basis,” as well as “vintage fashion, or menswear.”

Tuxedos were not always the go-to getup for men wanting to look smart. From codpieces to hosiery to heels, European men’s fashion used to be more elaborate and exhibited a far steeper rate of change — comparable to women’s fashion now. “The first time anyone starts wearing [a tuxedo] is around 1820, and by 1850, no one is wearing anything else,” Chapin says. “I call this the ‘uniformification’ of formal wear, and it is really a short period for a uniform to coalesce.”

“We usually associate uniforms with the military, or occupations such as a doorman, a monk or a flight attendant,” Chapin explains. “Even military uniforms change all the time, whereas for formal wear, while little things have changed, like the width of the lapel or the shape of the trousers, the elements are all the same.”

The style of the tuxedo became cemented in the United States during the Jacksonian period, a time when “politics are all about expelling Native Americans and the rise of democracy and equality.” White men of all classes were gaining suffrage while women and Bblack people continued to be denied their voting rights. “What’s interesting is who wears this outfit,” Chapin says. “It’s those same people who suddenly have access to this democracy and equality.”

If you imagine a dartboard where power is at the center and radiates outwards through the concentric rings, Chapin suggests that you would find the “rich, white, cis, heterosexual, able-bodied man who has a wife and two kids and is tall with good teeth” at the bullseye. A “poor man can make money and buy a suit to have access to the center of power, a gay man can put himself in a heteronormative box and wear a suit to have access to that same kind of power,” but “as a woman,” Chapin asserts, “you are always borrowing a man’s outfit when wearing a suit.”

Looking back at trends in the fashion industry, Chapin highlights “the boyfriend jean, the boyfriend blazer and even the boyfriend watch” as telling examples of clothing labeled by a masculine association, rather than by the individual who wears them. Whenever you see a woman wearing a tuxedo, “the story is always about her claiming a kind of power, borrowing power from men,” Chapin says. “Even though women have been wearing tuxedo inspired outfits for 100 years, we still don’t get to own that idea of an outfit; it’s always going to be masculine.”

Today, the suit serves to equalize men while still excluding women. Even though suits used to be part of a dress code that was a “policing of class,” a $20 suit now allows almost any man to access the power at that dartboard’s center. “Maybe the pants are too long, the fabric is not very nice, the pockets are baggy and there is a yucky interface in the lapels.” But a cheap suit is still a suit, and no clothing can hide the visual clues that will bar someone from such a ‘men’s club.’ Even as women don suits as symbols of authority, they’re still clothing themselves in masculine-derived power.

The gendered nature of formalwear also presents a problem for nonbinary people. “If you are agender, genderfluid, genderflux, do you have to wear a dress and a tie?” Chapin muses. Chapin suggests that a test case like this only occurs in areas where members of the LGBTQ+ population might attend “luxury functions,” where one would be expected to wear formalwear — somewhere like San Francisco perhaps. How a dress code would apply there, “no one knows.”

After decades of usage, the male suit has become formalized to the point where the difference between black and brown shoes can be the difference between an invitation inside or a rejection. But formalwear can be individualised, and suit-wearing men do have a choice over their tie every morning. And if there’s more room for experimentation, perhaps there can be more room for everyone else.