After Virtual Semester, Freshmen Navigate the Pressures of Blocking 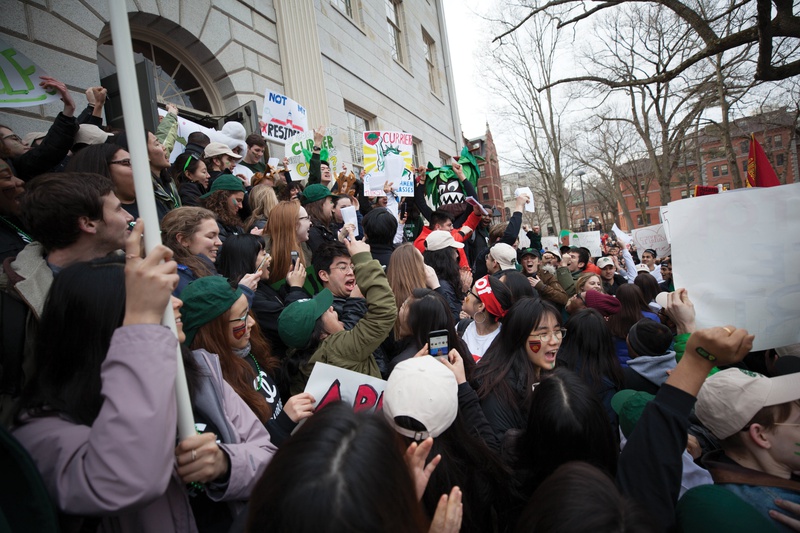 For members of the Class of 2024, the infamously stressful blocking process may be extra fraught due to pandemic-era social restrictions.

Blocking — the process by which freshmen choose the people with whom they will live for the rest of their College experience — commences after winter break, giving the new class ample time to explore connections and test out friendships throughout the fall. But this year, freshmen who studied from home — either due to personal choice or visa restrictions — had limited opportunity to forge relationships with their peers, whom they only glimpsed over Zoom or social media. Even those who spent the fall semester on campus said stringent rules around socializing and the dearth of in-person programming may make it more difficult to form blocking groups.

While the advent of the pandemic has exacerbated anxieties and uncertainties surrounding the blocking process, every class of freshmen traditionally harbors concerns about selecting the perfect blockmates to spend the rest of their undergraduate careers with.

Under the current blocking system, freshmen can either form groups of up to eight people or elect to block alone as a “floater.” Each individual or group is then sorted into one of Harvard’s twelve upperclassmen Houses, where they live for their remaining three years at the College.

The high-stakes social stress of blocking has only been amplified during a pandemic that as profoundly reshaped residential and academic life. After Harvard’s health guidelines rendered parties, study breaks, dinnertime conversations, library study sessions, and pre-class chatter obsolete, socialization among freshmen who resided on campus this fall became limited to small, socially-distanced outdoor gatherings.

Jordan J. Woods ’24, who spent the semester on campus, described the upcoming blocking process as “ominous.”

“I don't feel prepared for it at all,” he said. “Because of how difficult it was to really socialize and make friends.”

For international students — who were barred from coming to campus by visa restrictions — and for others who elected to stay home, the social scene was even more pared down. Instagram follows and text conversations replaced the outdoor gatherings and strolls along the Charles River enjoyed by their on-campus peers.

Anicia A. Miller ’24, a freshman from Chicago, expressed some of her anxieties about blocking as a student who stayed home this semester due to health concerns.

“I was concerned about it, because I'm a student who stayed at home, so I don't really know that many people,” Miller said. “I feel like that process is already sort of nerve wracking. Everyone’s still pretty awkward, not that many connections are that strong yet.”

Similarly, Thamina Noorzai ’24, an international student studying virtually from abroad, said she feels unprepared to jump into the blocking process after winter break.

“That’s one of the main annoying things, that only part of the freshman class could go to campus and not everyone being in the same boat. So I have no idea what to expect,” she said.

Though Noorzai spent the semester living with two fellow international freshmen in Barbados, she said that she doesn’t know enough people to make an informed decision around blocking.

“I feel like there might be people that I would get along with very well, but I just didn't have the chance to get to know them,” she said. “It feels so forced to just say, ‘okay, I know two people, so I'm just gonna have to live with them because I don't know anyone else.’”

Noorzai added that it was a struggle to get to know her classmates living on campus from afar.

“Maybe there will be people that you like on campus, but obviously, you're not going to be able to become friends with them right now,” Noorzai said. “Who's gonna want to Zoom in their free time instead of going out?”

Giulia F. Mazzarelli ’24, who tuned into campus from her home in New York, said she has struggled to gauge her fellow classmates’ personalities without in-person interaction.

“The only thing I see of people is how they are in classes,” Mazzarelli said. “They just might be different in person, and I don’t get that sense of what people are like beyond class.”

In an emailed statement, the Dean of Students Office acknowledged the challenges raised by Covid-19, but expressed faith that freshmen will be able to create bonds despite the circumstances.

“While there were restrictions due to COVID, this didn’t eliminate first-year students’ ability to still form connections with their peers,” the statement read. “We understand a global health pandemic is not an easy time to make in person connections and appreciate students abiding by public health regulations.”

On The Bright Side

Though the blocking process may look grim, many freshmen are choosing to focus on what they can control.

“I have been getting people’s phone numbers and stuff, you know, trying to do as much as I can to connect with people virtually,” Mazzarelli said. “I’m just going to try to keep a positive mindset about it, but I don’t know how it will go.”

Miller said solidarity and shared experiences among off-campus freshmen improved her outlook on the process.

“Within the community of students who did stay at home who were first-years, we've kind of grown stronger, a bit. So there's a possibility that I could block with someone there,” she explained.

Still, those living off-campus have not been forgotten by their Cambridge-based peers.

Tarina K. Ahuja ’24, who lived on campus this semester, emphasized the importance of forming friendships and reaching out to international and off-campus students. She said it was especially important to hold “real, genuine, and empathetic consideration” for these students given their lack of control over their residential circumstances, and said that she had been using Snapchat, Instagram, and text to connect with them.

“We've been trying to stay connected in random ways. But I just think it's really important to make sure that we still continue to form those connections because at the end of the day, we're all part of the same class, part of the same student body,” Ahuja said.

Freshmen both on and off campus have the support of their peer advising fellows, too.

“It’s definitely something that's on students' minds, particularly those who are living off campus and maybe haven't had the chance to meet many people,” said Ruth H. Jaensubhakij ’22, who serves as a PAF.

Jaensubhakij said she has been telling the freshman she mentors that blocking is not as important or binding as it may seem. Students are not even required to share a room with their blockmates, she noted.

“I'm hoping that that will alleviate some of the stress. So they know that even if they don't find someone or if there are people that they're not totally sure about, that it's not like you're forever bound to these people,” she said.

Huong T. Le ’22, another PAF, suggested that the College support freshmen by pushing back the deadline for declaring blocking groups and allowing more time for students to form friendships.

In addition to facing social restrictions, she noted, freshmen went home just before Thanksgiving, missing out on the last few weeks of the semester that they would ordinarily spend on campus.

“They were just on campus for two, three months, and it's just not enough for them to make friends,” Le said.

Miller similarly suggested that the College push back the group declaration deadline or plan a large number of events during the period leading up to students’ final decisions.

The Dean of Students Office wrote in its statement that the College expects freshmen to continue forming connections, albeit virtually, as most stay home during the winter recess.

“The College hopes students recognize that they will continue to get to know each other as the year progresses as even in years past, not all students know who they are blocking with by this point in the fall,” the statement read.

They also noted that the College will host a December webinar to answer student questions about the blocking process.

Some students, though, are already feeling prepared to embark on the blocking process.

Ahuja said she felt “insanely blessed” to have found people with whom she would enjoy spending her next three years at the College.

“I do, at the moment, probably have a good group to do a blocking group with, but I know that a lot of that happened by getting to meet people by chance,” she said. “Forming those connections over this past semester has just been a really beautiful thing.”