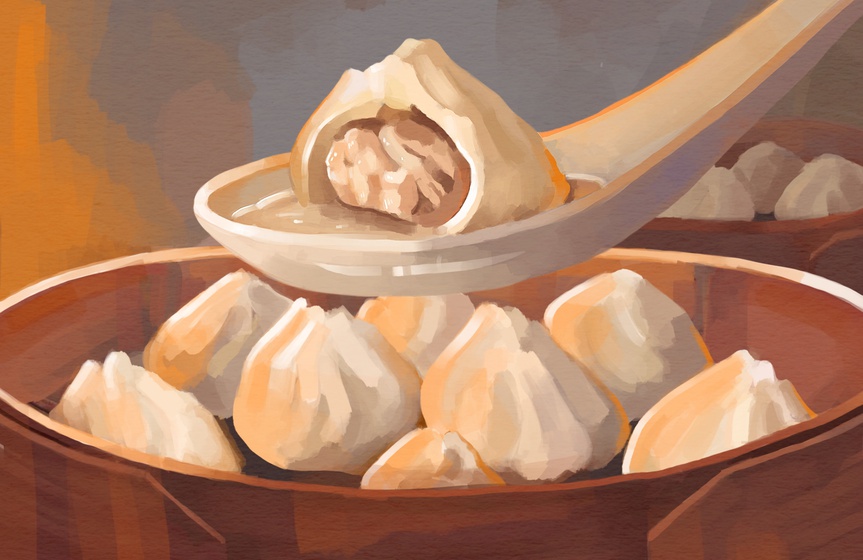 Sofia G. Montinola "Where do I fall, limited by words but bursting with passion and pride for my culture?"

Each cut of the scissors through the noodles effectively severed any connections I had hoped to make with the old lady through our shared cuisine, language, and culture.

Under the golden light of chandeliers swaying above a room full of chatter, I was drowning. I gasped for phrases, characters, any sound to latch onto and send rolling off my tongue to appease the stern old Chinese lady before me.

Five pairs of eyes followed my gaze, which had been fixated on a plate of pasty white flat noodles for the past two minutes. Memories of my father ordering dim sum — asking for dishes loaded with fish, pork, shrimp, noodles, rice — replayed in my brain like a series of silent movie clips. In my memories, every word dissipated with the sweep of his arm.

A sharp “Ni yao shen me, ya?” cut through the air, quickly followed by, “What you want?”

As if a pair of floodgates had burst open with these three words, I saw my fingers point. The words, “This one, please” rushed from my lips, followed by an embarrassed smile. Soon enough, the conversation turned to admiring the noodles, now jiggling in a pool of soy sauce.

But my feelings of loss, denial, and frustration were unshakeable. Snip, snip, snip. Each cut of the scissors through the noodles effectively severed any connections I had hoped to make with the old lady through our shared cuisine, language, and culture.

As my chopsticks rolled over the noodles, a shaky “Xie, xie, a yi” — thank you, auntie — was all I could muster. The old lady pushed her rickety cart farther and farther away.

Every Chinese class started with 15-minute character writing quizzes. Acing these quizzes was often the product of late-night cramming the night before, and my memory of the characters was as short-lived as the quiz itself.

As the warm sunshine beckoned us outside, my fellow ten-year-old classmates and I squirmed, glued to our seats for reasons we could not and would not fully understand: Somehow, our parents believed, these classes were critical to growing up as Chinese-Americans, even though America was an English-speaking country. This fact was so critical that we would be in Chinese school for nine years.

When I finally walked out the doors of my Chinese school for the last time — diploma in hand, certifying that I had completed Chinese school satisfactorily through the AP Examination — I felt free. I callously exclaimed “I’m done with Chinese!” in front of my parents. At home, piles of Chinese textbooks, handouts, and study guides flew off my desk, relegated to storage space or simply thrown away. Saturday mornings melted into “the weekend” proper, marked by a breath of relief instead of a sprint to the car. I didn’t know then that I was sealing away my Chinese language skills indefinitely.

Because reading, writing, and speaking Chinese were no longer needed for passing exams or speaking in class, these skills peeled away to make room for the American part of me. At home, conversations at the dinner table shifted from pure Chinese to Chinglish to English, my parents encouraging me to speak only English even as they replied in Chinese.

After all, my parents explained, they had immigrated to the United States from China not only to pursue higher education in freedom, but to raise kids who would be American — who could speak, study, and make relationships in English. Our Chinese culture, then, could be celebrated in other ways — through festivals like Lunar New Year, cuisine, and more. All of this can be done without mastering Chinese.

With little reason to object at the time, I was content to drift through the rest of high school with the long Saturday morning classes in Chinese school behind me.

“Yeah! I’m taking BX” — the introductory Chinese class designed for heritage learners — “and it’s so fun! I can’t wait to apply to Harvard Beijing Academy this summer. I really hope I can go.”

During many conversations I have with Chinese-Americans at Harvard, they express some variation of this sentiment: taking Chinese for the pure joy of learning Chinese, rather than to pass an exam. As I watch my friends’ faces glow with happiness and excitement when talking about Chinese class, as I listen to them rave about Chinese pop songs, I feel the urge to log into my.Harvard, enroll in a class, and finally give learning Chinese the attention and love it deserves. I feel worlds away from identifying as Chinese-American, alienated by a language barrier growing ever more impenetrable from years of disuse.

This year, I realized that something beyond the character strokes tested on Chinese school dictation quizzes was missing. A piece of my core identity as a Chinese-American had broken away. How could I consider myself Chinese if I couldn’t absorb and process the culture myself when spending time with relatives, watching Chinese shows, or reading Chinese newspapers?

When I first got to college, I thought attending cultural events and introducing my friends to “authentic chinese food” were simple ways to rediscover my Chinese heritage without language skills. But this has only served to postpone defining a clear answer to the question — am I even Chinese-American?

Where do I fall, limited by words but bursting with passion and pride for my culture?

At the end of the day, all it takes is a knowing smile.

An old lady approaches our table with a cart full of steaming plates of pastries and soups fresh from the kitchen. The golden light casts a warm glow in the room, illuminating every fold of the potstickers and every garnish laid carefully on the side.

Phrases, characters, and sounds threaten to slip my mind. But instead of turning away, dipping my head, and letting my parents order the dishes, I grasp onto the words as they tumble out of my mouth.

She carefully lowers the xiao long bao onto the table, drizzling the dumpling vinegar sauce into a plate on the side. Her fingers hesitate over the scissors tucked into the pocket of her white apron, then flutter away — the soup dumplings are small enough to chew, and cutting them would spill the indulgent, rich juice inside.

As I pop a xiao long bao into my mouth, the “hao chi ya” — delicious — naturally escapes as a satisfied sigh.

There is no set of universal rules that apply to being Chinese-American — we each have our own definitions. I’m no longer taking formal Chinese classes with my peers, but by dropping a phrase here and slurping up a bowl of zha jiang mian — black bean noodles — there, I am still actively reaching out to my Chinese heritage, character by character. I must embrace the two forces as shifting in a state of changing equilibrium, encapsulating the meaty juice of history and culture with the light, chewy skin of language.

There is no recipe — only the chef’s guarantee that it will be delicious and filling, giving me an identity to build upon, fold by fold.