Presidential Campaigns Gear Up for Massachusetts Primary on Mar. 3 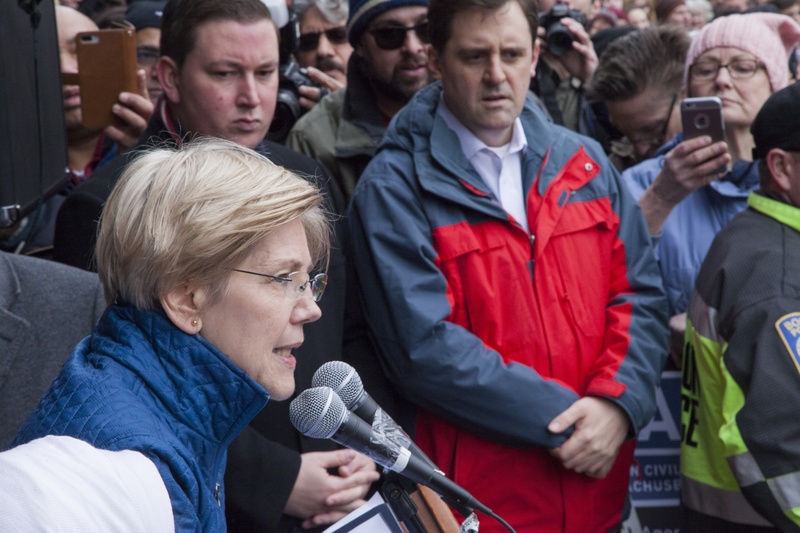 Of the seven Massachusetts politicians who have run for president since 1960, none have lost their home state in the primary.

For U.S. Senator Elizabeth Warren (D-Mass.), the pressure is on to continue that trend.

Thirty-three percent of the delegates to the Democratic National Convention are up for grabs next Tuesday — the largest haul of any single day to date. In Massachusetts, 91 pledged delegates are up for grabs — the fifth most of the any of the 14 Super Tuesday states.

Warren, a former Harvard Law School professor who has served in the Senate since 2012, has finished below 15 percent — the threshold to receive a delegate — in two of the three states that have voted. After receiving a bump in national polling following a strong debate performance last week, the Warren campaign is counting on Super Tuesday to rebound.

For the past several weeks, billionaire Michael R. Bloomberg has loomed large over the Democratic race as he has spent large sums of money and campaigned across the country — but has not appeared on the ballot in the states that have voted. Super Tuesday will serve as Bloomberg’s effective debut.

Warren has been mobilizing her campaign infrastructure in Massachusetts ahead of Super Tuesday, when Bay State voters will go to the polls along with 13 other states.

“We feel like Senator Warren has had the most touchpoints with Massachusetts residents,” State Representative Andres X. Vargas said. “Being the senator from here, folks have been able to get to know here better than anybody else.”

Vargas said that any endorsement bump Warren receives in Massachusetts is likely to come from the organizing ability of her surrogates.

Scott Ferson, a Democratic strategist who worked for the late U.S. Senator Edward M. “Ted” Kennedy ’54 (D-Mass.), said that Warren has the most robust campaign infrastructure of any presidential candidate in Massachusetts.

“There’s a very, very strong built-in infrastructure for Elizabeth Warren that existed for her first Senate race in 2012,” Ferson said.

Sanders, who has represented neighboring Vermont in Washington since 1990, has full-time staff in Massachusetts. His campaign has been ramping up its ground game in the state since the New Hampshire primary by hosting events and recruiting organizers.

Connolly attended a canvass kick-off event at Harvard’s Dudley Co-op Saturday where roughly 10 volunteers turned out to knock on doors.

Jason B. Kleban ’11, a Sanders volunteer who trained canvassers before they went door-knocking Saturday, said the campaign focuses on encouraging casual supporters to become more involved and volunteer.

“We’ve got a real grassroots movement here,” Kleban said. “The strategy is really just to activate as many people as possible to plug into the campaign, and not just commit to vote but to volunteer as well.”

Sanders blew away the Democratic field in the Nevada caucuses over the weekend, receiving support from 47 percent of caucusgoers.

Biden finished in a distant second place in Nevada.

Biden is relying on several high-profile endorsements from Massachusetts politicians, as well as support from five of the state’s labor unions to build his profile in the Bay State.

The former vice president has the backing of former Secretary of State John Kerry, who represented Massachustts in the Senate from 1985 until 2013, as well as U.S. Rep. Seth W. Moulton ’01 (D-Mass.) and U.S. Rep. Stephen F. Lynch (D-Mass.).

“Collectively, we’ve got support throughout the Commonwealth,” State Representative Brian M. Ashe, a Biden supporter, said. “I’m hopeful if people are watching and paying attention that they know Joe Biden’s the right choice.”

Biden’s path to the nomination has been complicated by the late entrance of Michael R. Bloomberg to the race. Bloomberg, a conservative Democrat who served as the mayor of New York for three terms, is out-spending his Demoratic rivals by a country mile.

He has poured a staggering sum — more than $450 million — into his campaign so far.

Bloomberg has focused his spending on Super Tuesday states in particular, where he has dropped $124 million on advertising alone. He has also centered on internet advertising and has spent nearly $42 million on Facebook ads.

Ashe said he does not think Bloomberg presents a threat to Biden in Massachusetts, but cautioned that Democrats nationwide should take him seriously.

“In Massachusetts, I don’t think it’ll have much of an impact,” he said. “I think Biden’s going to do very well here and I don’t think Mike Bloomberg’s going to take away from that here in the Commonwealth.”

“However, obviously [Bloomberg’s] a big presence,” he added. “When you have that kind of money and that kind of personality, people are going to take notice.”

Bloomberg came under fire from Democratic rivals at last Tuesday’s debate for his reported treatment of female employees, as well as for stop-and-frisk policing policies he enacted in New York that disproportionately affected African Americans.

He has built a large campaign infrastructure in Massachusetts, now boasting six campaign offices and 60 full-time staff members in the state.

“The biggest thing that we’re working on is connecting folks with a candidate who hopped in 13 weeks ago,” Bloomberg’s Massachusetts state director, Jordan Overstreet, said in an interview with The Crimson Sunday. “People see his TV ads, but I think it’s been very helpful that they’re also seeing people at their doors, too.”

Will Keyser, a longtime Massachusetts political operative who worked for Ted Kennedy and later as a strategist on Massachusetts Governor Charles D. Baker ’79’s Republican gubernatorial campaigns, serves as a senior advisor to Bloomberg’s Massachusetts operation.

Overstreet said the campaign plans to highlight Bloomberg’s childhood growing up in Medford, Mass., to show that he is “the epitome of the American success story.”

Buttigieg has also been working to grow his presence in Massachusetts. The former president of the Harvard Institute of Politics Student Advisory Council named three state co-chairs last week.

“He’s making sure that the strategy is focused on delegate pickup, which means no part of any Super Tuesday state is being left behind,” Maria D. Robinson, one of the state co-chairs, said.

Buttigieg, a former Crimson columnist, had strong showings in both Iowa and New Hampshire. He finished in a distant third place in Saturday’s Nevada caucuses.

“If you saw in Iowa and New Hampshire, the campaign went everywhere,” Robinson said. “It wasn’t just focused on getting a certain subset of voters. Part of Pete’s appeal overall is to get urban, rural, suburban voters, [and] all sorts of ages.”

Robinson stressed that Buttigieg is battle-tested and said he can unify the party.

“Michael Bloomberg can do really well in paid advertising, but when you actually put him up there against people who have been tested through the debate process, he’s not able to keep up with everyone who has gone through the fire,” Robinson said. “These folks, including Pete, have been campaigning for a year.”

Ferson said he expects the final week of campaigning to play a key role in determining the outcome in Massachusetts.

“It’s very much unsettled,” Ferson said of the race.