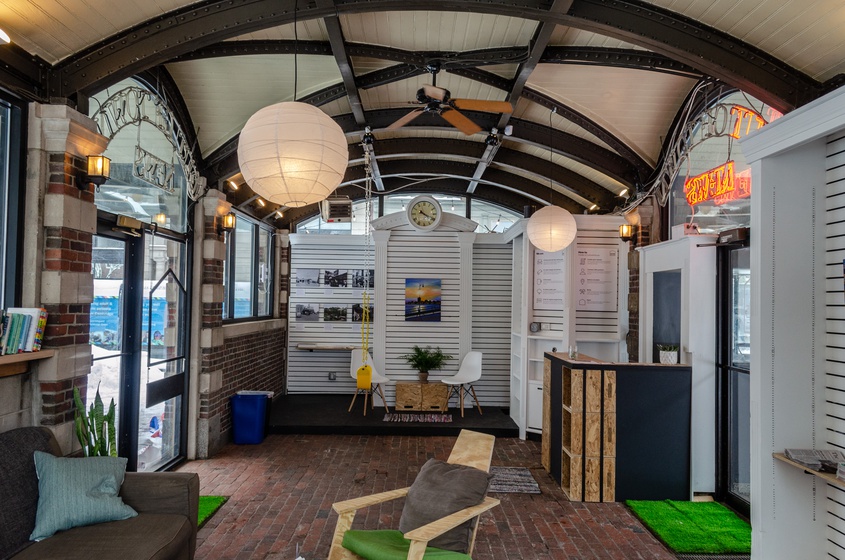 Courtesy of CultureHouse CultureHouse hopes to provide a gathering place that meets the needs of the community.

This is a CultureHouse “third space,” a place “between home and work to hang out, meet people, create, share skills, and learn,” its website states. Started in 2017, CultureHouse aims to “increase livability and joy in cities,” by designing free-to-use, public infrastructure projects that leverage vacant urban spaces, founder Aaron B. Greiner explains. The Harvard Square location is one of two temporary CultureHouse pop-ups in Cambridge; the other is in Kendall Square.

Searching for a newspaper on a Friday afternoon in February, I walked to the Out of Town News kiosk in the center of Harvard Square and discovered something I hadn’t expected. Instead of the magazines and cigarettes that used to line the brick walls, the T-entrance-sized box was now decorated with potted plants, a swing, wooden crates, and monochrome photographs on newly white-panelled walls.

About 15 people filled the space, and a woman who appeared to be some sort of receptionist was stationed at a booth near the door. There was not a single seat open. Some people leaned back with their eyelids shut; others spoke in low voices. A young couple cuddled. Teenagers scrolled on their phones. The books and board games displayed on the shelves were untouched. Everyone seemed to be…waiting.

This is a CultureHouse “third space,” a place “between home and work to hang out, meet people, create, share skills, and learn,” its website states. Started in 2017, CultureHouse aims to “increase livability and joy in cities,” by designing free-to-use, public infrastructure projects that leverage vacant urban spaces, founder Aaron B. Greiner explains. The Harvard Square location is one of two temporary CultureHouse pop-ups in Cambridge; the other is in Kendall Square.

Through such programming, CultureHouse hopes to “provide gathering places that meet the needs and wants of communities,” Greiner says.

Around 100 to 200 guests come through the doors of the Harvard Square location each day. Bianca M. Cruz, a staff member, describes the 15 to 35 people who come everyday for most of the day as “regulars.” Many of these “regulars” are youth experiencing homelessness, Cruz explains, and they may have nowhere else to go, given that “many shelters close during the day or other public spaces have banned them.”

Some of those 100 to 200 visitors are more affluent Cambridge residents. “A lot of [them] abstractly and nebulously really love this. They’ll come, say it’s awesome, and then leave and never come back,” Cruz says. A couple days later, I recall Cruz’s characterization as I watch a vested man with a Coop shopping bag on his arm wander in with incredulity. He begins to read the plaques beneath the artwork, as if surveying a museum exhibit, and then leaves quickly. He has somewhere else to be.

Cruz’s role is mainly one of management: She switches between the Harvard Square and Kendall Square locations, ensuring that community guidelines, like no sleeping and no large bags in the space, are followed. While her formal capacity is one of enforcement, she has found that over time, the frequenters of the Harvard Square location have become closer acquaintances.

She knows names and faces, and often will have conversations with people using the space. “One of the first things they say is, ‘We love you guys. This is the only place that we’'re not being served by somebody, or we’'re not being harassed by police or security or employees trying to kick us out,’” she says.

I talk to some of the people who often use the Harvard Square location — all of whom were experiencing, or had experienced, homelessness — and many express some kind of appreciation for the structure. But there’s only so much respite that this temporary haven can provide.

“This place is nice,” says Singer, a man who has been singing in the Square as a living since 1979.

“I’m just keeping warm,” says Felix B. McKinsey, a teenager who has lived in Cambridge off-and-on for two years.

“Mostly a place to hang out when I’m on a break from work,” says Nick O’Brian, an employee at Pokeworks.

“You’re guaranteed to see somebody you know,” says Kelly Coveney says. As Coveney sits, she cross-stitches Santa and his reindeers on a cloth pattern. Although she now shares a home with her husband and three cats, she is still in touch with Cambridge’s homeless community, particularly its younger members. “I try to point them in the right direction,” Coveney says.

Many of the people I speak with tell me that the swing anchored to the ceiling is especially treasured. As for the art lining CultureHouse’s walls, O’Brian explains that “it adds colour,” but he has admittedly “never actually taken the time to look at it.”

None of them have attended a scheduled CultureHouse event.

When it comes to designing a space, Greiner follows the slogan “Nothing about us without us,” coined by the disability movement. “We shouldn’t be assuming that we know what communities need without asking them and co-designing with them,” he says.

I ask Greiner about how CultureHouse gathers user input.“Mostly we do a lot of observations ourselves,” he explains. “People communicate in different ways.” While people are somewhat unpredictable, over time, CultureHouse staff has experimented with the arrangement of furniture, finding that a chair here or a table there impacts how people occupy the space. The perceived improvement of the space based on these changes, however, comes from staff rather than residents.

At the time I speak with Greiner, CultureHouse is preparing to change again. An art project by Lesley University students is underway, part of a larger scale renovation of the Harvard Square location. The project is titled “Belong.”

I return to the Harvard Square location after the weekend and everything has changed. The wallpaper is red, a table with coloring supplies has been plopped in the middle of the space, and a shiny aluminium photo booth that looks like a spaceship has replaced the beloved swing.

“I’m kinda mad at them for that; I’m very protective of my swing,” McKinsey says.

Today is Joshua D. Bowen’s first day visiting. He is a student at Lesley, and he’s in charge of the lighting. After spending the semester studying urban design, his class was given the option to collectively revamp CultureHouse as their capstone project. Similar to how CultureHouse changes their design, the students created “a checklist of what [they] wanted to do” in the CultureHouse space without a previous survey of the community users. But, Bowen explains, their design is “constantly changing based on feedback and different themes.” Some of that feedback is from CultureHouse users.

Pasted on the door of the Harvard Square location is an attractive event schedule. This week, guests have PechaKucha-style social commons, a Chinese ideograms teach-in, and a sound-bathing workshop to look forward to. The first event of the week is a soup tasting.

With COVID19 shuttering non-essential businesses, CultureHouse’s physical spaces are closed for the foreseeable future, but this hasn’t stopped them connecting on their “virtual pop-up,” CultureCloud, featuring links to online museums, a COVID- inspired photo gallery and their own webinars on topics such as Promoting Your Work Online. Quoting sociologist Eric Klinenberg, Greiner feels confident that “building places where all kinds of people can gather is the best way to repair the fractured societies we live in today.”