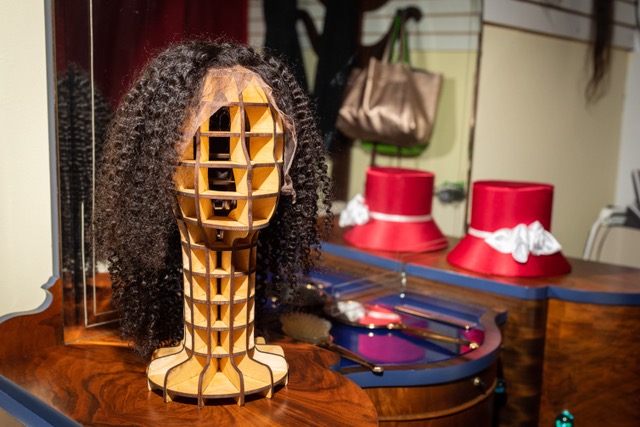 The Case for RepHAIRations Hair Shop

Mangcu, Adams, and Bailey grew increasingly frustrated with the lack of diverse hair care products in Arlington and Cambridge. Enter RepHAIRations, which opened its doors in Arlington on June 19 — Juneteenth.

When I ask Sipho Mangcu, Yvonne M. Adams, and Heidi F. Bailey what prompted them to open Arlington’s first Black hair shop, the co-owners of “RepHAIRations” flash me three exasperated smiles that seem to say, Where to begin?

“I lived in Cambridge and I had nowhere to go,” Mangcu reflects. “I couldn’t find a Black hair salon or a place where I could buy hair for myself or my eight-year-old daughter.”

Bailey expresses a similar sentiment: “You think it’s just hair, but when you’re talking about Black hair, there’s actually so many other pieces to it.” She reflects on a lifelong struggle of searching for hair products in stores like Target and CVS, and concludes: “It’s very important for me that my child has positive experiences with regards to her natural hair, and that she has places to shop that [are] also positive.”

Mangcu, Adams, and Bailey, who playfully describe themselves as “mom friends,” grew increasingly frustrated with the lack of diverse hair care products in Arlington and Cambridge. The three friends had little business experience between them — Mangcu worked as fashion buyer, Adams ran a pet sitting company, Bailey is an educator — but they eventually decided that enough was enough.

Enter RepHAIRations, which opened its doors in Arlington on June 19 — Juneteenth. The shop offers an extensive array of products for textured hair, as well as wigs, extensions, synthetic hair for braiding, and various accessories. In addition to providing these everyday items, the owners of RepHAIRations hope to supply their customers with conversation as well. The shop’s website features links to videos about racism and representation, articles about “blackfishing” and appropriation in the beauty industry, and even the 2019 Oscar-winning short film, “Hair Love.” The store boasts a small library of Black-focused reading materials, and the owners are eager to engage patrons in dialogues about their personal experiences with race. As advertised on the RepHAIRations website, the store strives to “provide a Black-centered space for ALL people [...] in which anyone can shop, discuss, question, advise, laugh and appreciate textured hair.”

“Often when I’m walking into spaces, I have to be super conscious of how I’m presenting,” Bailey explains. “What are people thinking? Am I saying the right thing? This is a space where you don’t have to do that. That’s the essence of what I mean when I’m saying ‘Black-centered space’: a space [where], as Black people, we can just be human.”

While COVID-19 has severely limited the scope of in-person gatherings, Mangcu, Adams, and Bailey ultimately envision RepHAIRations as a community hub for Black voices. They eventually hope to host speaker events and poetry gatherings and showcase the work of local artists. Perhaps even sooner, they plan to offer classes and workshops about understanding and styling Black hair. In the meantime, however, the mere presence of a Black hair shop has resonated deeply with the Arlington community.

“[For] Black people, it’s a sigh of relief! Like, ‘I can buy here!’ ‘You guys are here, I’ve never found a place here!’ So mostly very, very positive feedback,” Mangcu reports. “We also have white moms with Black kids [who] come in and they sit and try to learn how to do their [kids’] hair.”

Still, despite overwhelming support from Black and white patrons alike, Bailey admits that some initial critics questioned the necessity of a Black-centered shop in Arlington. According to the latest U.S. Census estimate, Arlington, which borders Cambridge to the northwest, is 80.56 percent white and only 2.66 percent Black.

“[People asked us], ‘Why would you open in Arlington when it’s 2 percent Black?’ Well, why not Arlington?” Bailey asks. “Dorchester, Roxbury, Mattapan [...] these places are majority Black and brown. When you’re a Black person who lives outside of those communities, it’s not easy finding your people.”

In the wake of this summer’s national protests over police brutality and systemic racism, Mangcu, Adams, and Bailey also view RepHAIRations as an opportunity to support Black lives by uplifting Black businesses. Making a purchase at RepHAIRations not only benefits the shop, but profits a string of other Black businesses and contractors.

“We use a Black-owned bank, we have a Black accountant, our graphic designer is a Black woman. Most of the products we sell are from Black owned businesses,” Adams says. “You can say Black Lives Matter all you want, but if you’re not financially supporting Black business, it really doesn’t matter. It really is about following the chain as long as we can to keep the money going in the direction it needs to go.”

As for the direction of RepHAIRations itself, Mangcu, Adams, and Bailey hope to keep expanding the business in spite of the pandemic. Their plans for community outreach may have to wait, but they say their mission persists in every customer who feels validated and represented by their store. As Mangcu proudly states, RepHAIRations is a space “to celebrate us and our hair.”

— Staff writer Vera E. Petrovic can be reached at vera.petrovic@thecrimson.com.