In ‘The Midnight Sky,’ Humanity is Doomed 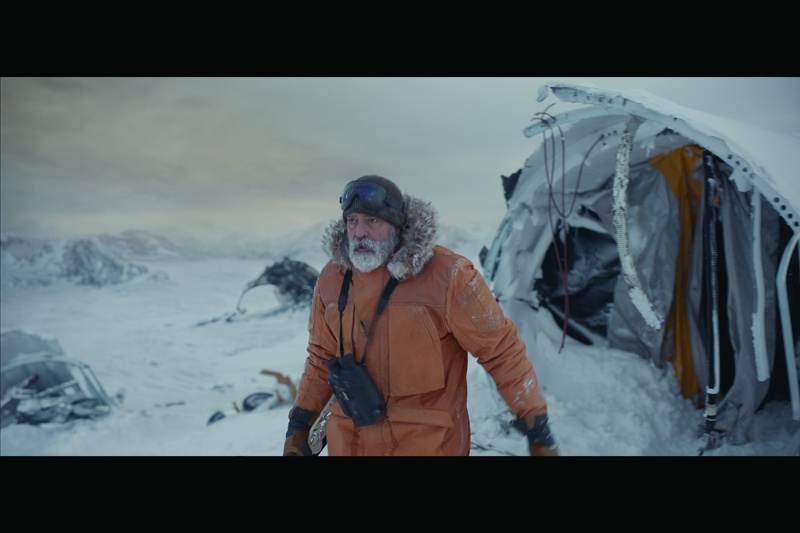 It is night in the arctic, and the ice has begun to crack. Augustine (George Clooney) desperately attempts to drive his snowmobile onto solid ground. As he revs up the engine, the ice below him gives and he goes under. For a moment he tries to go after the snowmobile. Tense music plays as he struggles to swim faster. Then suddenly, serenity; he stops fighting, and the music cuts out, and he watches the snowmobile slip underwater. This scene perfectly embodies the major themes of “The Midnight Sky.” When is it time to give up? And once it is too late to fix anything, what do you do next?

In “The Midnight Sky” (which George Clooney also produced and directed) the battle is over before the film even starts. Earth is no longer a habitable planet due to a sudden unspecified disaster. Humans are still around, but it is only a matter of time before everyone dies out. Augustine, a planetary scientist with a terminal illness, decides to stay behind at his arctic research facility, as everyone else quickly evacuates underground. Soon after, he discovers a little girl (Iris) has seemingly been left behind at the facility. Together, they embark on a mission to communicate with a group of astronauts who are still in space, warning them not to return to Earth in light of the catastrophic disaster. The movie splits its time between Augustine and Iris on earth and the astronauts in space, showing them as they grapple physically and psychologically with the imminent destruction of humanity.

“The Midnight Sky” is strongest in scenes where Clooney depends on striking visuals, rather than dialogue, to propel the story (such as the scene with the snowmobile). Under Clooney's direction, the bleak white arctic setting is rendered almost as other-worldly as the distant planet the astronauts visit. The images of Augustine and Iris making their way across this lifeless and seemingly endless landscape captures the desperation and even futility of their journey far better than any dialogue could. While both the arctic and space are shown to be harsh and deadly, Clooney portrays real beauty behind that harshness. Most strikingly, towards the end of the movie, the astronauts catch a glimpse of the earth engulfed in black clouds — polluted beyond saving. Even with the pollution, Clooney’s framing feels similar to that of “The Blue Marble” (the first-ever photograph of the planet from space). Earth may be distant and strange as it floats in a sea of vast nothingness, but it is still recognizably home. In using this reference, the earth Clooney presents remains awe-inducing, despite being in the midst of destruction. Through these images, Clooney is able to communicate one of the main arguments of the film: that even if everything is past saving, there is still something inherently beautiful and worthy about this planet and about humanity — in a film largely devoid of hope, it's a surprisingly moving takeaway.

Unfortunately, Clooney’s masterful visual storytelling is not enough to fill two hours of cinema, and the actual viewing experience of watching “The Midnight Sky” is a primarily dull one. This is partially due to the fact that Augustine is not a particularly compelling character. In the tradition of similar space movies like “Ad Astra,” Augustine is haunted by regret from having prioritized the search for a habitable planet over his relationships with loved ones. Clooney does not quite manage to capture this angst in his performance, and often comes off as more grumpy than haunted. No more interesting is Iris (Caoilinn Springall), his child companion who is functionally mute, occasionally cute, but mostly a bit off-putting. Iris and Augustine’s storyline is strongest in the more tense moments of the film when their relationship is used to explore what a parent’s responsibilities are if death is imminent. However, during the long portions of “The Midnight Sky” where the two are just spending time together, traversing Antarctica, the movie suffers pacing problems and lags horribly.

While the astronauts are much more interesting than Augustine and Iris, they don’t get significant screen time until the second hour. As a result, they never feel completely fleshed out as living, breathing characters. Still, thanks to solid performances including two standouts from Felicity Jones and David Oyelowo, the astronauts are charming, fun to watch, and move the movie forward in a way that almost makes up for the lethargic first half. Generally, “The Midnight Sky” gets better as it goes on. In fact, the highlight of the movie is its ending, which features a twist that is both heartbreaking and paints the entire story in a new light. Yet "The Midnight Sky" takes so long to get to this admittedly stunning finale that audiences are likely to have lost interest when the moment comes.

— Staff writer Mira S. Alpers can be reached at mira.alpers@thecrimson.com.