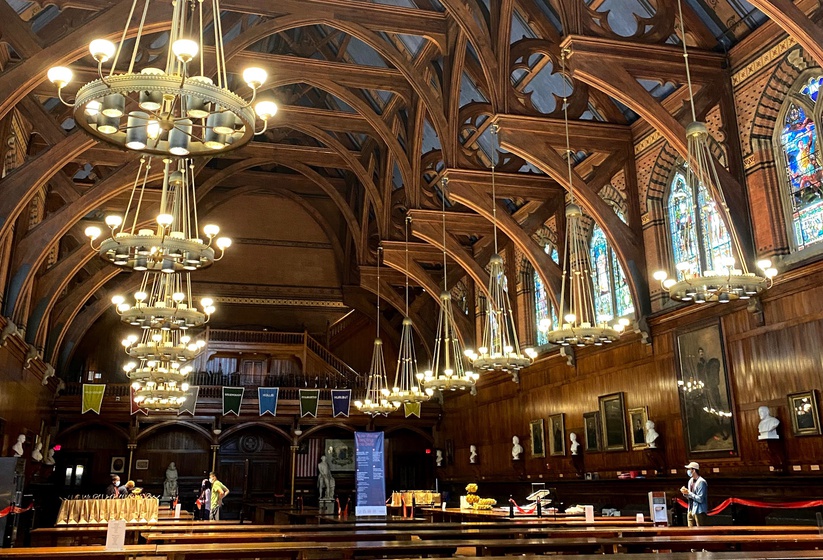 Magic in the Halls of Harvard

"‘It is required you do awake your faith.’ You have to buy into the theatrical illusion; you have to suspend your disbelief.”

Hogwarts and Harvard garner frequent architectural comparisons, and now it appears that magic is coming to our campus, as well. The Society of Harvard-Undergraduate Magicians, or SHAM, gathers both amateur and seasoned illusionists, cultivating magical interest and skills since 2019. This year, the club grew explosively, adding about 30 new members, meaning that the Great Hall and Annenberg are truly both the dining halls of wizards.

The club’s founders, Sam F. Dvorak ’23 and R. Taylor Kruse ’23, became friends at Harvard during their freshman year. Having performed magic for many years, Dvorak says meeting Kruse was a big deal for him, as he “had never had a good friend who was a magician before.”

“Magic was always sort of in my head,” Dvorak says. In middle school, he volunteered at his local library, where one day he got a job setting up chairs for a magic show. Just before the event, the magician taught Dvorak a classic card trick called the double lift. After learning that first trick, Dvorak practiced with a deck of cards whenever he had a free moment at the library. During the latter half of high school, he started performing more and even traveling for shows.

Kruse stumbled upon magic when he was in the first grade. He began performing tricks at his parents’ restaurant and bar, which served mostly adults, making his first few magic routines “trial by fire.” He jokes that the illusions may have been easier to pull off with many of his audience members already under the influence. Kruse continued to learn new tricks and improve his skills until the beginning of high school when he got busier and had less time to practice. It wasn’t until his junior year that he performed again, this time at his school’s National Honor Society talent show. “Doing that again really reignited the spark in me,” he says.

SHAM hopes to share this spark with its many new members. Dvorak attributes the large influx of magicians to the club’s ability to pub in person for the first time, and to chance: “There seems to be a disproportionate amount of freshmen who identify themselves as magicians,” he says. SHAM is expanding in other ways, too — the club has a new partnership with the Hyperion Shakespeare Company. This fall, SHAM will work as Illusion Designers on Hyperion’s upcoming production of “The Winter’s Tale” — like set designers, but for magic.

The partnership began when the show’s director, Abe S. Joyner-Meyers ’22, reached out to the SHAM co-presidents at the beginning of last summer to share his vision of incorporating magic into “The Winter’s Tale.” Although Dvorak and Kruse are heavily involved in the performing arts, they had never integrated magic and theater before. Yet they were up for the challenge.

Joyner-Meyers says he hoped to make the play “seem magical to the audience, to make it into a spectacle.” The idea “grew out of conversations with [Dvorak] and the other designers on the team into a vision of the show set in this almost circus-like performance space.”

A wide variety of tricks and routines will be used in “The Winter’s Tale.” Joyner-Meyers describes “classic street magic and card magic — like the three-card monte and cups and balls” as well as “magic that calls back to 18th- and 19th-century stage performances, including infinite cabinets.” The pièce de résistance will occur in the final scene, when a statue comes to life.

Still, Dvorak and Kruse’s approach is to tread lightly. “Abe is a fantastic director, and his staging is wonderful,” Dvorak says, “so how he stages the statue coming back to life will be very effective even without illusions.”

Joyner-Meyers attributes the innately magical experience of the show to Shakespeare’s original script: “Polixenes [the main character] has a line at the end of the play right before that culminating moment of magic, where he says, ‘It is required you do awake your faith.’ You have to buy into the theatrical illusion; you have to suspend your disbelief.”

Dvorak has a similar take: A magician is only as good as their acting abilities. “At the end of the day, there is no such thing as magic,” he says. “But what is actually magical is that split second after you do a trick when someone truly believes that they’ve seen something impossible.”

— Staff writer Dannie C. Bell can be reached at dannie.bell@thecrimson.com