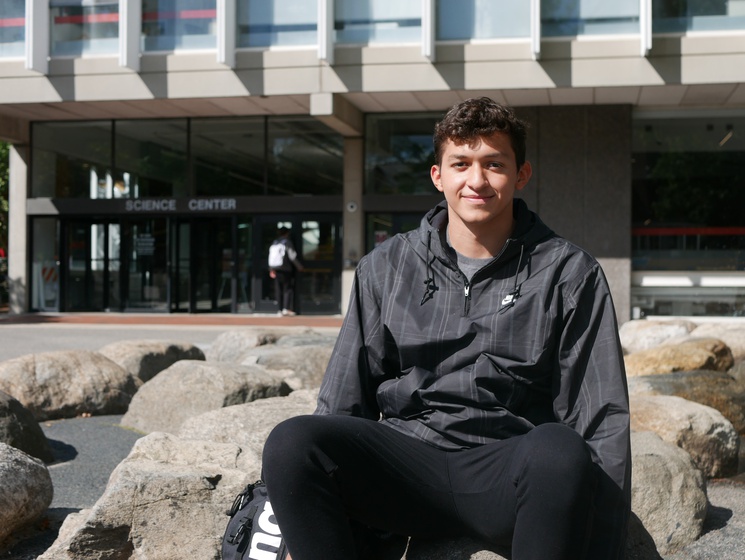 ‘Kind of Not Either’: Half-Freshmen Navigate Harvard

This year, as the half-freshmen return to a newly-revived campus or step foot on it for the first time, many report a disconnect from both their upperclassmen and freshman peers, a feeling exacerbated by logistical issues that remind the students of their in-betweenness.

“You're kind of both of them, but then at the same time, you're kind of not either of them. So it's hard to mesh with any specific one,” Anthony Rincon ’24-’25 says. Rincon, who opted to take a leave of absence during his spring semester of freshman year, calls himself a “half-freshman” — not quite a freshman, not quite a sophomore.

For Rincon, who competes on Harvard’s swim team, the choice to take time off was easy since the swim team cancelled its spring season. In order to maximize his eight semesters of NCAA eligibility, he decided to live off-campus with some of his teammates and train for the Olympic Trials.

And Rincon is no rare case: there are 50 half-freshmen currently on campus. After last fall’s virtual classes, lackluster social opportunities, cancelled sports seasons, and no guarantee of campus housing for the spring, some freshmen opted for an unconventional choice for their second semester at Harvard — they postponed it.

Anna V. Volpp ’24-’25 says that though she enjoyed living on campus last fall, the experience was “quite different than a normal school year would be.” Ultimately, she decided to take the spring off, obtained her Emergency Medical Technician certification, and worked at a healthcare clinic in Philadelphia. In her free time, she trained for and competed in a triathlon.

Hixon C. Foster ’24-’25, a student in the Harvard-Berklee dual degree program, says Harvard “didn't feel that real at all” during his freshman fall, since he chose to live off-campus to be closer to Berklee practice rooms. Eventually, Berklee also closed its campus to students, citing COVID-19 safety.

“In the intangibility, there were all these assignments and dates that were flying around my head, but I just got so overwhelmed by how none of it felt real yet,” says Foster, who chose to take a semester off to reorient himself before the fall, working on writing music and “​​getting through life.”

​​Sawyer B. Cooper ’24-’25 originally anticipated taking a gap year before matriculating — he wrote one of his Harvard admissions essays about his goal to take a gap year and conduct research on sustainable fishery. He later decided to enroll in the fall while searching for internships, but he eventually fulfilled his goal by taking off the spring semester to work as a research assistant at Stockholm University, studying Baltic herring.

This year, as the half-freshmen return to a newly-revived campus or step foot on it for the first time, many report a disconnect from both their upperclassmen and freshman peers, a feeling exacerbated by logistical issues that remind the students of their in-betweenness.

Annenberg, the freshman dining hall, is the hub of casual socialization for Harvard’s first year class. But the half-freshmen do not have swipe access, preventing them from meeting other first-years over meals and working on problem sets together under the hall’s arches.

Moreover, Carl Ma ’24-’25, an international student from China who arrived on campus for the first time this fall, says he was simultaneously invited via email to the convocations for both the classes of 2024 and 2025; the Dean of Students Office sent a follow-up email, instructing Ma to — in his words — “just go to the one you identify with.”

Even as they live, eat, and socialize in upperclassmen houses, Cooper, Foster, and Volpp are nonetheless anchored to the freshman class through their Expository Writing courses, required for all first-years.

Foster, who also took a gap year before matriculating, says it’s “strange” to be taking the course. “Sitting there about to be able to head out to a bar, and then seeing the 18-year-olds in my Expos class — it's very funny,” Foster says.

Yet, the half-freshmen also aren’t fully sophomores: their friends have progressed further along in their academic journeys and have locked in their concentrations, while the half-freshmen have until next March to declare their path of study at Harvard.

“You have the advantages of both [grades], but you also have the disadvantage of not being fully in each one,” Volpp says. “With my sophomore friends taking classes that are pretty deep, I still have to take a lot of pre-reqs or intro classes.”

Nonetheless, many of the students credit the irregularity caused by COVID as a factor that has ameliorated the oddity of being off-cycle.

“I feel like I've really remained in the class that I started in,” Cooper says. “Even though I took time off and everyone I knew basically didn't, we were all sort of in the same boat because no one was having the full normal college experience.”

Volpp, as well as many others, says that she doesn’t regret trading off another virtual semester for her off-campus escapades. “You only have this experience for eight semesters, so just try to savor it as much as you can,” Volpp says.

— Staff writer Andy Z. Wang can be reached at andy.wang@thecrimson.com.