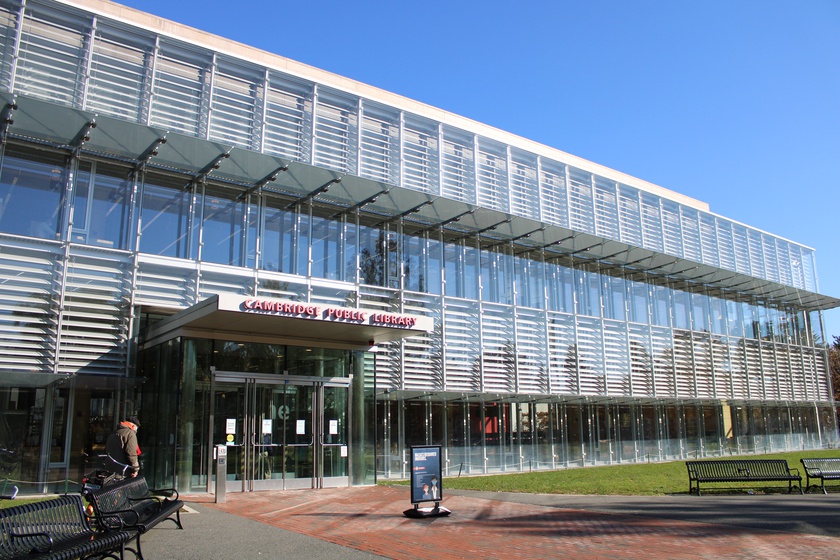 As of Oct. 19, the Cambridge Public Library has begun piloting a program to abolish fees on most late return items, excluding those borrowed through an interlibrary loan.

With its soaring windows, art-adorned stairs, and cozy study nooks, the Cambridge Public Library gives every appearance of a welcoming space. Yet over the past few months, the library’s management team and the city of Cambridge have been working to make it not only aesthetically inviting, but more financially accessible. As of Oct. 19, the library has begun piloting a program to abolish fees on most late return items, excluding those borrowed through an interlibrary loan.

CPL hasn’t charged its patrons late fees since March 2020, when Covid-19 shutdowns forced the library to shutter its doors and close its book collection sites. “It’s kind of a normal practice in any library that if there’s an unexpected closure for a snow day or construction or facility work, that it’s not a patron’s fault that they can’t return an item,” Joy Kim, CPL’s Deputy Director of Libraries, explains.

In October, the library took the additional step of waiving past charges from patron accounts. “That really offers people a fresh start,” Kim says.

The pandemic accelerated a transition that had been in the works since Feb. 24, 2020, when the City Council unanimously passed a policy order to explore the feasibility of completely eliminating fines. According to the policy order, late fees and damage and replacement costs constituted $77,870 in the fiscal year of 2019. The amount comprised a small fraction of the library’s total budget of $12.5 million, and extracting late fees from patrons came with its own costs: sticky conversations and strained relationships.

“When [patrons] go to check out, our system used to block them because they had too many fines, and then we would have a conversation: ‘To check out at the library, you need to have an account in good standing. Are you able to pay the charges?’” Kim recalls. “Some people maybe didn’t come back because they were just embarrassed or ashamed, or knew they couldn’t pay.”

Kim says that the City’s generous budget for the library is what made the switch possible. Library patron Elizabeth H. Sheild believes this is the way it should be. “Library expenses should be covered by taxpayers, not the fines of those who are trying to learn,” she says.

CPL’s pilot program comes as part of a larger movement among public libraries to increase financial accessibility. Large cities like Baltimore, San Diego, and Salt Lake City are already fine-free, and across the nation the Urban Libraries Council has identified (and mapped) at least 400 libraries that have made the switch.

Late fees “have the greatest impact overall on people from disadvantaged backgrounds, low income populations, and children especially,” explains Paul J. Negron, interim communications director at the Urban Libraries Council. “They are at odds with the libraries’ mission of promoting open and free access to information.”

While not all institutions are equally equipped to get rid of fines, Negron maintains that they typically make up a “negligible” percent of a library’s overall funding, and collecting them can be logistically cumbersome. “We’ve found that late fine collection can actually be really costly and can be hard to enforce,” he says. “It’s just not a sustainable source of library income.”

Furthermore, research suggests that fines do not serve as great incentives for library patrons to return their books in a timely manner. Instead, library debt forgiveness tends to lead to the return of overdue books and resources: The Atlantic reports that, “An amnesty program in Chicago brought in 20,000 overdue items; Los Angeles nearly 65,000; San Francisco just shy of 700,000.” To Negron and Kim, the value of returned items and goodwill with patrons far exceeds that of the money collected each year in fees.

“We saw that it really welcomes people into the library, and we also found that the books still came back,” Kim says.

The push for increased accessibility may be more important now than ever, as libraries have expanded their spate of services beyond providing books — they now offer computer assistance, children and teen programs, ESL classes, and more. “These kinds of things weren’t happening 15, 20, 30 years ago,” Negron says. “As we’ve expanded in the community and [continue to] play a greater role, we need to be connecting with those folks who need assistance.”

Libraries played a central role in CPL patron Gabriel J. Barrett-Jackson’s childhood, and he hopes that their resources can reach more people with the fine-free program. “I love libraries,” he says. “I grew up in Seattle and I attribute my public library there to a lot of my education. I think that library fees are regressive — they can be a barrier to folks — and getting rid of them is a good thing.”