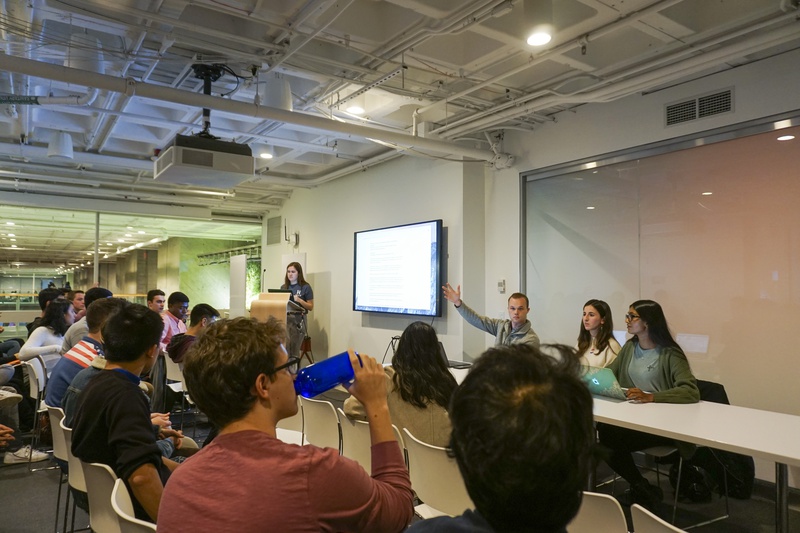 The Undergraduate Council had a weekly meeting on Sunday at the Issacson Room in Smith Campus Center Collaborative Commons.

The Undergraduate Council passed a modified version of a controversial constitutional amendment on Sunday after debating the measure during an emergency meeting Friday afternoon.

The amendment — which UC representatives began voting on on Nov. 21 — changes the voting thresholds for campus-wide referenda to take effect. As originally proposed, it would have required a majority of all students at the College vote in favor of any binding referenda. On Friday, however, the amendment was modified to lower that threshold to two-thirds of only voting students, as long as two-fifths of the total student body cast a ballot.

If a proposed binding referendum fails to meet that threshold, but is supported by a simple majority of voting students, it will pass as an advisory referendum, the modified version reads.

Votes on the measure were finalized during the UC’s regular meeting Sunday. Three-quarters of voting UC representatives must approve a constitutional amendment.

Before the amendment, the UC constitution did not clearly distinguish between thresholds for advisory and binding referenda — it merely noted that a “referendum/proposition passes if a simple majority of students votes in favor.” The binding referenda process is significant because it is a direct way for the student body to amend the UC constitution — circumventing the requirement of a three-quarters vote by the UC itself.

The amendment was proposed just eight days after Michael Y. Cheng ’22 won the UC presidency on a platform of making significant changes to the UC constitution.

Cheng alleged in a Wall Street Journal op-ed Monday that the proposal was an attempt by current leadership to “undermine the election results.”

“It’s an impossible threshold and in practice prevents any constitutional change that is not approved by three-quarters of all UC members,” Cheng said in an interview on Nov. 23.

Swanson said during Friday’s meeting that the amendment is a “check” to ensure that the student body cannot pass a “very dramatic change in the student government” without any ability for the UC to overturn it.

“If you read the constitution, you’ll see that the existing language for a binding referendum can allow a student to put an issue on the ballot to do anything in the constitution, including delete it, including write a clause that says, ‘I want all the money,’” Swanson said.

Harris and Gan proposed the modified version Friday alongside 14 co-sponsors.

“Nobody is out here saying we don’t want referenda,” Secretary Nicholas J. Brennan ’23, who co-sponsored the modified version, said in an interview. “We’re saying we don’t know if a referendum should automatically change the constitution at such an easy threshold.”

Brennan added that he believes the UC constitution needs work, but would like to see incremental changes made in cooperation with the UC, not unilaterally by the student body.

Cheng wrote in a statement after the meeting Friday that the modified version is a step in the right direction, but that the threshold should be lowered further.

“Once I am inaugurated on December 5, I will do everything possible to model the behavior I want to see as the UC’s leader. We need real leadership, and that requires imagination,” Cheng wrote. “But until then I unfortunately am stuck opposing wacky constitutional changes and so-called compromises.”

—Staff writer Lucas J. Walsh can be reached at lucas.walsh@thecrimson.com.