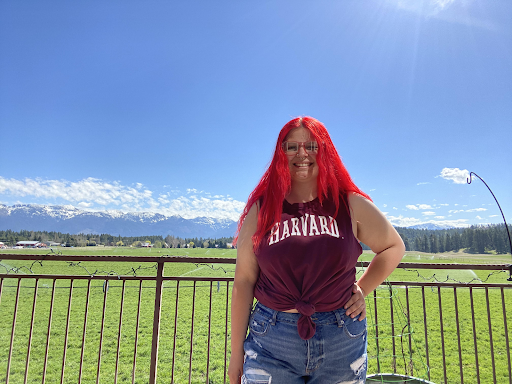 Quarantined While Queer: BGLTQ Student Support During the Pandemic

As BGLTQ students returned home during the pandemic, they confronted environments hostile to their identities — while also reflecting on how Harvard fell short, both on campus and off.

“I started crying, walking down the street when I saw Black Sheep Bagels and their [pride] flags” on Harvard’s campus, R. Elizabeth “Liz” Hoveland ’22 says. After living alone in her dad’s office building in Bigfork, Mont. during the pandemic, she returned to Cambridge this summer. “I went from a state where I thought I could get murdered for being gay, to being loved,” Hoveland says.

Just before June 2020, when the Supreme Court ruled that the Civil Rights Act protects BGLTQ employees from discrimination based on sex, Hoveland was fired from her job at a coffee shop in Bigfork. She believes she was fired because of her queer identity.

“They didn't outright say it,” she explains. “They said that they didn't like my lifestyle and my beliefs.” It was at that moment that Hoveland says she realized the extent to which she could not be herself in her hometown, a place she describes as extremely conservative and unaccepting of BGLTQ individuals. While in Montana during the pandemic, Hoveland says she struggled with situational depression and essentially “went back into the closet for about a year.”

Hoveland’s experience is not uncommon. According to the Trevor Project, a national organization focused on preventing BGLTQ suicides, 64 percent of BGLTQ-identifying youth who had to move home from college as a result of the Covid-19 pandemic say that the move negatively impacted their ability to express their identity.

Beth, a female student in the Class of 2022 who identifies as bisexual, said that moving from Tennessee to Harvard her freshman year came with a lot of freedom that she lost when returning home during the pandemic. At home, there was the constant, nagging hum of Fox News. There were frustrating microaggressions, like her father discussing how queer people “can get married, but they shouldn’t call it marriage.” There was the inability to participate in Zoom discussions about queer media for her English or theater classes, for fear of outing herself to her family.

However, even in Cambridge, there are moments that feel reminiscent of home, when Beth — to whom The Crimson granted anonymity for her safety and privacy — is reminded of the silent, but sizable population that does not support or accept queer existence.

One day, while walking by the Judy Jetson hair salon near Porter Square, Beth noticed that a window usually adorned by pride flags had been “brutally smashed.” Although she didn’t see the actual event, it made her realize that “people think like that here also.”

Following the onset of the pandemic, Kristin B. King ’24 spent time in their hometown in Wisconsin and then lived alone in Arizona beginning in 2021. Although King describes Wisconsin as “a fairly red area,” college campuses and university centers offer opportunities to meet other queer individuals near their home. However, there aren’t “a lot of older [BGLTQ] folks” and there is an absence of long-term community infrastructure in the state, they said.

After coming out as genderqueer their freshman year at a Catholic high school, being at Harvard meant not having to “fight for [them]self” and allowed them to “exist in a more comfortable space.”

Still, King emphasizes that the queer experience cannot be generalized. “We can't talk about the needs of queer students without talking to trans students, nonbinary students, students of color, and international students,” King says.

King explains the pandemic forced many students to find their own housing and build new support systems, and in their experience, they noticed there are limited and inaccessible resources for students like King who were on leave. They also explain that this situation could be uniquely challenging for queer students in unsafe home environments, unlike students of other marginalized groups who oftentimes share racial, ethnic, or socioeconomic identities with their families.

At Harvard, students have mixed responses to available queer spaces and resources — including queer group chats, queer parties, the BGLTQ office (known informally as the QuOffice), virtual Qoffee (Coffee) chats, social transition funds, CAMHS support groups, and a “Pride at Harvard” campaign in June that features students who want to be visually represented on social media or at Smith Campus Center.

This year, freshmen did not have a chance to connect with fellow queer students or faculty at more low-stakes in-person events, or to explore their identity in a new environment.

“There's absolutely no casual interaction,” says Sam, a student in the Class of 2024 who was granted anonymity by The Crimson to protect his safety and privacy. “You just don't see anyone unless you're actively reaching out and sliding into people's DMs.”

He recalls that while living on campus last fall, he “consciously” tried to develop relationships in which he could have conversations about “queerness and movies and media,” because he wouldn’t have that back in his rural hometown. Once at home, he says it was an “added stress” to have similar conversations on Zoom since his parents might be home, and he was not out to them.

“There was a required advising meeting, and they said everyone needs to be in a space where they can talk openly,” Sam says, describing the challenge of finding private spaces for conversations while at home during the pandemic.

In an emailed statement, Harvard spokesperson Jason A. Newton notes that to address this challenge during telehealth therapy appointments, CAMHS made accommodations “such as utilizing the chat feature during Zoom sessions or holding sessions over the phone so students could go for a walk to assure privacy.” Still, individual therapy sessions were not an option for many students living internationally or across state lines, due to the limitations imposed by licensing laws.

While support for the queer community takes different forms, sometimes powerful sources of support are simple, such as the web page “Out @ Harvard,” which lists faculty, staff, and graduate students who are publicly out. “Even if you never talked to [these queer Harvard community members] it's just being like, ‘there is a next stage in life,’” Beth says.

“Coming from the South, I'm not used to seeing queer people post-college,” she says, describing that she did not have any teachers or people in her professional networks who were publicly out until coming to Harvard. Her freshman year proctor, who also identified as first-generation, low-income, and queer, was instrumental as she sought to get situated.

Other sources of support such as the QuOffice are situated within a more complex history that illustrates how the college’s resources adapted over time.

Roughly 100 years ago, the Secret Court of 1920 — composed of five University administrators, including then-University President Abbott Lawrence Lowell, and Chester Noyes Greenough — put students on trial for their queer identity. The court conducted 30 interviews and expelled or severed the university’s association with students, a recent graduate, and a professor who were suspected of being queer. The court’s proceedings were uncovered in a 2002 Crimson article and significant progress has been made since these disturbing events.

In 1997, Harvard’s first Queer Straight Alliance was formed and the year after, a BGLT and Supporters Resource Center opened in the basement of Holworthy Hall. In 2009, Thayer basement housed a Queer Resource Center and 2011 marked the first time Harvard employed full-time, paid staff for the center. In 2012, the BGLTQ office officially opened in Boylston Hall, and moved to Grays Hall in 2017, where the office is currently housed.

Historically, college campuses and college groups have been important to gay liberation. University of Massachusetts, Amherst director of the Stonewall Center Genny Beemyn argues that gay activism from radical college students, especially at Cornell and Columbia as early as the late 1960s, laid the groundwork for widespread movements following Stonewall. Beemyn writes that these student groups asserted “a sense of pride in being gay” by sharing their personal experience and they “made gay liberation an important concern for many non-gay people.”

At Harvard, visibility looks different for each student. Hoveland says she loves the QuOffice but walking down the Grays basement steps while there are constantly admission tours, professors, and passersby at the crowded intersection nearby can feel like a “neon flashing sign” identifying her as BGLTQ.

Though non-queer allies are always welcome into the office, Hoveland says that resources could be made subtle for students who are not out and that the onus to seek queer spaces should not fall onto students. Additionally, these queer resources are not always integrated into the larger campus community.

“They [members of the QuOffice] do incredible work, but are those resources being shared by other organizations or other student clubs?” King says, describing the need for the College and its student population to commit to supporting queer students, regardless of the pandemic.

Hoveland shares the sentiment that the College could make supporting queer students a more widespread, public priority. For example, this could include simple, yet clearly visible signs of support, like a pride flag above the John Harvard statue or an email from Dean of the College Rakesh Khurana explicitly acknowledging the difficulties of queer students, she says.

Likewise, the college can work on more tangible inclusion efforts; for instance, the college’s IT department can work on ensuring that students can selectively change their name or pronouns in my.harvard without alerting their parents.

“I know a lot of people, myself included, who are more safe at school than they are at home,” King says. “We need to address that when students return to campus, a lot of students have really experienced a lot of pain in the last 15 or 16 months.”

Though the work toward liberation is ongoing and returning to campus will be an adjustment, there is much to rejoice in.

Hoveland says, “I'm so, so overwhelmingly proud of my identity, proud of my path, and proud of how many people have fought for me to have the rights that I do.”