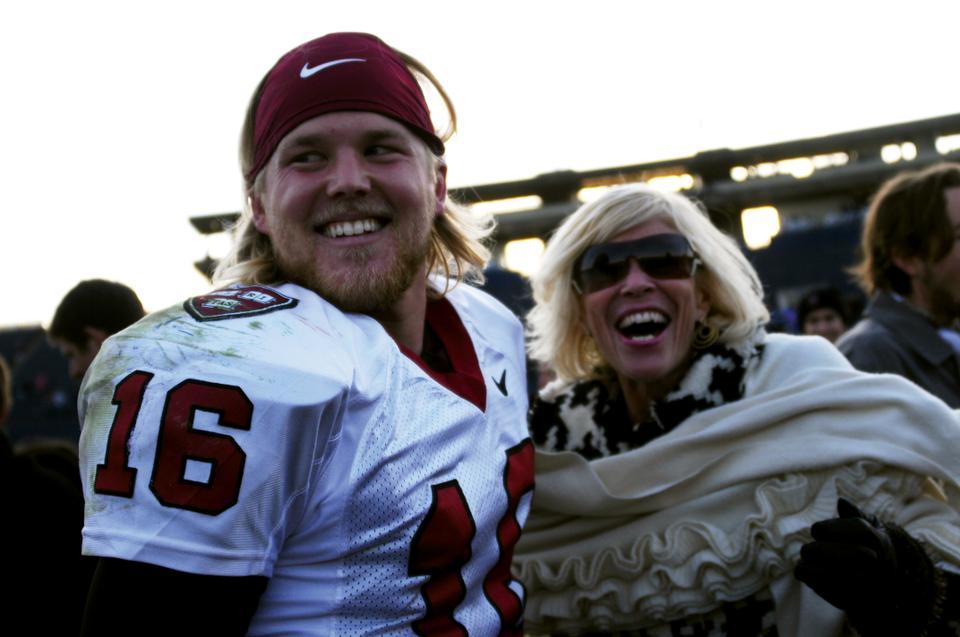 Quarterback Collier Winters, pictured above after leading Harvard to a resounding win in his final collegiate game, now has his sights set on playing football professionally. Winters hopes to play in either the NFL or the CFL. By Robert L. Ruffins
By Robert S Samuels, Crimson Staff Writer

While most Harvard students are preoccupied with acing a final project or exam,  a select group of Crimson football players have their sights set on a different goal, far from the confines of Cambridge and Harvard Stadium: Playing in the NFL.

In light of the NFL Draft, which runs from April 26-28, we discussed the latest draft news from defensive tackle Josue Ortiz ’11 and senior left tackle Kevin Murphy earlier this week. Now, we examine the prospects of the quarterback who led Harvard to three straight wins over Yale: Quarterback Collier Winters ’11.

Winters had a sterling 2011 campaign. In six contests, the senior went 5-1, threw 13 touchdowns against just 4 interceptions while tallying 1594 yards through the air.

And over the 2011 summer, Winters won the Manning Passing Academy’s “Air It Out” Competition, besting quarterbacks like Stanford’s Andrew Luck, who the Indianapolis Colts will reportedly take with the No. 1 pick in the draft, and Boise State’s Kellen Moore.

But for Winters, an NFL draft pick appears unlikely. On the Crimson’s 2011 roster, the quarterback is listed at 5’11”, a size many consider too small for an NFL quarterback.

“Collier’s probably a little bit of a long shot just because…the height. They really hold it against you,” said Harvard coach Tim Murphy following Saturday’s Spring Game. “Drew Brees is six feet tall, but it gets to a certain extent, they say, ‘He’s a Canadian League guy.’”

Winters acknowledges that his size substantially diminishes his draft prospects.

“There’s a good number of teams—well over half—that aren’t really giving me a shot right now because of my height,” Winters said. “It’s going to take the right team and the right situation for me to get a chance to get into the door, and the height obviously makes that window of opportunity a lot smaller.”

But despite his stature, Winters still has his sights set on the NFL, be it through a draft pick or a free agent contract.

The former Crimson standout signed with agent Michael Giorgio in January. After training in Kansas City following the 2011 season, Winters later came to Boston and took part in the Mar. 21 Boston College Pro Day, in addition to the Harvard Pro Day a week later. Winters believes that both pro days went well.

Leading up to the draft, Winters has received attention from a handful of NFL teams, including the Tennessee Titans, the Atlanta Falcons, and the Tampa Bay Buccaneers.

“Tampa Bay has been the most interested, and I know their quarterback position has a few openings,” Winters said. “That would probably be the best situation for me, so I’m hoping that works out.”

If Winters goes undrafted, he will attempt to sign as a free agent shortly after and partake in the team’s minicamps.

And if the NFL falls through, Winters will look north to the Canadian Football League.

“A couple [CFL] teams have called expressing interest, but their draft and their signing and everything is after the NFL draft,” Winters said. “So hopefully I’ll hear something from the NFL, but if not, then the CFL would be the next step.”

Whether the NFL comes knocking or not, Winters’ former coach has faith in the quarterback who led the Crimson to three consecutive wins in The Game.

“The thing that Collier had, that was probably as good as any quarterback we’ve had here, including [Ryan] Fitzpatrick [’05]. His accuracy and his quick release were phenomenal,” Murphy said. “If he was 6’3”, he’d be getting drafted.”

“I guarantee this,” Murphy added. “Collier can really play the game. That guy can play.”