On studying Harvard at Harvard 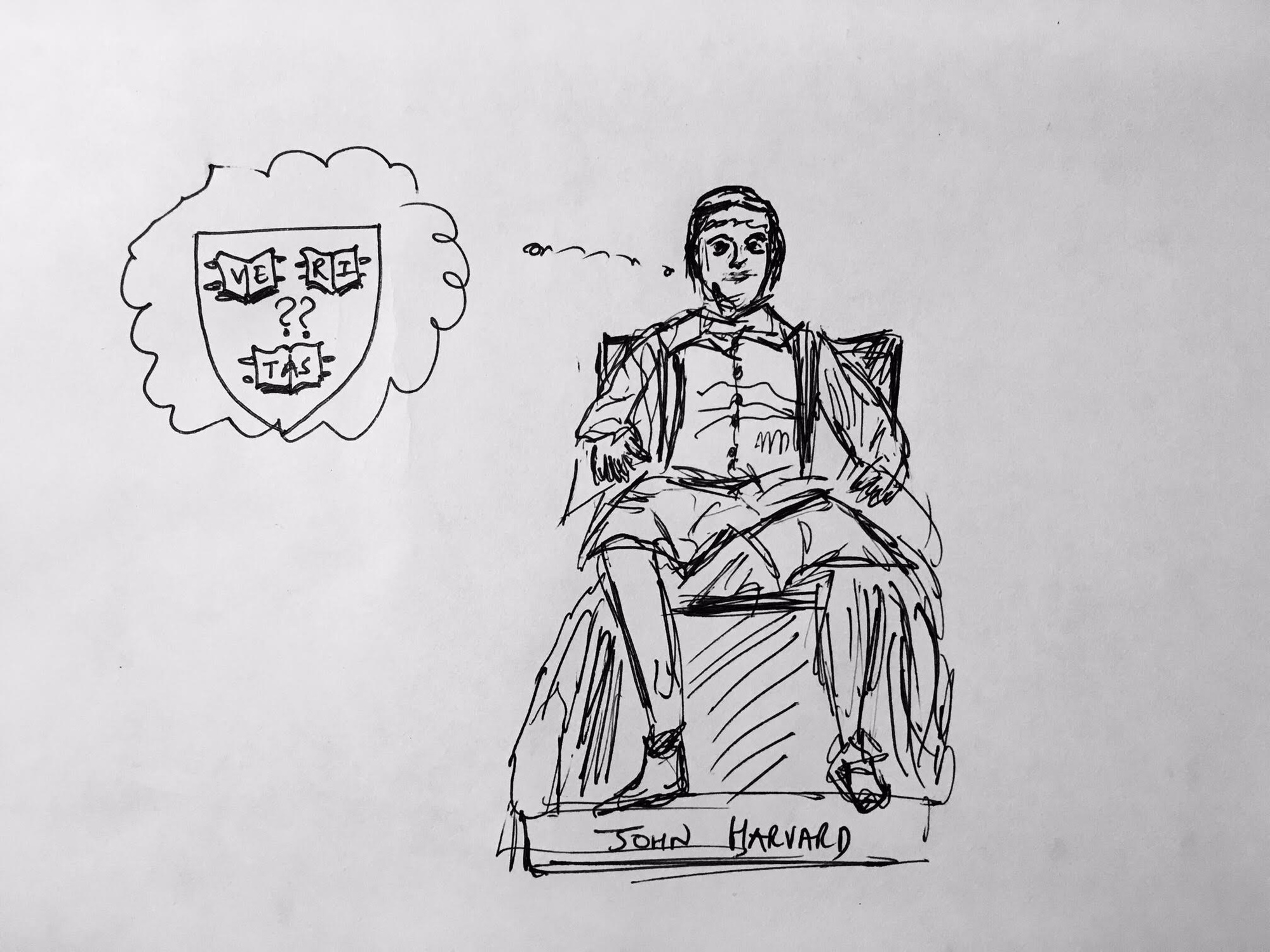 It’s a Wednesday afternoon. John’s glowing toe entices crimson-clad visitors outside, but shadows dim the wood-paneled seminar room. Already, the students are all sleep-deprived—the handful of first-years and sophomores, the senior, and Brown Girl. It’s mostly because this week’s hist and lit assignment has been a trying one: read “The Chosen.” The book, the students find, devotes 557 pages of research and 152 pages of notes to the Big Three’s “hidden history of admission and exclusion,” with Harvard consuming a substantial portion of it.

It begins by observing the writer’s task, something about making the strange familiar and the familiar strange. Then comes the description of a gray-eyed, “self-possessed” freshman with pince-nez glasses and “patrician features.” Soon, we see how the resentment that accompanies his rejection from the “venerable Porcellian” gives way to an “inferiority complex” that—his wife recalls some 30 years later while he’s negotiating the New Deal—“helped him to identify with life’s outcasts.”

It continues like this, reading like a series of Crimson headlines interspersed with fraying diary entries: anecdotes of FDR navigating the final club scene and President Lowell institutionalizing anti-Semitism, of Harvey Mansfield shuddering at the thought of coed classrooms and interviewers rating applicants as “frumpy.”

It continues like this, the onslaught of narratives—at once antiquated and contemporary, distant and near.

In the fall of 1918, a young pianist enrolls in Radcliffe. She has an ear for German and music composition, her professors observe, and—after she’s admitted into acclaimed poet and journalist Charles T. Copeland’s workshop—it’s clear that she’s talented at prose as well. Boston-born and Brookline High School-bred, Marita Bonner publishes her first essay a few years later. In “On Being Young—A Woman—And Colored,” Bonner writes of “Youth,” its carelessness and frivolities, its ability to make a growing girl forget, at times, the hue of her skin. She writes of promptly remembering while riding in a “Jim-Crow train" and receiving a “petty putrid insult.” She writes of “craving to pass for Ariel,” compares it to an “empty imitation of an empty invitation.” She questions if “color is, after all, the real bond.”

In the fall of 2015, Brown Girl and her friend (another Brown Girl) explain why they won’t punch. Their brown punch masters frown, send polite requests to meet, then frown some more. There is more politeness, too—talk of “buying-in” and safe spaces, of burnt punches and image selection, of feeling personally victimized and feeling misunderstood. There is never a resolution offered or made after hugs are exchanged and hands waved. There is only the prospect that another one of these discussions will happen again sometime, that others are happening right now, even—behind closed doors, in cultural group meetings, during the wait to get into the Spee.

Brown Girl and Fam sit in gray couches facing windows that overlook a quasi-garden. They try to avoid looking at the suspicious stains on which their arms rest and instead listen to the pop hit blaring from the barista’s laptop. It slowly fades into a weak bass, and so the bros chatting while waiting in line to use their Board Plus form the soundtrack to which Brown Fam types their papers. They hear mention of Harvard-Yale, Ec 10, and “that butch girl who probably pees standing up.”

During her final year at Radcliffe, Adrienne Rich ’51 wins the Yale Series of Younger Poets for her first collection, “A Change of World.” Auden judges the competition. “They speak quietly but do not mumble,” he writes of her poems. “They respect their elders but are not cowed by them, and do not tell fibs; that, for a first volume is a good deal." But Rich’s writing, much to her chagrin, isn’t a good enough deal for the college’s revered literary magazine. Upon observing the Advocate’s insular culture, she privately puts pen to page, fuming. “Harvard’s message to women was an elite mystification,” she fumes, in which “the ‘great men’ talked of other ‘great men,’” It is only eighteen years after she graduates that the Pegasus accepts her poem “Face to Face.” "How people used to meet!” goes a latter stanza. “Starved, intense, the old/ Christmas gifts saved up till spring, / and the old plain words."

Though hazy clouds of smoke blur Brown Girl’s senses, she manages to squeeze into the cramped kitchen where a few back issues lay strewn. She has endured such a comp meeting once before, so she doesn’t flinch this time around when she hears how these walls have honed Steven’s “juvenilia” and Rich’s, too. But still, her heart lurches in a painful brag; “I am, I am,” she breathes. “I am not comfortable here.” She seeks solace by staring into the candlelight illuminating cracked and empty wine bottles. The stiff gaze of a hanging deer head bust stares back until Brown Girl becomes cross-eyed.