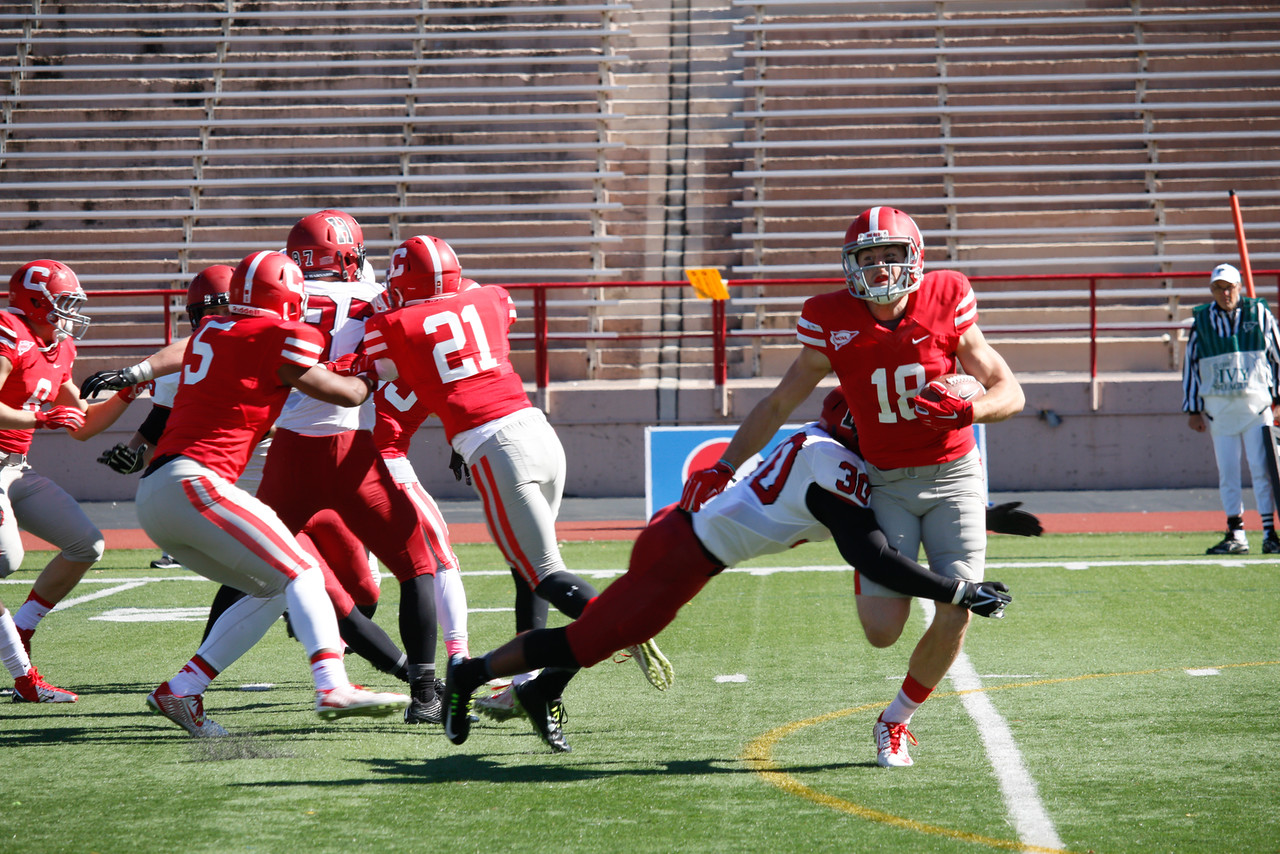 The Crimson defense, shown in previous action against Cornell on Oct. 10, 2015, held the Lafayette running game to negative 18 yards and kept the Leopard offense out of the end zone. The question is whether the defense will hold up as well against stronger Ivy competition to come. By George J Lok
By David Steinbach, Crimson Staff Writer

Readers of this column may recall that, two weeks ago, its lede included the following statement attributed to Harvard football coach Tim Murphy: “The bottom line is, the preseason’s over.”

Well, this reporter is still waiting for that moment, because it certainly hasn’t arrived yet.

The Crimson has taken the field five times in 2015. All five games have been Harvard routs, with an average margin of victory of 36 points. Halfway through its season, the undefeated Crimson hasn’t faced an opponent that can compete with the team for one quarter—let alone an entire game.

Following Murphy’s pronouncement of the preseason’s conclusion, Harvard dominated an overmatched Cornell team, 40-3. This past Saturday’s 42-0 trouncing of Lafayette was just the latest example of what Harvard fans have grown accustomed to seeing.

The visiting Crimson amassed 500 yards of total offense. Lafayette registered negative 18 yards rushing. Harvard converted 14-of-20 third downs and had five different players score touchdowns. The Leopards advanced into the red zone only twice and had nothing to show for it. The disparities go on and on.

No one truly expected the contest in Easton, Penn., to be competitive. No one was mistaken. Once again, the Crimson was simply on a different level than its opponent from start to finish.

So, it seems appropriate to wonder: when will the preseason actually end for Harvard football?

Will it be this coming Saturday against Princeton? In recent seasons, the Tigers have played the Crimson extremely tough, with the notable exception of their 42-point defeat last year in New Jersey. Keep in mind that Harvard’s last loss came in 2013 at the hands of Princeton.

But the Tigers have exhibited signs of weakness so far in 2015. Princeton narrowly escaped an upset three games ago at the hands of lowly Columbia in rainy weather. This past weekend, the black and orange faltered late and fell at the hands of Brown, 38-31. For context, Harvard thrashed the Bears by 26 points in week two, with most of Brown’s points coming against the Crimson’s second string.

Of course, Harvard can’t afford to overlook Princeton. And a coaching staff that takes every opponent seriously certainly won’t. But it seems a stretch to say that the Crimson will encounter an equal foe when the Tigers come to Cambridge on Saturday.

So, once again, when will the preseason end? Answer: in week seven. Against Dartmouth.

For the first time, Harvard will face a worthy adversary. Indeed, despite the absence of a championship pedigree for the Big Green in recent years, the Crimson would be wise to look at Dartmouth as an equal.

Harvard’s offense has been historically dominant over the first five games of the year. It is averaging 44 points a game, good for the program’s best mark since 1892. (That’s right, 123 years ago.)

But Dartmouth’s attack may be equally prolific, and it all starts with senior quarterback Dalyn Williams. The NFL prospect has made just about everything look easy so far this year, and his dual-threat running and passing ability has propelled Dartmouth to a 5-0 record.

Perhaps the Big Green’s most complete performance came in a 35-3 drubbing of Yale two weekends ago. Williams threw for a school-record 435 yards and four touchdowns.

So, yeah, the Dartmouth offense is pretty strong. But the team’s defense is intimidating in its own right, ranking just behind Harvard with a meager 9.4 points allowed per game.

If you’re a true Crimson fan, you’ve had this game circled in red on the schedule before the season even began. The championship race in the Ivy League will swing significantly based on the outcome of the heavyweight battle next Friday under the lights of Harvard Stadium.

This Saturday against Princeton could end up as just another rout, or it could mark the first game of the year when the Harvard starters aren’t removed in the second half. Who can say for sure? Either way, though, the preseason will come to a definitive end on Oct. 30 against the Big Green.

And it couldn’t come soon enough.

The 2015 Harvard football team has been so dominant that we haven’t once seen the unit tested. We’ll soon find out what kind of team the Crimson is when it’s thrown into the fire.