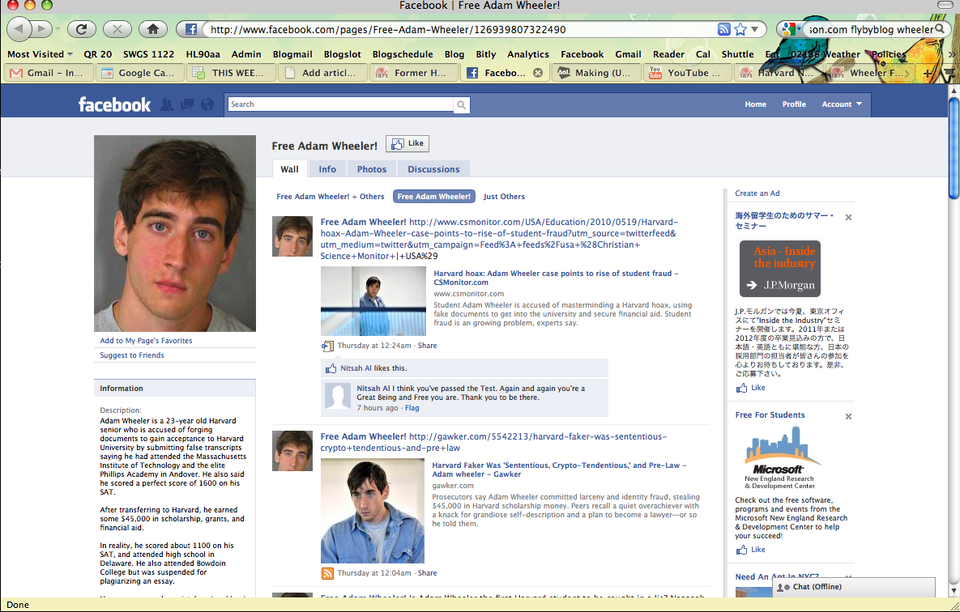 Despite the fact that Adam Wheeler has been charged with larceny, identity fraud, falsifying an endorsement or approval, and pretending to hold a degree, he might actually have supporters. There is now a Facebook fan page called "Free Adam Wheeler!" that has, in its description, a summary of Wheeler's crimes but ends with what seems to be the premise of the fan-page: "Hey, everyone makes mistakes."

At the time this post was written, the page had 330 fans. Many of the fans are residents of Delaware—where Wheeler actually went to high school—or students who attended Harvard at the same time as Wheeler.

Erika L. Zeiters, a fan who said she was in Wheeler's grade at Caesar Rodney High School, wrote to us in a Facebook message that she and Adam dated for a very brief time in ninth grade but continued to be friends during the next few years. "In high school, he was a really nice kid," she said. "He was quiet and shy, but super nice and funny. I never saw any signs of him as being weird or lying." Zeiters said she joined the Facebook page because of her connection to Wheeler, but she added that she does not know who created it.

Most of the fans, though, do not seem to be acquainted with Wheeler. Many of them humorously admire Wheeler's cleverness—one fan even compared him to Frank Abagnale, whose trickery was dramatized in the movie Catch Me If You Can. Other fans, in response to a status update stating that Wheeler is being held on $5000 cash bail, volunteered to donate money to get him out of jail. One ambitious fan suggested that she could even sell her PS3 to raise money for the bail.

But not all fans appear to admire Wheeler. As one put it, "I would say that what Adam Wheeler has done is more than a 'mistake'. This was a deliberate scheme to lie his way into a school. He used scholarship money that he didn't deserve (meaning that money was taken away from honest students who really did deserve it), and I hope that he is prosecuted for his actions to the fullest extent."

Anyway, if you still have Wheeler fever (but have already seen his resume, read every article about him, watched all related videos, and bought yourself a "Free Adam Wheeler" T-shirt), this Facebook group is one more piece of Wheeler mania to check out.