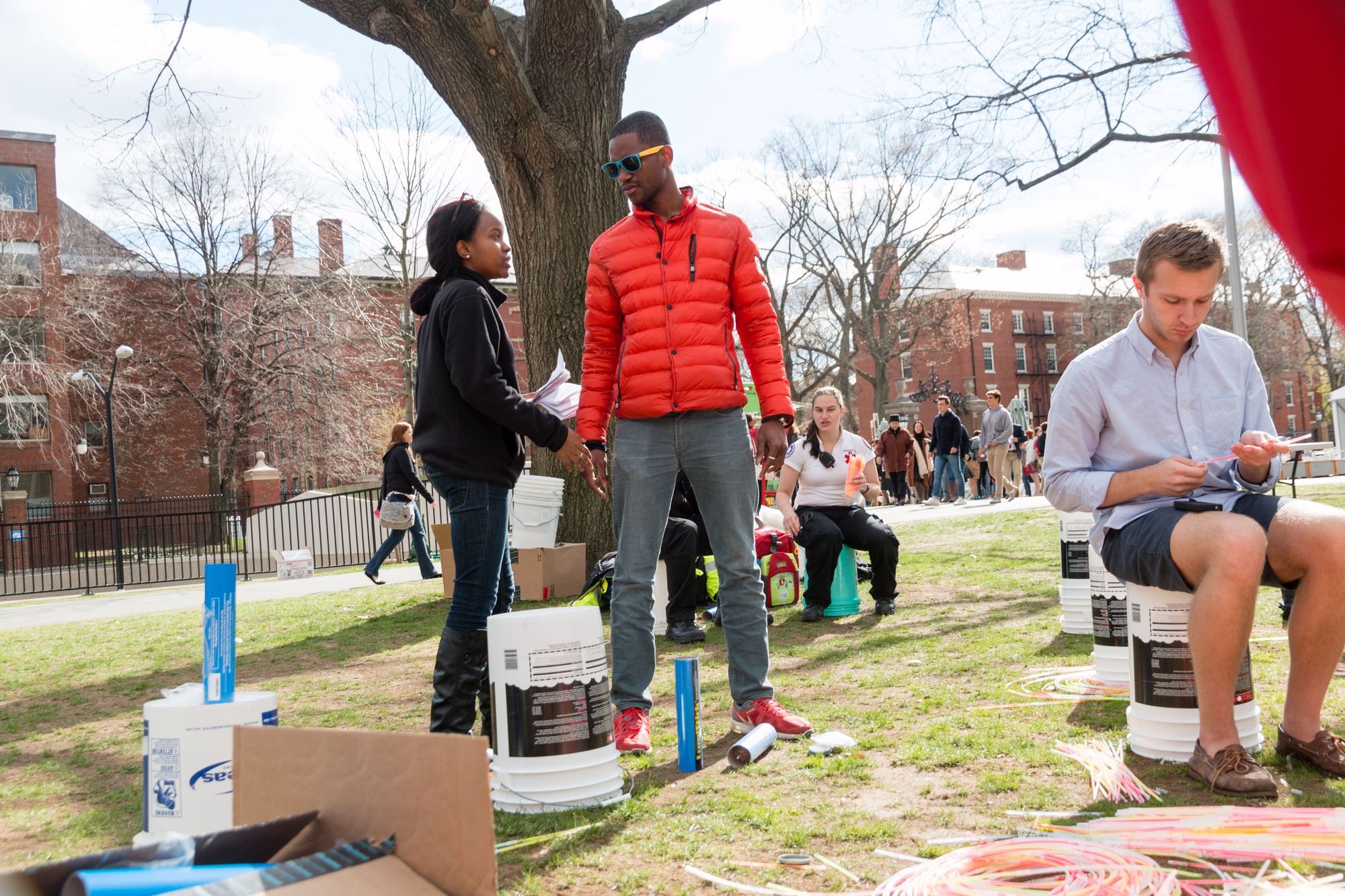 One of the founders of Students Against Malaria, Mohammed A. Toure ’16, and one of the event organizers, Kimberly S. Mihayo ’15, oversee the attempt to break the record for the longest chain of glowsticks. CORRECTION: An earlier version of this caption misidentified Kimberly S. Mihayo as Tiana J. Raphel. By George J Lok

Happy Monday, Harvard! Welcome to the last week of classes (read: three days)! There are only three days of classes left this semester (we obviously have not been counting down for the past few weeks). That is a scary short amount of time before we really need to get down to business for finals, but if you start now, you just might be able to convince your TFs that you need extensions on all of your final projects. That will leave plenty of time to start and finish some new show on Netflix during reading period.

It’s going to be in the mid-50s today, but bring a jacket because it’s supposed to be cloudy with a chance of rain later in the afternoon.

Guide To Getting an Extension — important information going in to finals!!!

In Attempt To Break World Record, Students Host Malaria Awareness Event — “With the goal of raising awareness about malaria, Harvard College Students Against Malaria attempted Saturday to break a world record for the longest chain of glowsticks by linking more than 10,000 glowsticks together in the Science Center Plaza. The event, entitled the "Harvard One Campaign," coincided with World Malaria Day.”

In a Harvard T-Shirt, Jessie J Takes the Yardfest Stage — “British pop artist Jessie J took the stage in pink hair and a Harvard T-shirt for the College’s annual Yardfest concert in Tercentenary Theater on Friday, although for some concertgoers, the student bands who opened the show were the highlight of the evening.”

The Charles Hamilton Houston Institute will be holding a screening and discussion of Our Mockingbird in Wasserstein Hall Room 1015 in the Law School.

Harvard Art Museums will be holding a seminar about the role of museums in talking about social experiences. 6pm in Northwest Labs B103.

The Harvard Film Archive will be screening Club Sandwich at 7pm. Tickets are $12.

Harvard College Stem Cell Society is hosting professor George Daley at 7pm in Sever 110. He will speak about the future of stem cell therapeutics.

Harvard LITFest begins today in Sever 113 at 8pm. Matthew Weiner, the creator of Mad Men, will be speaking.

Middletown is being performed on the Loeb Mainstage at 8pm. Tickets are $8 with HUID.

Emory University Law School professor Abdullahi Ahmed An-Na‘im will give a lecture, entitled Sudan: Learning from 30 Years of Islamist Revolution, Rule, and Reform. The free event will take place at 4pm  in the Fainsod Room at the Harvard Kennedy School.