You Wish You Had an Electric Unicycle Like Marwah W. Sabrah 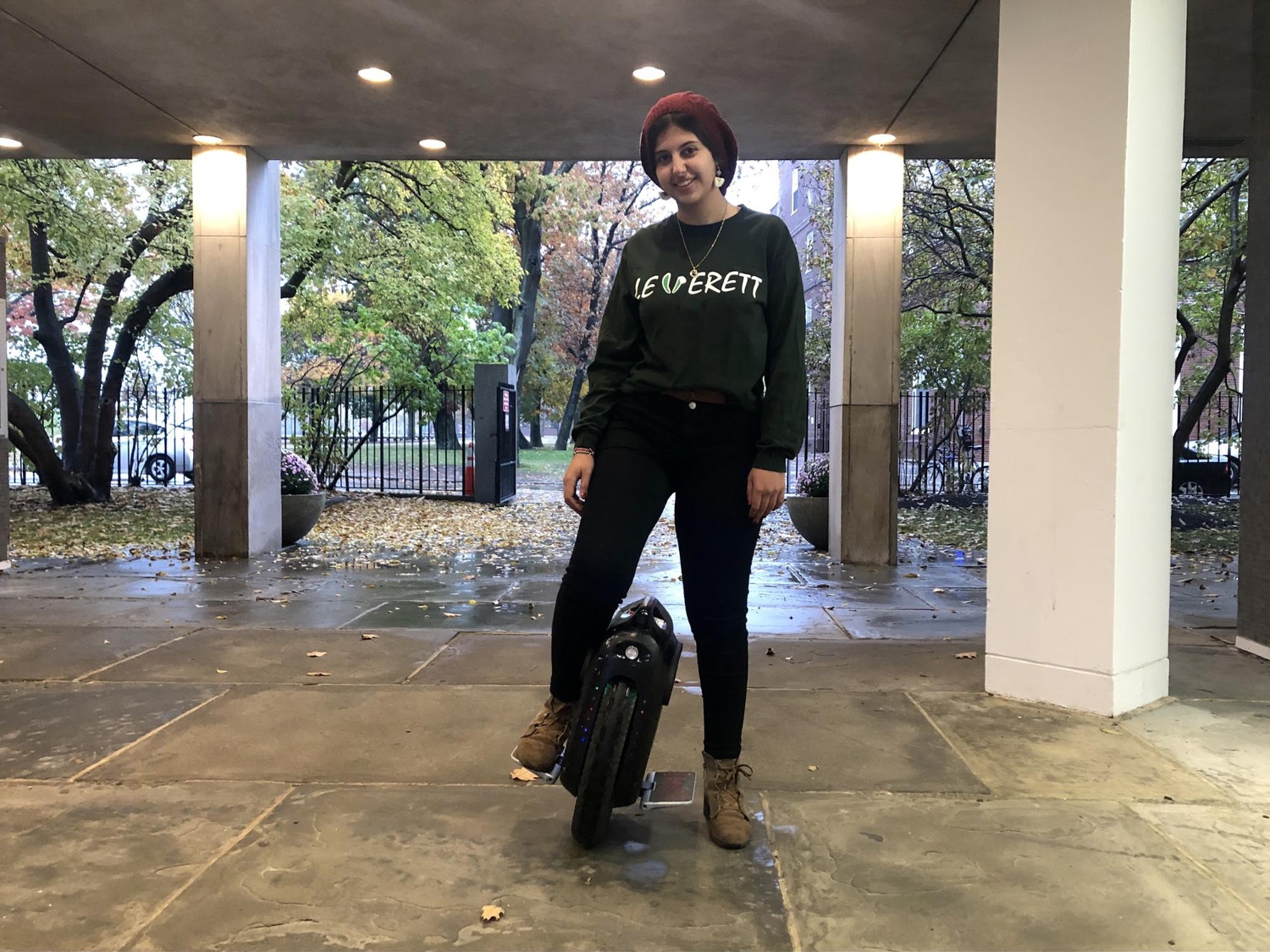 Some of us bike or scooter around campus. Others walk from place to place, usually arriving a few minutes late (i.e. still going by Harvard Time). And others simply flake on commitments when venturing through the cold feels like too much work. There are plenty of campus transportation options, but Marwah W. Sabrah ’21 has arguably the coolest and sleekest one of all. Marwah has been riding an electric skateboard for three years and began using an 18-inch wheel electric unicycle a few weeks ago. We sat down with her to talk about, well, what it was like being so cool.

How did you get started with all of this?

I always wanted to ride a skateboard, and I wasn't really able to do it, because I'm really clumsy. But I had time over the summer at some point to just invest and practice. And I had already bought, like, the electric one, so it would be bad if I didn't learn how to use it. After that, though, I found it to be extremely enjoyable just riding around. Especially like around lakes, rivers, natural environments. It's very refreshing; it's very meditative.

Was learning how to ride the electric skateboard difficult?

It was a learning curve at first because I'm just generally very clumsy, so it took a while for me to get the hang of it. I think like, after a couple of weeks though, I was pretty comfortable and confident. 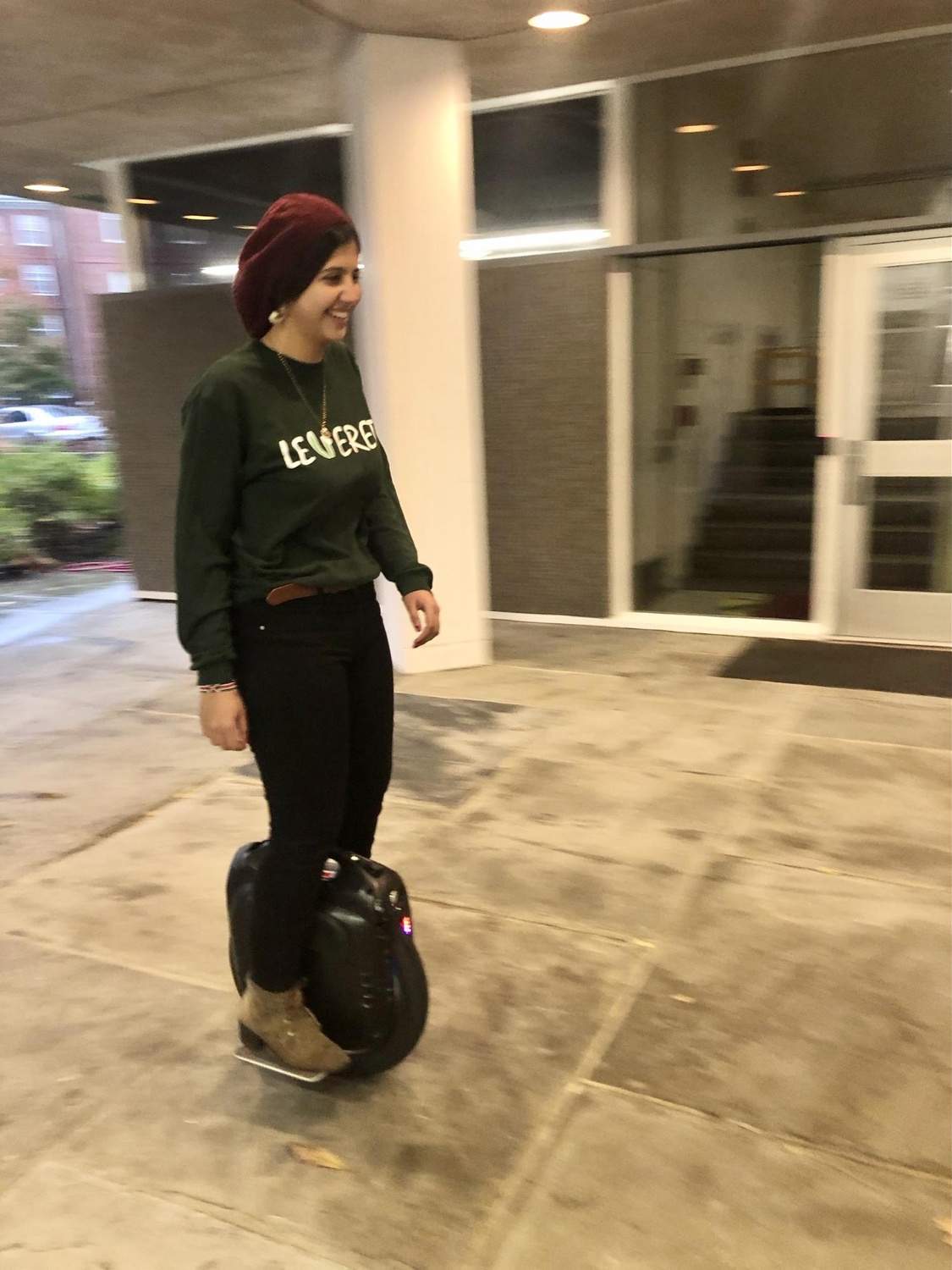 Marwah on the move! By Lucy Liu

What about the unicycle?

So basically, if you want to accelerate, you have to lean your body forward. If you want to decelerate or go backwards, you have to lean back. And to turn, you kind of maneuver it with your feet. So that was a really hard portion to also learn, because at some point I was able to go in like, straight stretches, but turning essentially made me fall over to the side.

How fast does the unicycle go?

How fast do you go, then?

I would say I go like 35 to 40 miles per hour, depending on what the conditions are and, like, the general speed of other cars.

What else can you do on it?

People have videos of them hiking up mountains on the unicycles. You can like, ride it on the beach, you can go off road. They're powerfully, wildly strong.

You got this unicycle pretty recently, but if you had the chance to upgrade again, what would you get?

If I could upgrade and if I could afford it, there are these things that cost like twenty, thirty thousand dollars. It’s like a jetpack, but over water.

Do you have any thoughts on Razor scooters? Would you ever get one?

At this point, no. Size-wise, they're not like, small. They're not like, smaller than what I already have in order to be more convenient in that aspect. Plus, I think at that point I would just walk, given the speed difference of walking versus taking the scooter. But I do respect them.

According to Marwah, the electric unicycles are generally all sold from overseas, so if you want your own, you’ll have to do your own research on which model to get. Plus, you’ll have to learn how to unicycle. Good luck!