Boston and L.A. based artists feature their work in a new student-curated exhibition 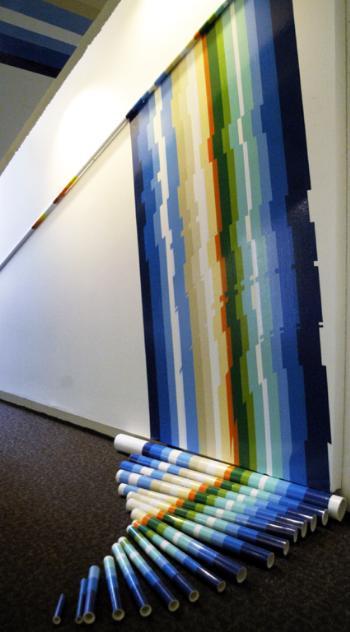 Curated by art history concentrator and Mather resident Sarah R. Lehrer-Graiwer ’05, the exhibit was organized on behalf of the Harvard Advocate, the campus literary and visual arts magazine, for which Lehrer-Graiwer serves as the Art Pegasus.

“[The Art Pegasi] bring artists to come speak and organize exhibitions. [But] I probably would have done this anyway,” she says.

Though six artists were initially tapped to contribute to the show, the number eventually increased to eight—two of whom are based in Los Angeles. The other six are in Boston.

Lehrer-Graiwer insists that there’s no overarching theme to the exhibit. “I’m from L.A., so this is just my hand reaching out for the artists and putting them in the gallery,” she says. “It’s about chains of acquaintanceship, which I like.”

Lehrer-Graiwer says one thing she did hope to achieve was to make Harvard students more aware of the artistic communities in Boston and elsewhere.

“There is some sort of buzz, or thriving scene of production, and I wanted to make that palpable,” she says. “This is how the real world works, and I’m very attached to it.”

Lehrer-Graiwer says she was pleased with the opportunity to try her hand at curating—which she says she hopes to pursue in the future—and with the way the artists’ work comes together.

“Before I knew anything, I knew Dave Eppley had to be in the show,” Lehrer-Graiwer says.

Eppley’s installation, which encompasses the whole of the gallery space, is garnering the most attention, according to Lehrer-Graiwer. In the description that accompanies the installation, Eppley says it is designed especially for the site he is given to work with, and “seeks to draw attention to neglected or over-looked architectural moments.”

In the Three Columns Gallery, this translates to bright strips of industrial colored tape arranged in fluid rainbows over and around the space’s surfaces. Carefully placed pipes serve to both anchor the striations and further contour and distort by geometric displacement.

“Because Dave’s worked specifically with the Three Columns Gallery space, there are a lot of students asking to keep it,” says Amanda Jack, the resident tutor in charge of the gallery space. Although she says that won’t be possible because future shows must go up, the house is considering a more permanent exhibit in another space, such as the grill area.

Jack says there are several important features of the gallery that make it a unique xhibition space on campus, including its central location and visibility. “People coming into dinner just stumble onto it,” she says, contrasting it with the relatively hard to find Adams Artspace.

Interactive aspects of the exhibit also add to its attraction. Situated on one bench are some loose pipes, with the simple suggestion to “Arrange Accordingly.”

“The great thing is, people actually do it,” says Lehrer-Graiwer. The pipes have been arranged from everything from a straight monochromatic row to a carefully balanced abstraction to spelling out the word “art.”

In another corner is “Cenotaph” by Steve Hollinger, which consists of a lever one pushes to activate a flipbook inside a block of concrete. A series of prisms allows the viewer to see the negative silhouette of a man dancing with a spear and what resembles the hat of a Venetian gondolier. Hollinger describes the piece as “art for a post-apocalyptic era.” While the purpose may be hard to grasp, it remains one of the favorite pieces in the exhibit, according to Jack.

Lehrer-Graiwer says she realizes that some aspects of the show may be confusing because of a lack of unity that comes from so many artists working in different media with different aims. “I made no pretense for it to be other than it is,” she says. Although there is no overarrching theme, and she appreciates that, “there are definitely overlapping concerns,” she says.

The space of the gallery is “really formative for the show,” and Lehrer-Graiwer points to issues of particularities of space, figuration of flatness and gradation, dialogues over striation and use of industrially produced monochrome as things over which the various artists are in dialogue.

The one artist that Lehrer-Graiwer feels is “in a world of his own,” is Robbie Kinberg, whose “40 never before available words” are in a small case in the corner. Jack first asked when she saw this late addition to the exhibit, “Is that even part of our show?”

But Lehrer-Graiwer says this is probably her favorite work in the show. “I’m very close to the artist,” she says, “and I love the way the intimate portraits point to the idiosyncrasies, the minute observations so crucial in life.”

The Three Columns Gallery itself is a relatively new venue that has only been used to display artwork since 2000, according to Jack.

“It’s really amazing,” Jack says. “We have this wonderful vertical space and there are really no doors to cut it off. The architect of the House originally wanted this to be a gallery space, and [the house staff] has seen that, and seen it to fruition.”

Jack says she’s very excited with the activity of the space. “You become familiar with the work that’s been up in your house” she says. Although Jack says it is always sad to see it come down (most exhibits last about a month), the amount of interest and the fact that “we just have that many shows,” is a cause for excitement. “It’s alive and it’s here,” she says. “And we have every reason to be thankful for that.”

BostonLA is on display in the Three Columns Gallery until March 30.

–Staff writer Jayme J. Herschkopf can be reached at herschk@fas.harvard.edu