A new set of University-wide Title IX policies and procedures set to take effect this fall will create a central office to investigate cases of sexual assault and gender-based harassment and institute a “preponderance of the evidence” standard for evaluating those allegations.

The new policy, unveiled Wednesday, dramatically changes how cases of sexual assault are handled at Harvard. The new Office of Sexual and Gender Based Dispute Resolution will employ professional investigators and essentially remove investigative responsibility from individual disciplinary boards across schools. Based on the facts provided by the central office, those disciplinary boards will work with University Title IX Officer Mia Karvonides to issue sanctions. 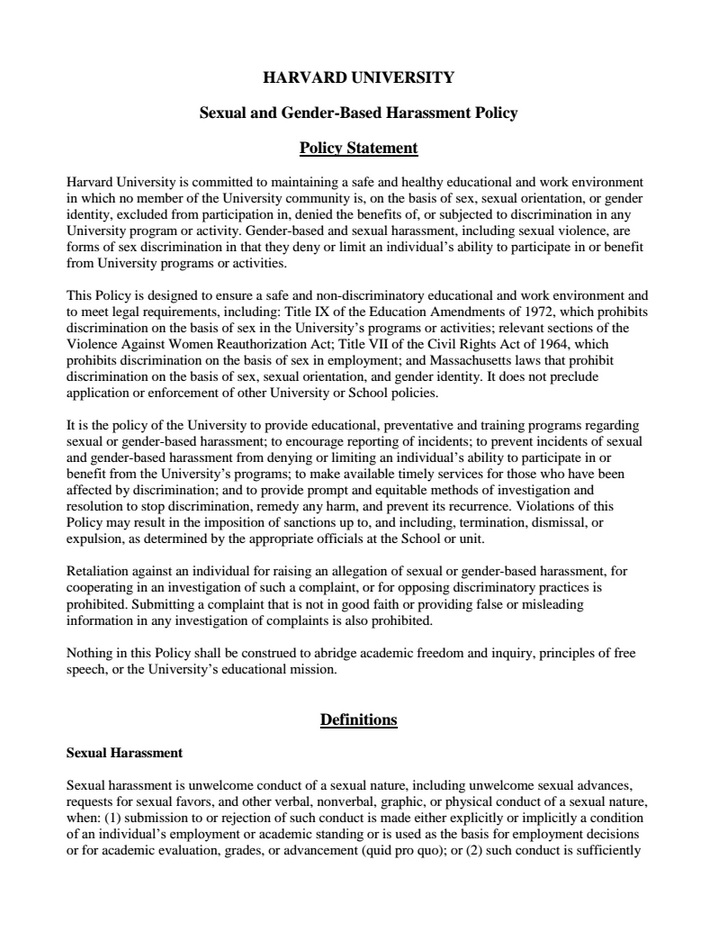 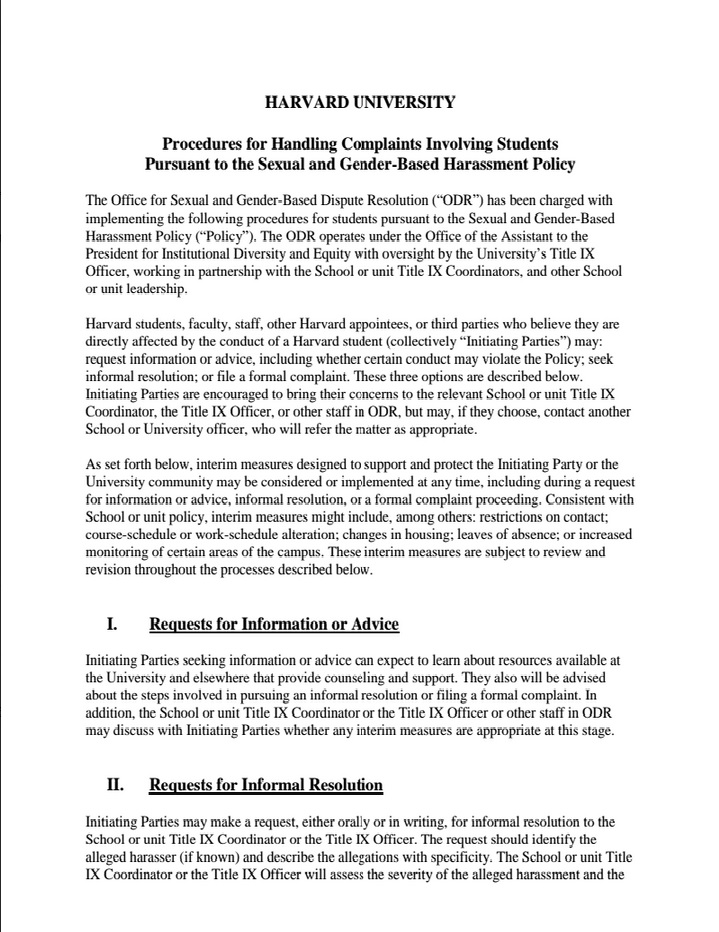 The “preponderance of the evidence” standard that the office will employ is seen by many as a lower burden of proof than the “sufficiently persuaded” standard currently used by the College’s Administrative Board. The preponderance of the evidence standard, favored by the U.S. Department of Education’s Office for Civil Rights, is generally understood to require more than 50 percent certainty to determine guilt.

Absent from the new policy is an affirmative consent requirement, under which partners must affirmatively communicate their willingness to participate in sexual activity. Activists on Harvard’s campus, such as those involved with the group Our Harvard Can Do Better, and across the country have lobbied for such a clause.

Instead, Harvard’s new policy—which also applies to faculty and staff—uses a standard of “unwelcome conduct of a sexual nature” to define sexual harassment,  a term which encompasses sexual assault and a number of other actions. According to the policy, a number of actions, including conduct that “interferes with or limits a person’s ability to participate in or benefit from [University programs]” fall under “unwelcome sexual conduct.”

In a statement, University Title IX Officer Mia Karvonides said that there is no “standard definition” of affirmative consent.

Wednesday’s announcement comes amid federal review of Harvard’s handling of sexual assault cases. In March, two undergraduates—at least one who is a member of Our Harvard Can Do Better—filed a complaint with OCR alleging that the College’s sexual assault policies violate Title IX. OCR has since opened an investigation into those policies and procedures, as it has with dozens of other colleges and universities across the United States.

Harvard Law School’s policies are also under federal investigation, prompted by a complaint filed with OCR in 2010.

Under the procedures announced Wednesday, involved parties may respond in writing to the report filed by the investigative office and may appeal if procedural errors occur or new evidence surfaces. While there is no timeframe for original complaints to be filed, appeals must be delivered within a week of the release of the final investigative report.

Parties to the case may also request an “informal resolution” decided by an official from the investigative office, which would presumably eschew the more formal disciplinary measures that are traditionally applied. Any “informal resolution” must be granted before the investigation is concluded and a final report is delivered and approved by the complainant, the respondent, and Karvonides in consultation with the relevant school.

The new procedures also allow for complainants to request anonymity, though the policy draft says that such a request “may mean an investigation cannot go forward” or might result in an alternative resolution to the claim.

Karvonides said in a press release that the new central investigative office “will create a new level of continuity and consistency” in the way the University handles allegations of sexual assault. She also said that though central investigators are at the center of the new policy, individual schools will be involved in cases involving their students.

University President Drew G. Faust, who made the development of new sexual assault support and response procedures a priority this spring, hailed the new policy on Wednesday.

“This new, progressive policy–alongside the new, centralized procedures for investigating reports–will significantly enhance Harvard’s ability to address these incidents when they occur,” Faust said in a statement.

While the new policies will take effect this fall, Karvonides confirmed that it has not yet been approved by OCR. She added, though, that University leadership felt that waiting much longer to announce might make implementing the policy difficult in time for the fall term.