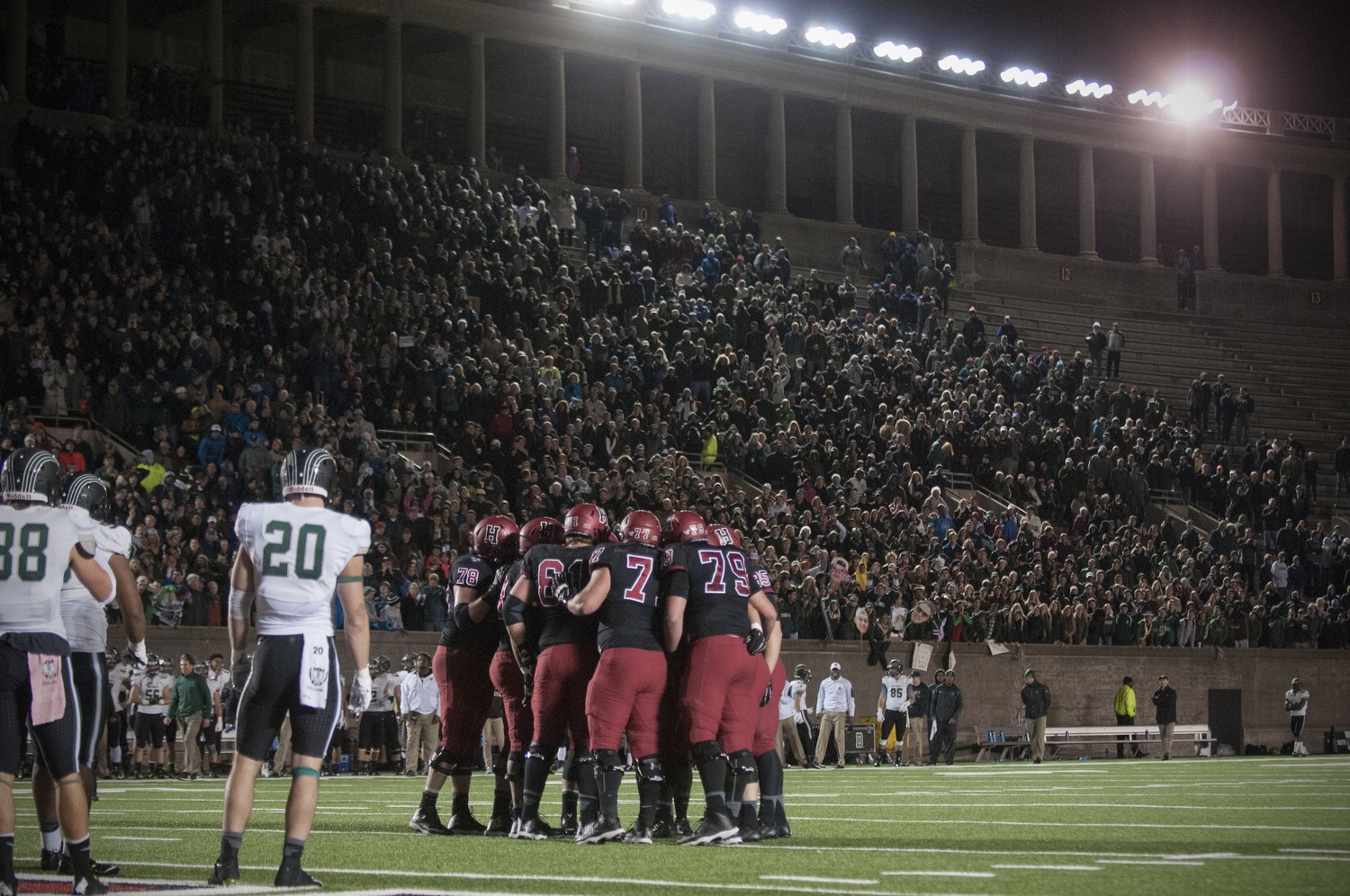 Leading 13-0 early in the fourth quarter, Dartmouth looked to be on its way to a win after stopping Harvard five consecutive times on the one-yard line. By Mark Kelsey
By David Steinbach, Crimson Staff Writer

With three minutes remaining in the fourth quarter Friday night, the devastation began to set in for the Harvard football team.

Dartmouth had thus far maintained the upper hand throughout the heavyweight clash between the two undefeated squads in Cambridge, and the visitors possessed the ball with a 13-7 lead.

What looked like such a promising Harvard season was rapidly sliding away.

But then the improbable happened. As Dartmouth running back Ryder Stone received the pitch from quarterback Dalyn Williams on the option, senior linebacker Jacob Lindsey swept around the edge and leveled the ball carrier. The pigskin popped free. 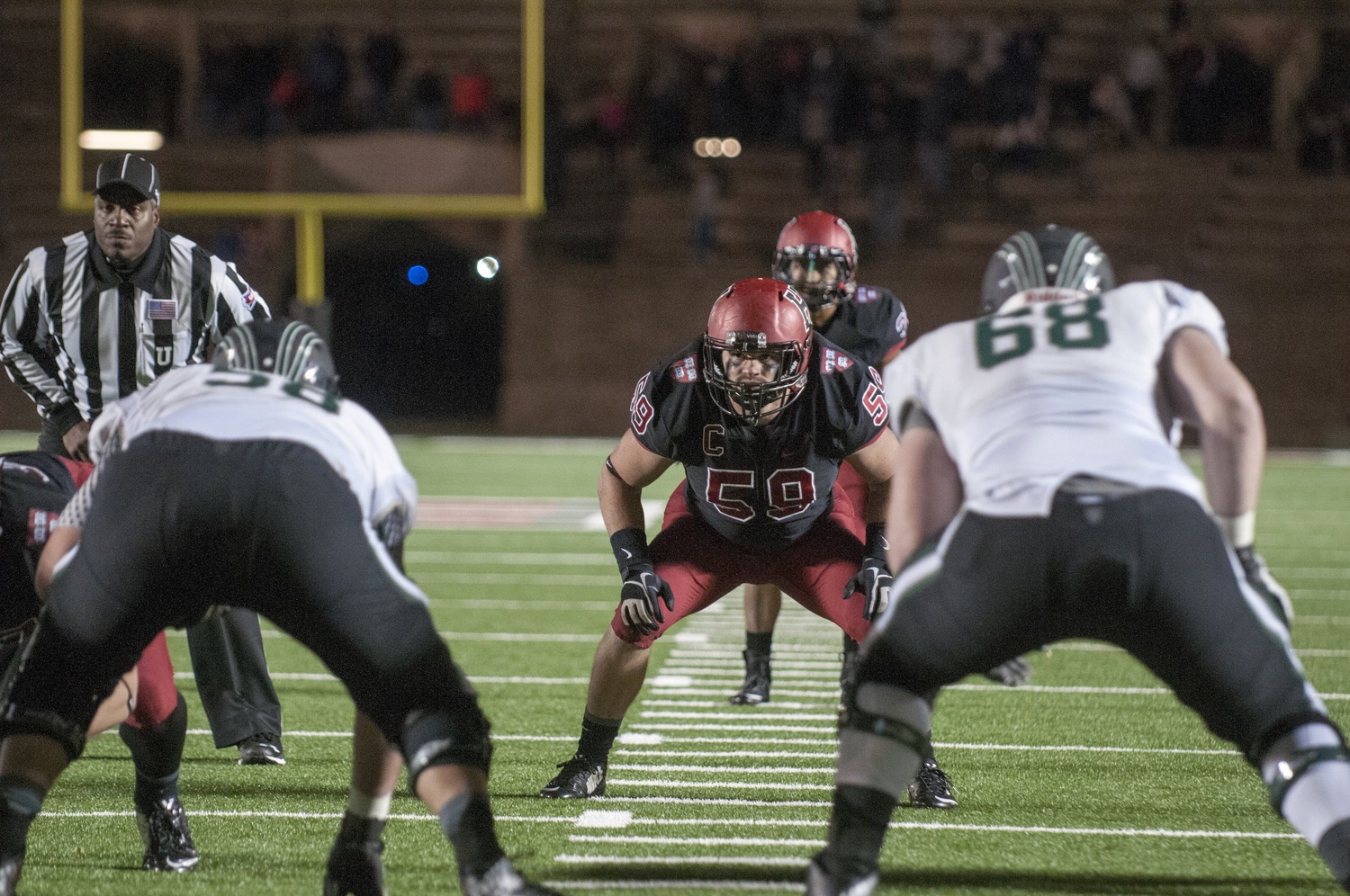 Captain Matt Koran's fumble recovery with under 3:00 remaining enabled the Crimson to take its first lead of the game in the final minute. By Mark Kelsey

“I just hit him as hard as I could,” Lindsey said. “I didn’t intentionally try to punch for it, but it was very fortunate to get it loose.”

Captain Matt Koran dove on the ball, and the Crimson sideline exploded. Suddenly—and shockingly—Harvard had life, thanks to the top-ranked defense in the FCS.

A tall task remained, however, with 2:54 on the clock and the ball on the Dartmouth 49-yard line. The prolific Crimson offense, which eclipsed 40 points in each of its first six games, had scored only once on Friday and struggled to move the ball at times.

A touchdown would save Harvard’s season. Anything less, in all likelihood, would doom it to a second-place finish in the Ivy League.

The Crimson ran 11 plays on the ensuing drive. Perhaps the most critical was an 18-yard strike from senior quarterback Scott Hosch to junior tight end Anthony Firkser to move the ball into the red zone. 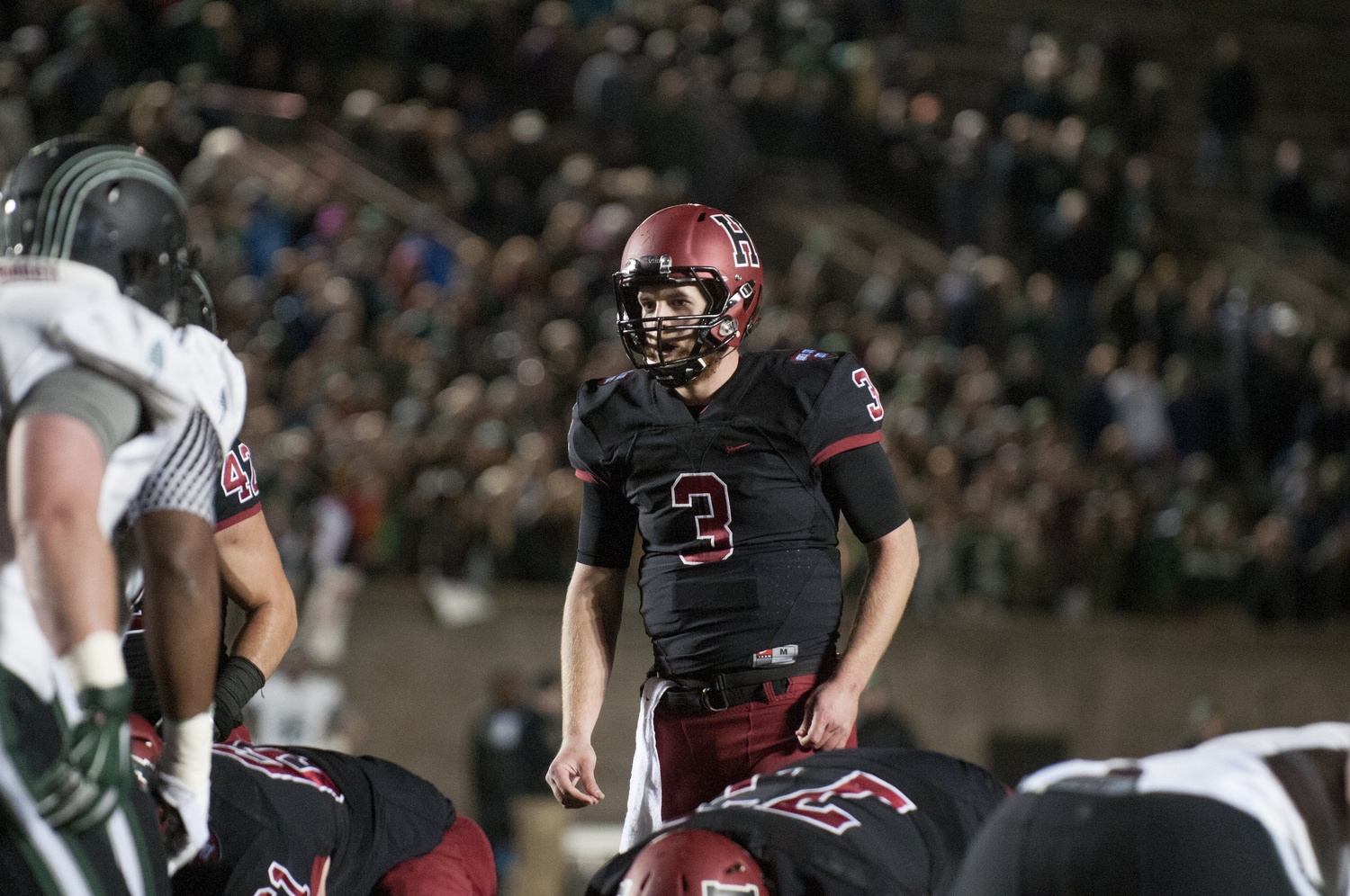 Over the final 10 minutes of play, senior quarterback Scott Hosch went 8-15, throwing for 94 yards and two touchdowns. By Mark Kelsey

But the decisive moment came three plays later. As Hosch scrambled outside the pocket with just over 40 seconds remaining, freshman receiver Justice Shelton-Mosley found a bubble in the front of the end zone. Hosch hit the youngest member of the offense in the chest for a five-yard touchdown.

The extra point gave Harvard a 14-13 lead, its first of the evening. When sophomore defensive lineman Stone Hart deflected a potential game-winning, 46-yard Big Green field goal attempt with one second remaining, all the tension and emotion poured out for the Crimson. The team had truly snatched the unlikeliest of victories from the jaws of defeat.

“If we lost that game, our season was pretty much over—we knew that,” Koran said. “We gave it everything we had; we put our hearts on the line. We were blessed with a miracle tonight.”

A STAND FOR THE AGES

Rewind the clock to just over 11 minutes remaining in the contest. Harvard found itself in desperation mode.

Down 13 points—having been shut out in the opening three quarters for the first time since 2010—the Crimson (7-0, 4-0 Ivy) needed to score, and needed it badly.

A strong kickoff return from senior Andrew Fischer, followed by a series of short runs and passes, gave the Crimson first-and-goal at the Big Green one-yard line. If Harvard was ever going to get on the board, it was now.

What followed was a defensive stand of epic proportions. Over the next five plays, three different individuals—Hosch, senior running back Paul Stanton, and senior wide receiver Seitu Smith—all found themselves stuffed at the line for no gain.

On the last of these attempts, Dartmouth defenders gang-tackled Hosch to force the unlikeliest of turnovers-on-downs. It was truly good, old-fashioned football: one of the best offensive lines in Murphy’s 22 years with the Crimson pitted against one of the top defensive fronts in the FCS.

“I will never forget [that defensive stand],” Dartmouth coach Buddy Teevens said. “The passion, the emotion on the sideline, seeing the look in the eyes of the guys on the field, the excitement in the stands behind us…. We’ll talk about that forever.”

Harvard’s ensuing drive looked doomed to fail yet again when the offense faced a fourth-and-12 at the Dartmouth 39-yard line. The outlook remained bleak as Hosch lofted a pass down the left sideline to Smith with a defender latched onto him.

But the senior somehow made a play, using body positioning to create space and catch the ball on his hip. When Smith fell on the pylon clutching the football, the Crimson had turned a near-certain turnover-on-downs into a one-possession game.

“[Smith] just made an incredible catch over the guy,” Hosch said. “To stay in bounds and also to get in the end zone, just incredible.”

A COMEDY OF ERRORS

There’s often a scapegoat in last-second losses, but the temptation to pin the game on the late Ryder Stone fumble must be resisted. That miscue leading to the Crimson’s game-winning touchdown was only the latest in a series of blunders that cost Dartmouth points.

For instance, the Big Green ran a double-pass play late in the third quarter that seemed perfect until receiver Victor Williams dropped what should have been an easy touchdown catch.

Another missed opportunity came one quarter earlier, when a false start penalty at the Harvard one-yard line followed by a missed 22-yard field goal attempt resulted in no points.

Facing the strongest defense of the season, though, the Crimson made ample mistakes of its own on offense, including three turnovers in Big Green territory. Perhaps the most costly came with less than 20 seconds remaining in the first half, when linebacker Will McNamara picked off Hosch at the Dartmouth five-yard line. McNamara finished with a game-high 14 tackles and two interceptions.

Indeed, Harvard was lucky to find itself in a two-possession game with nine minutes to go. It took a truly memorable sequence for the Crimson to keep its quest for a third consecutive Ivy League title alive against an equal opponent.

“I’m so proud of our kids,” Murphy said. “But even our kids, as joyous as we were, I think they genuinely feel for the Dartmouth kids because they played a great football game. They didn’t deserve to lose.”