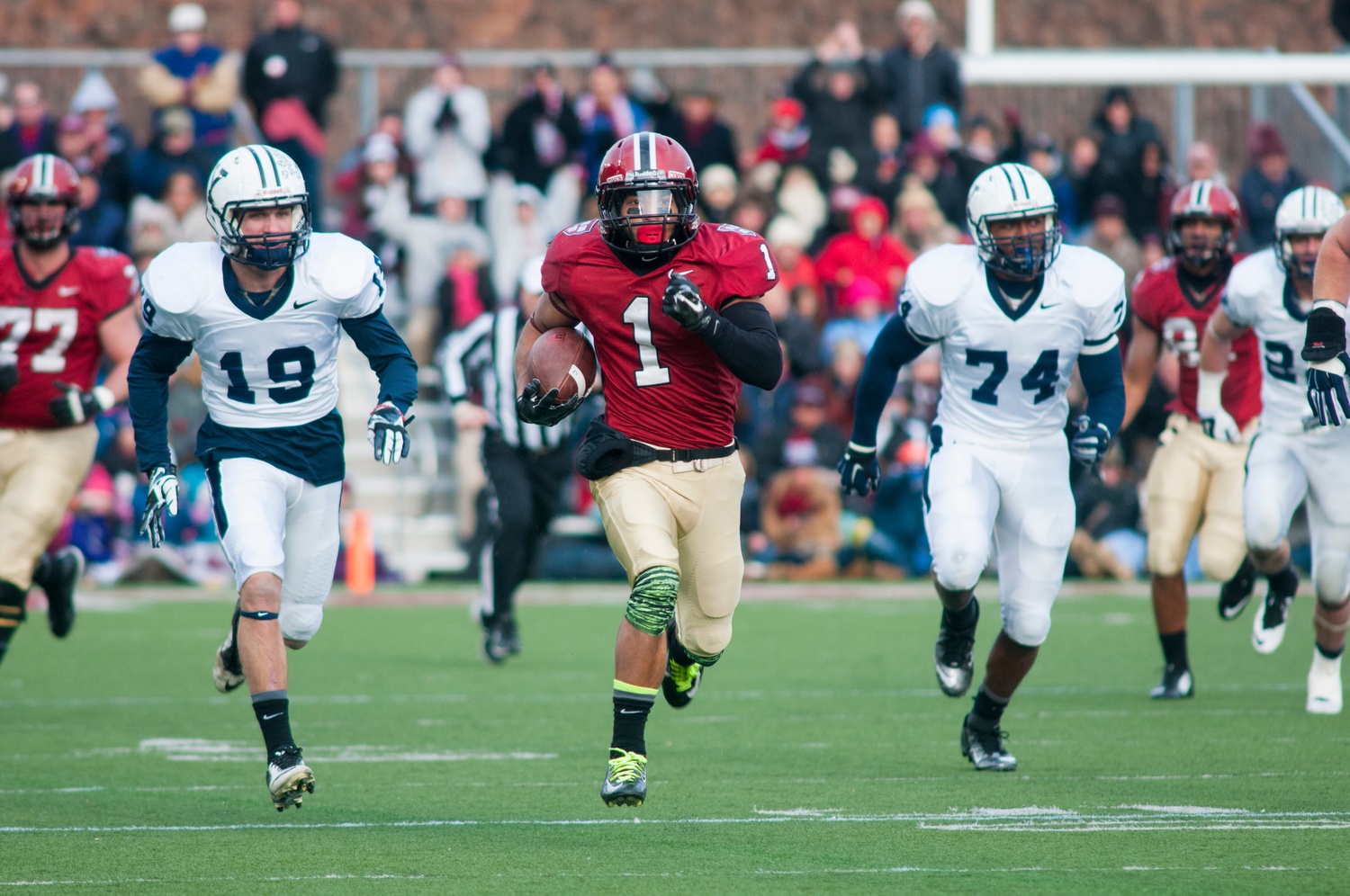 Senior receiver Andrew Fischer, pictured above in the Crimson’s victory in 2014 over Yale, recorded the game-winning touchdown to top the Elis, 31-24. By Robert F Worley
By David Steinbach, Crimson Staff Writer

­Last Saturday, Harvard football fans experienced an unfamiliar sight. As the clock expired and postgame handshakes concluded, Penn players lingered on the field for much longer than visitors to Harvard Stadium typically do.

It had been over two years since the Crimson last found itself on the short side of the scoreboard. The 35-25 defeat at the hands of the Quakers on Senior Day snapped a 22-game Harvard winning streak.

But the Crimson can ill afford to dwell excessively on the past. For this Saturday represents the annual rendition of the biggest spectacle on the team’s schedule: The Game.

“You can approach the situation in two ways,” senior wide receiver Andrew Fischer said. “You’ll have a team that gets the big loss after a big win streak and kind of gets deflated. Or you can have the team that gets angry. I think that’s the sense that this team took and these players took.”

Harvard (8-1, 5-1 Ivy) will need to regroup quickly, because the stakes are high. A win over Yale (6-3, 3-3) in New Haven will clinch for the Crimson a share of its third straight Ivy League title. If Dartmouth and Penn take care of business in their respective games, the championship will be split three ways.

To be sure, the hype is not what it was last year. There’s no College GameDay in town, no undefeated record at stake, and no championship duel with the Bulldogs at hand.

But The Game is The Game, and Saturday marks its 132nd edition. For players on both sidelines, it does not get any better than ending the season with a victory over their archrival.

“[Yale] is going to be really hungry, really motivated, and we’re going to have to be equally or more hungry and more motivated,” Crimson coach Tim Murphy said. “So much of this game is a game of emotion, and I know our kids will be ready to play.”

Harvard has topped Yale eight times in a row, though that streak nearly came to an end last year as the squads found themselves tied late in the fourth quarter. This year, the Bulldogs will need to play their best football to beat a senior-heavy Crimson squad.

The graduation of three All-Ivy first teamers—running back Tyler Varga, along with wide receivers Deon Randall and Grant Wallace—means the prolific Yale offense of last year is gone. In week four, the Blue and White lost to Dartmouth by 32 points, and the team later gave Columbia its first Ivy victory since 2012.

Luckily for coach Tony Reno, though, his Yale squad may be getting hot at the right time. After moving junior defensive back Dale Harris to the running back position on account of the team’s injuries and offensive struggles, the Bulldogs have registered two wins in as many weeks. A spark in the ground game, highlighted by 177 rushing yards from Harris last week against Princeton, helped Yale post its two highest point totals of the season—41 and 35.

“They’re a really good team that is all of a sudden playing with a lot of confidence, a lot of enthusiasm,” Murphy said. “They seem to have found themselves.”

A more balanced offense removes some pressure from the shoulders of senior quarterback Morgan Roberts, who has struggled at times this season. A 2014 All-Ivy second teamer, Roberts has tossed just three touchdowns to go along with nine interceptions in his last seven games.

While Yale ranks close to the Ivy League average in most defensive categories, it brings to the table a pair of talented defensive backs in captain Cole Champion and sophomore Hayden Carlson. The latter is tied for first in the Ancient Eight with 81 tackles, and their combination presents a test for Crimson senior quarterback Scott Hosch and his receivers.

“We take that as a challenge,” Fischer said. “We like to play against DBs. We like to go out there and play against the best and show what we can do.”

After outscoring opponents by an average of 36 points over the season’s first six games, the Crimson has recently experienced much tighter contests against stronger foes. Harvard followed up a one-point victory over Dartmouth with a tighter-than-expected win at Columbia, before falling for the first time in 22 games to Penn.

Much of the credit for the Crimson’s success this season goes necessarily to Hosch, who has provided a steady hand at the quarterback position while offensive linemen, running backs, and wide receivers have gone down to injury.

Senior tight end Ben Braunecker leads the receiving corps with 85 yards per game and six touchdowns, while freshman wide receiver Justice Shelton-Mosley has emerged as a rising star and a capable punt returner. The duo represents a key reason why Hosch is 149 yards shy of breaking the school’s single-season passing record.

On the other side of the ball, the Crimson defense has struggled of late compared to its early-season dominance. But led by captain Matt Koran at linebacker, the unit still ranks as the third-best scoring defense in the FCS and could pose problems for Roberts and the Bulldogs.

“We definitely played a lot tougher teams the past couple times,” senior defensive back Jordan Becerra said. “We haven’t been playing to our full potential, and I know we can. Hopefully we put it all together this week.”

Earlier this week, Koran held a players-only meeting to get his squad refocused on the task at hand—beating Yale. Saturday presents an opportunity for the team’s senior class to leave its mark on the field one final time.

Unlike last season, this year’s Yale squad finds itself on the outside looking in at the title race. But there is nothing the Bulldogs would like more than to deprive Harvard of a co-championship. The Crimson, meanwhile, needs just 60 minutes to bounce back from a loss and reach its ultimate goal for the third straight season.

“We’re still in the run for the Ivy League championship,” senior offensive lineman Cole Toner said. “We don’t take that for granted. We get a mulligan, per se.”