Taking Their Talents to the Next Level 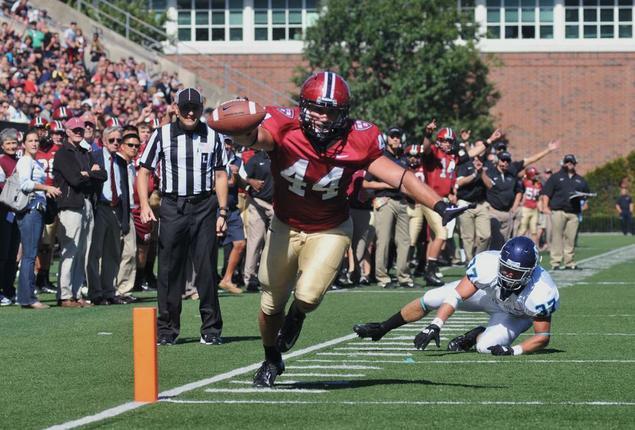 Following graduation, Harvard students disperse into the world on a diverse range of paths. Many pursue full-time employment. Some immediately enroll in graduate school. Others travel abroad. However, a select few follow their dreams of becoming professional athletes.

For these athletes, the road traditionally less traveled means continuing a familiar routine of road trips, rigorous training regimens, and endless competition, all in pursuit of lifelong goals.

Of the four major sports leagues, the National Football League has seen the most Harvard alumni join, with 41 players having made it to the professional league since 1920. Boldface success stories include Ryan Fitzpatrick ’05, the first Harvard graduate to start at quarterback in the NFL, and Matt Birk ’98, a former All-Pro center and Baltimore Ravens Super Bowl champion who currently works as the league’s Director of Football Development. Senior defensive end Zack Hodges made recent headlines for signing with the Indianapolis Colts in May.

Graduating senior offensive lineman Nick Easton, a recent free agent signee with the Ravens, will hope to follow the success of his Harvard predecessors. And he’ll get a chance to do it alongside fullback Kyle Juszczyk ’13, who has appeared in every game for the Ravens since arriving in Baltimore. Juszczyk and Easton were teammates on the 2010 and 2011 Harvard teams that went a combined 16-4 overall and 12-2 in Ivy League play.

For Easton, the love for football started at a young age—from the time he began playing, he dreamt about being able to play in the NFL.

The Lenoir, N.C., native made his Harvard debut on the field during his sophomore year, appearing in four games in 2011. After taking the 2012 season off, things picked up for Easton in his junior campaign. He played in all 10 games and earned spots on both the All-Ivy League first team and the FCS All-New England team.

What began as a dream became a distinct possibility in Easton’s senior season, when he began attracting the attention of professional teams. He started every game for the Crimson, was named to All-America and All-Ivy teams, and was invited to play in the NFL Players Association Collegiate Bowl. In early May, all of his efforts paid off when he signed an undrafted free agent contract with the Ravens.

Fortunately for Easton, he will not be the lone Harvard graduate at training camp.

“I’m really excited to join Kyle,” Easton said. “It’s always nice to have a familiar face when you are going into a new and unfamiliar situation.”

After seeing immediate action in all 10 games as a freshman for the Crimson, Juszczyk was an honorable mention All-Ivy selection as a sophomore. That spring, Juszczyzk realized his NFL dreams could become a reality; the following fall, his performance earned him second-team All-American honors from multiple outlets.

“[Murphy said] that if I just continued to grow and excel in the program, by the time I graduated, playing in the NFL was actually possible,” Juszczyk said. “Just hearing that from him definitely motivated me and made me start to realize this could actually happen.”

Juszczyk finished his college career as a three-time All-Ivy selection, a two-time All-American, and the program’s all-time leader in catches, yards, and touchdowns for a tight end. After playing in the Senior Bowl, Juszczyk was selected by the Ravens in the fourth round of the 2013 NFL Draft. It was the highest a Harvard player had been selected in the draft since Isaiah Kacyvenski ’00 was picked 119th in 2000. 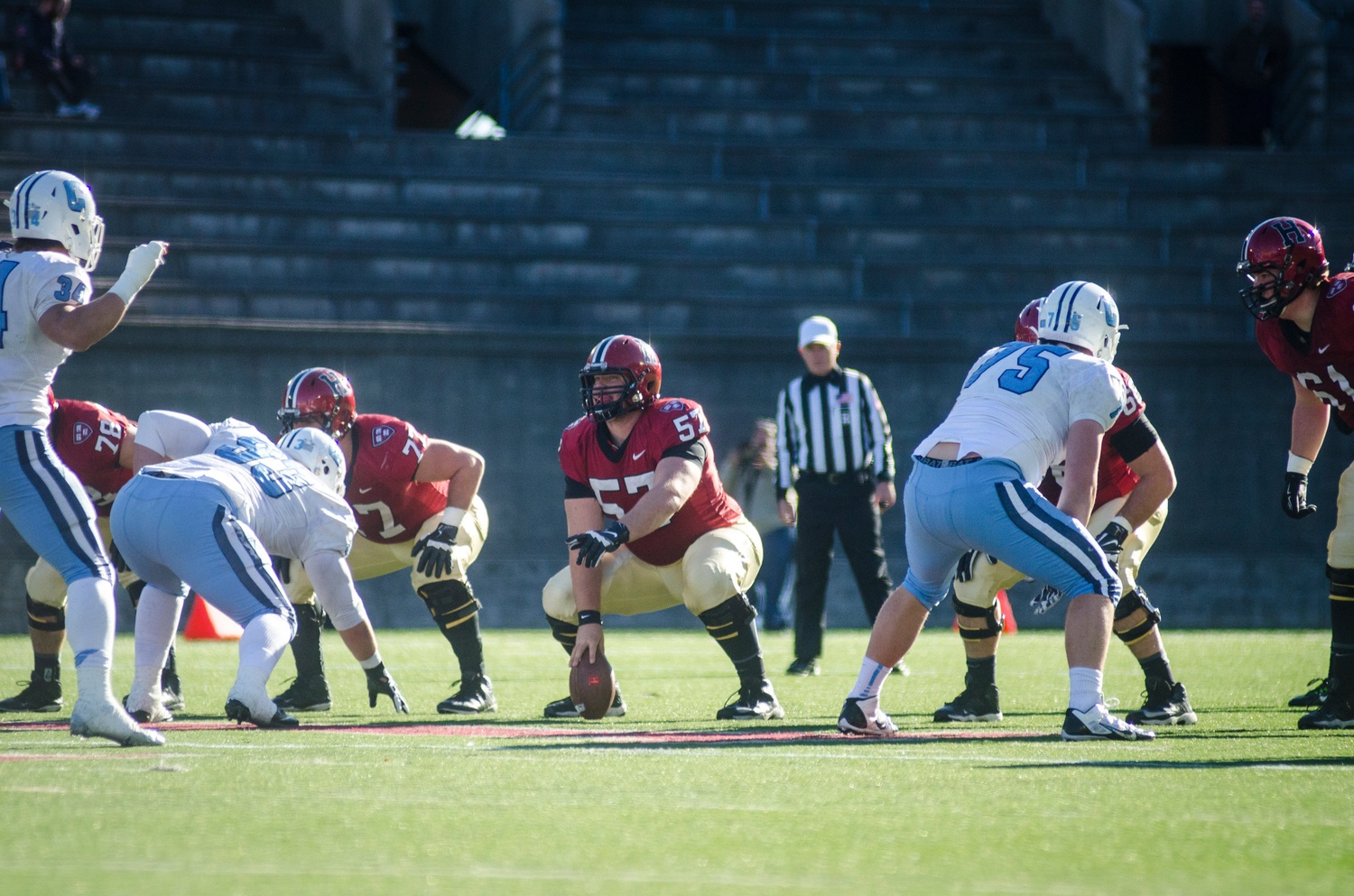 Crimson offensive linemen Nick Easton will be fighting to make an NFL roster after signing to the Baltimore Raven's practice squad. By Sarah P Reid

But despite making a name for himself as one of the primary weapons in the Crimson’s offensive attack, after hearing his name called at the draft, Juszczyk had to adjust to a new position.

“In my whole recruiting process for the NFL, very few teams saw me as a tight end,” Juszczyk said. “Everyone basically assumed that I would be a fullback, based basically on my height. Fullback was the more natural position for me…. Football is football, and if you love it, you’ll adapt.”

Following organized team activities and training camp, Juszczyk made the Ravens roster as a rookie and saw limited action on special teams. At the end of the season, he returned to campus to finish his academic career and get his degree.

“I knew even after having a job in the NFL that it would be important to have that degree because the NFL is a very short career,” Juszczyk said. “I’m going to need my degree one day because football’s not going to last forever.”

After the Ravens released starting running back Ray Rice, Juszczyk received an expanded role in the offense in 2014. He started 14 games, recording 19 catches for 119 yards with one touchdown grab, the first for a Harvard player since 1980. Juszczyk made six more catches over two postseason contests.

“The biggest key from year one to year two is really comfortability—just being comfortable with the system and being in a new city,” Juszczyk said. “I always relate it to college. Freshman year, everything seems like it’s going so fast—you’ve got new classes, you’re in a new city, you get new friends. It’s really the same thing when you get to the NFL.”

KILLORN IT ON THE ICE

Roughly three years ago, Alex Killorn ’12 had just wrapped up his collegiate hockey career, was about to graduate from Harvard, and found himself on the verge of winning a Calder Cup with the American Hockey League’s Norfolk Admirals. Now, Killorn, Harvard degree in tow, skates on a line with Maurice Richard Trophy winner Steven Stamkos, playing a key role on a Tampa Bay Lightning team with Stanley Cup aspirations.

“I’m really happy with the way things have gone,” Killorn said. “I’m pretty blessed, especially playing on a top line in the [National Hockey League], playing with a guy like Steven Stamkos, a guy I remember when I was in college…. I used to watch [him] play on TV, never really thinking that I would play with him.”

Killorn’s road to the NHL was a winding one. After growing up in Beaconsfield, Quebec, Killorn attended high school in Montreal before playing a season in the Quebec Major Junior Hockey League at age 16. The forward attended Deerfield Academy in Western Massachusetts for two years and was drafted by the Lightning in the 2007 NHL Draft after his junior year. But rather than heading straight to the professional ranks, Killorn opted to attend Harvard and made an immediate impact on the program.

“At Harvard, one of the things I learned was really to focus on what you’re doing,” Killorn said. “It’s tough because you have to write a paper, and then you have to go back [to it] after practice. It was tough to juggle all that when you knew in your heart you wanted to be a hockey player.” 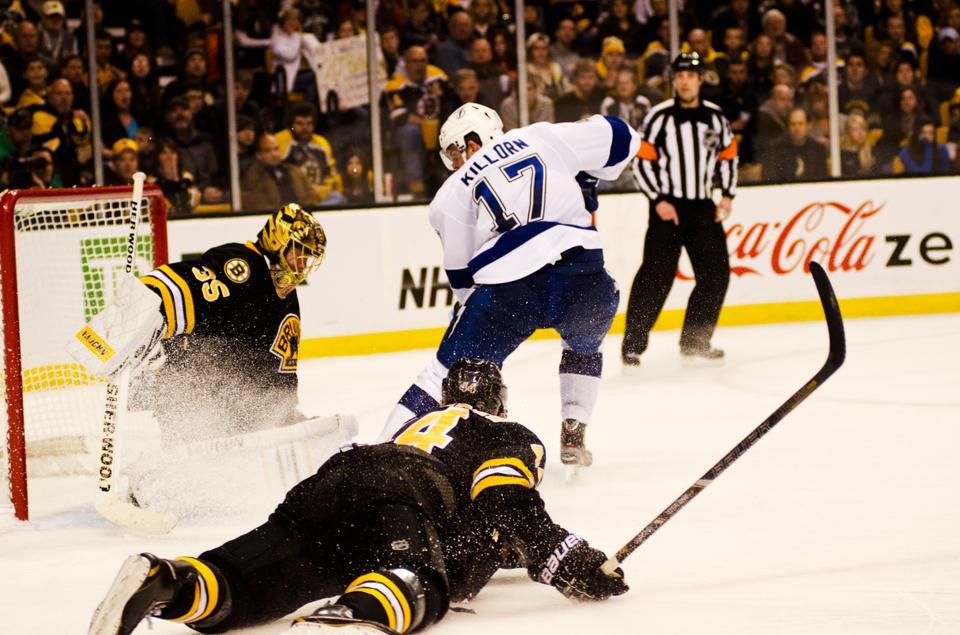 Former Harvard hockey star Alexander Killorn '12 has established himself as an important member of the NHL's Tampa Bay Lightning. By Magdalena Kala

Following his junior season in Cambridge, in which he had 29 points in 34 games, Killorn received a contract offer from the Lightning. But Killorn decided to stay put, eventually leading Harvard to the championship game of the ECAC tournament. Killorn finished his career with over 50 goals and more than 100 points, raising the bar in each of his four seasons.

“One of the reasons I picked Harvard was because I wanted to graduate from there and have that degree,” Killorn said. “I’ve been pretty fortunate that [the] best of both worlds worked out for me. I got my degree and with my development, I think I needed those four years to kind of really become the player I am.”

Killorn split his 2012-2013 campaign between the Lightning and the AHL’s Syracuse Crunch before becoming a fixture on last year’s Lightning team that fell to the Montreal Canadiens in the first round of the Stanley Cup playoffs. Over his two full regular seasons in the NHL, Killorn has registered 32 goals and 47 assists. He has also provided a spark to the Lightning offense this postseason, recording 15 points through the first 17 games of the playoffs.

Brent Suter ’12 remembers sitting in his government class as a senior at Archbishop Moeller High School in Cincinnati, emailing a video of himself pitching to the Harvard baseball coaching staff.

In response, the Crimson sent a scout to one of Suter’s fall tournaments; a few weeks later, Suter was in Cambridge for his official visit—one that ultimately led him to commit to the Crimson later that year.

“I was just really lucky that everything fell into place for that. It was one of [my] goals to get into a good school and being able to play baseball there,” Suter said. “Harvard was just a dream combination of both.”

Six and a half years after sending that fateful e-mail, the 6’5” lefty now now pitches for the Milwaukee Brewers’ Double-A affiliate, the Biloxi Shuckers of the Southern League, after being drafted in the 31st round of the 2012 Major League Baseball Draft.

Suter led the Crimson in wins, strikeouts, and earned run average as a freshman, was named first team All-Ivy as a sophomore, and finished among the top pitchers in the Ivy League and New England during his junior and senior campaigns.

Suter also made waves during his college offseasons, playing in the Great Lakes Summer Collegiate League—where he was named Pitcher of the Year in 2010—and the Cape Cod League. He was also a nominee for the Lowe’s Senior CLASS Award in 2012, which is given to senior athletes who excel on the field, in the classroom, and in the community. 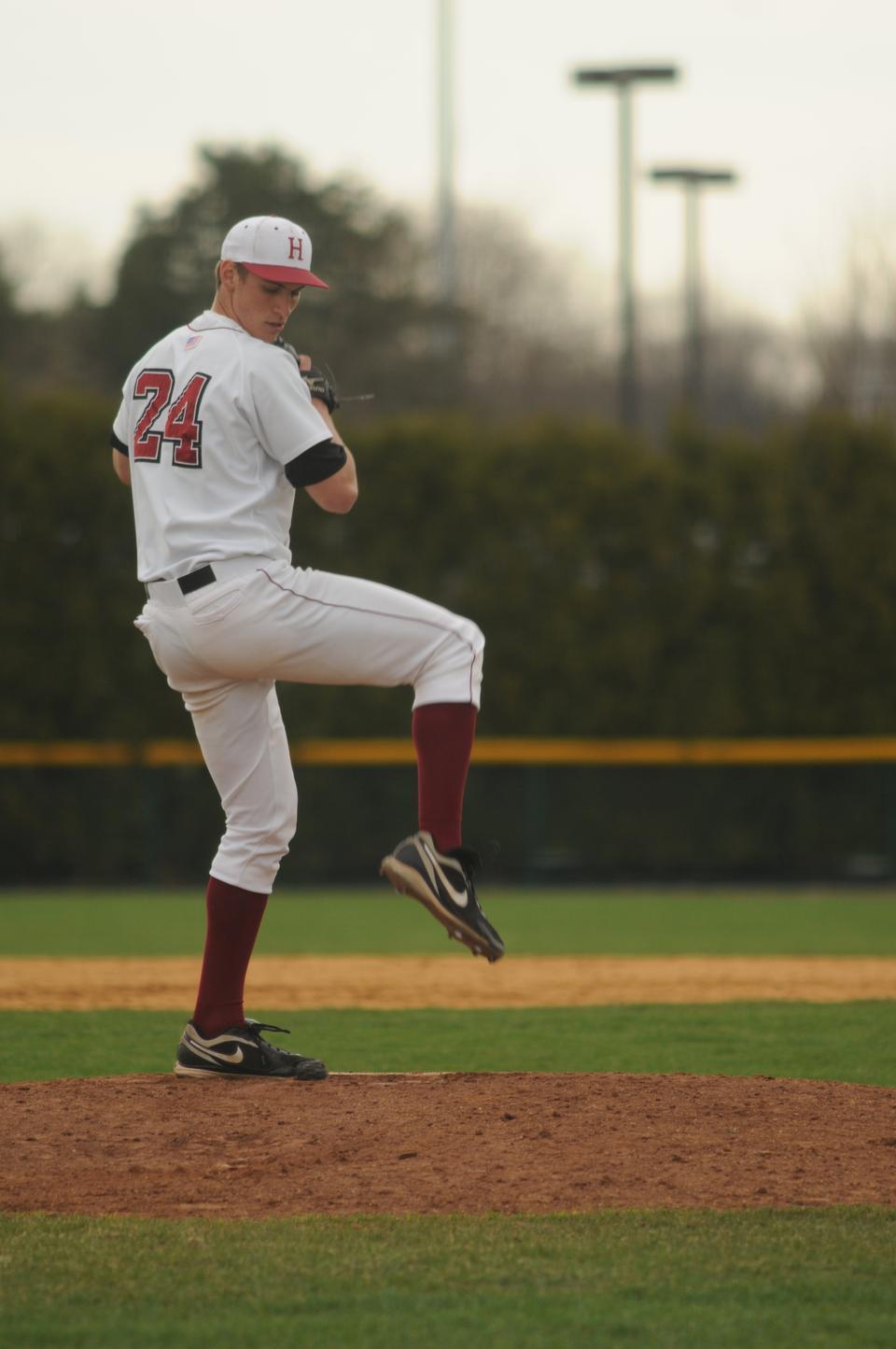 Former Harvard pitcher Brent Suter '12 was selected by the Milwaukee Brewers in the 2012 draft. By Emily C. Wong

“It wasn’t until my sophomore summer where I was pitching pretty well, where some scouts were talking to me and some agents were approaching me where I really felt like this was going to be a possibility,” Suter said. “I had some good workouts in front of teams, and then everything just kind of fell into place with the draft, so I got really lucky to get picked up.”

Following his graduation and the draft, Suter reported to the Brewers’ Rookie League affiliate in Helena, Mont. After 11 appearances, he was promoted to the Wisconsin Timber Rattlers for the remainder of the team’s 2012 campaign, and a year later, he was called up to the Brevard County Manatees of the Florida State League, with whom he went 7-9 with a 3.63 ERA over 21 appearances.

Suter continued to perform well following a promotion to the Double-A Huntsville Stars last season against much stronger hitting opponents. He made 27 starts for the Stars, going 10-10 with a 3.96 ERA. Last April, he threw a one-hit shutout against the Mobile BayBears.

This season, Suter is playing for the Shuckers, which came to exist following the Stars’ move to Biloxi, Miss. In his seven appearances through May 22, Suter is 3-1 with a 2.20 ERA.

“It’s been great,” Suter said. “I love the hot and humid weather down here. The stadiums and hotels we stay in are super nice down here. My teammates have just been awesome…. The Southern League has been great, no complaints at all.”

Suter has already pitched in 72 games and accumulated over 360 innings since graduating from Harvard and continues to take it all in, one game at a time.

“That’s how you get better for this next pitch, this next game, [and] how you get to know your teammates better,” Suter said. “There’s a lot learned from Harvard, [and] I’m really grateful for my time there.”

—Staff writer Stephen J. Gleason can be reached at sgleason@college.harvard.edu.

—Staff writer Katherine H. Scott can be reached at katherinescott@college.harvard.edu.