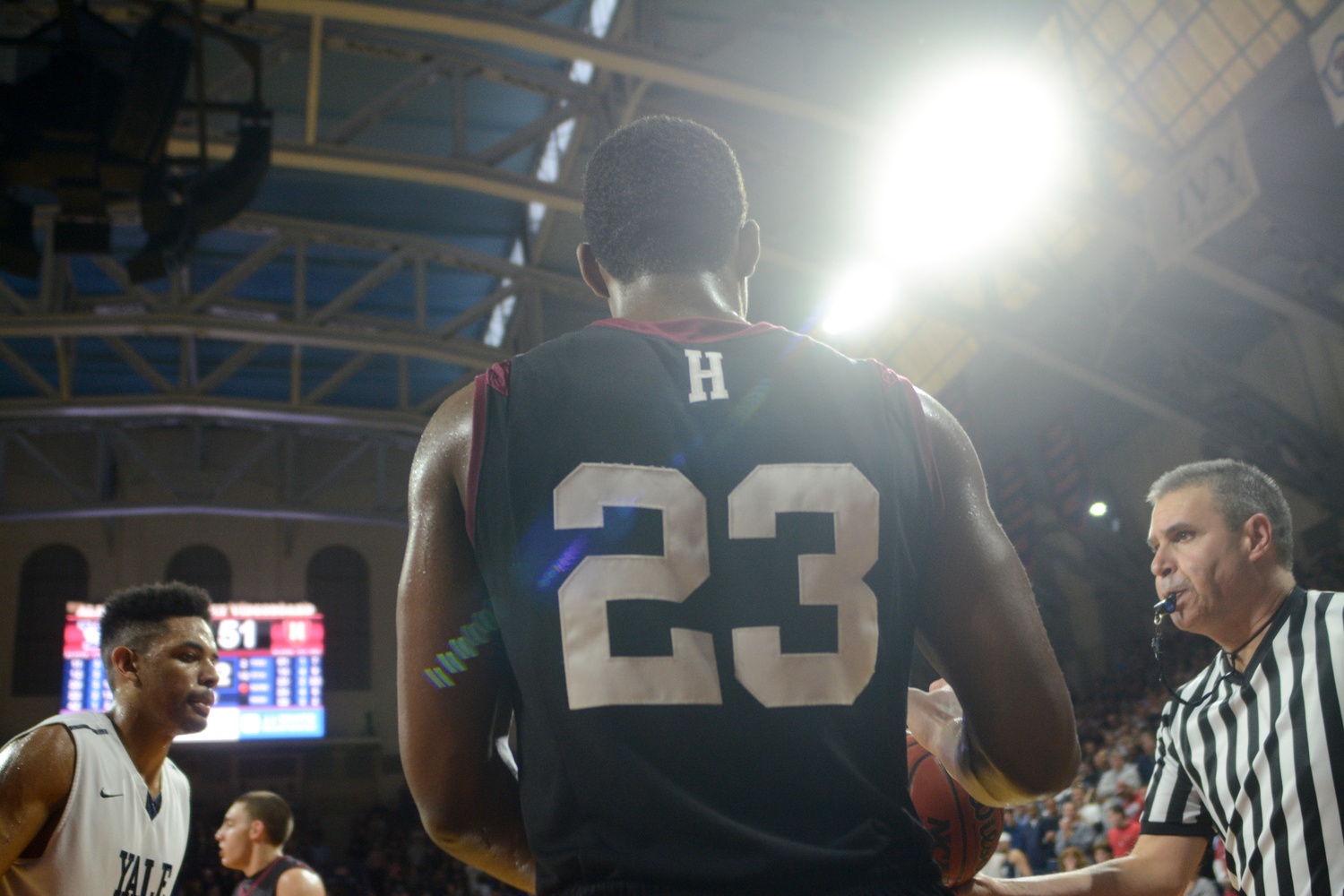 With five seconds to go and his team down two at Brown on Feb. 6, Harvard senior wing Wesley Saunders spun into the lane and hoisted a running floater—but missed the mark. As the ball began to fall, it seemed that the Crimson’s chances at a fifth consecutive Ivy League championship were hopelessly dwindling.

Harvard had already lost two weeks prior at home to Dartmouth on Jan. 24—losing to the Bears would mean trouble for coach Tommy Amaker’s squad. Nonetheless, Saunders grabbed his own rebound and laid the ball back in for the tie, sending the game into overtime and towards an eventual Harvard win.

Saunders dropped a career-high 33 points on that February night to go along with 10 rebounds, three steals, and three assists. While it may have been a career high in points for the senior, Saunders continued to stuff the stat sheet with similar performances throughout his final collegiate campaign.

“Wesley does a lot for us,” said Amaker after a win at Princeton on Jan. 30. “[It’s] not so much the points he scores, it’s the points he’s responsible for.”

This season, Saunders averaged 16.6 points, 6.1 rebounds, 4.3 assists, and 1.8 steals per game and was a unanimous All-Ivy League first team selection.

But Saunders’s dominance this season was not limited to Ivy League play. In what was arguably Harvard’s biggest game of the season, Saunders stupefied North Carolina’s defense in the second round of the NCAA tournament. Despite the Crimson loss, Saunders scored his team’s first 10 points on his way to a 26-point performance that would leave his team two points short of an upset.

“Well, we thought we had a strategy for him, but it didn’t work,” said UNC coach Roy Williams after the game. “[Small forward J.P. Tokoto] really did a pretty doggone good job, but he was really, really hard to guard.”

While many were taken aback by the dominance of a mid-major player like Saunders against a powerhouse like the Tar Heels, those who regularly make the trip to Lavietes Pavilion were less than surprised. This year, Saunders was named a finalist for the Lou Henson award, given to the top mid-major player in Division I basketball and was ranked 46th in

ESPN’s countdown of the top-100 players in college basketball in October.

“We run everything through Wesley,” said Amaker following a win against Dartmouth on Jan. 10. “He is our best perimeter defender, he is our best playmaker, [and] he is Mr. Do-Everything for our team.”

Saunders tends to slowly and methodically break down a defense, yet can show bursts of speed cutting to the basket and flying through the air. Adding to that versatility was the development of the deep ball this season from Saunders. This year, Saunders took over twice as many shots from beyond the arc as he did a year ago, yet managed to shoot 42.5 percent from downtown, up from 29.4 percent his junior season.

Saunders finished his collegiate career ranked fourth in Harvard history for both points (1,511) and steals (175), and his basketball journey is far from over as some consider him to be a fringe NBA draft prospect this year.

Despite criticisms over how Saunders’s game will translate at the professional level, his length on the perimeter and improved shooting from the field could very well land him on an NBA roster next fall. If drafted, Saunders would be the first Ancient Eight player chosen since Penn’s current head coach, Jerome Allen, was selected in 1995.

—Staff writer Theresa C. Hebert can be reached at theresa.hebert@thecrimson.com.

—Staff writer Andrew Farber can be reached at andrewfarber@college.harvard.edu.