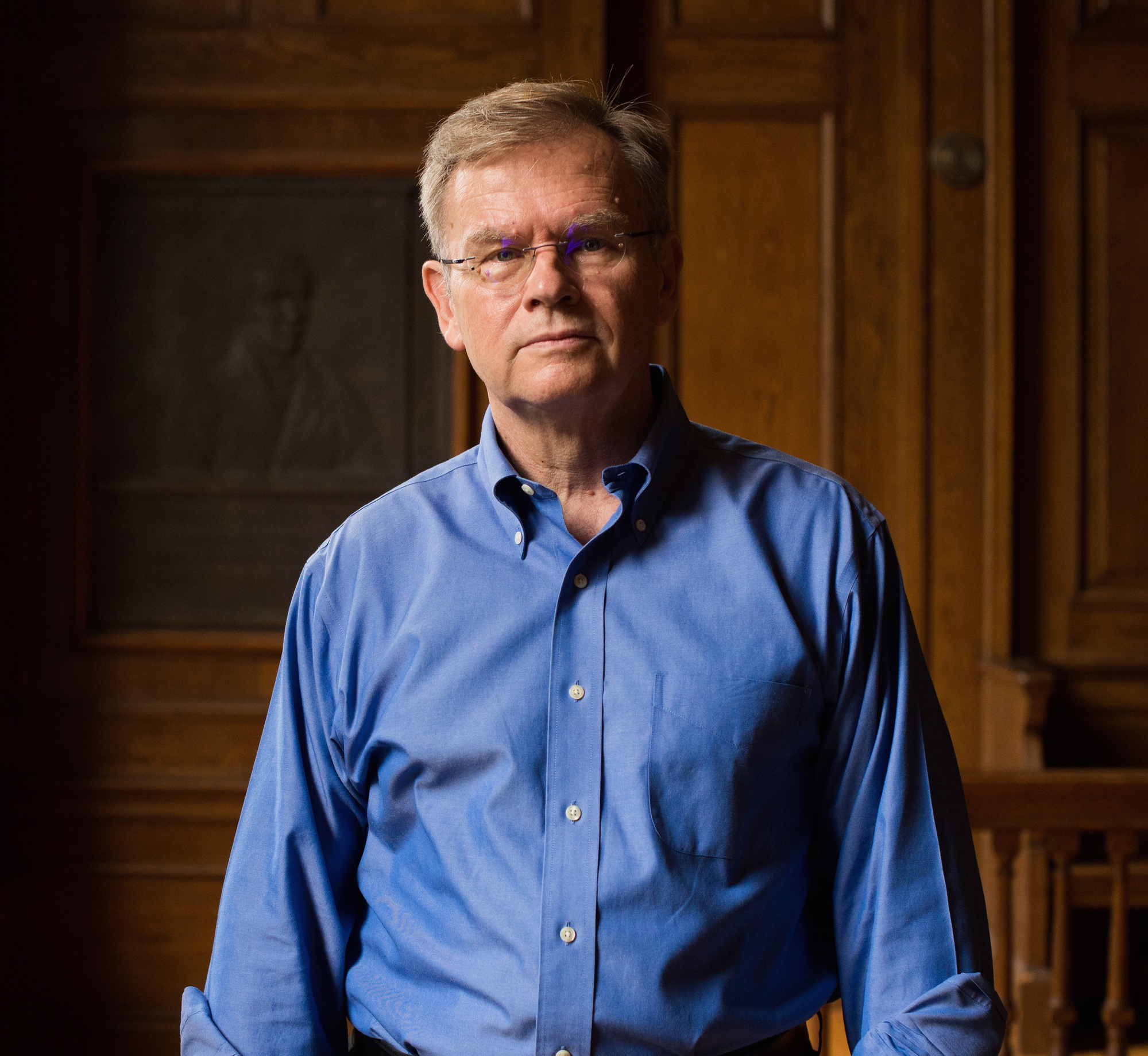 Jordan is a leading expert on Christian sexuality and sexual ethics, and has written on topics from sexual abuse within the Catholic clergy to religious same-sex unions.
By Nathan A. Cummings

The two sides of Mark D. Jordan’s office in the Divinity School tell different stories. The left is comfortably cerebral, lined with neatly organized bookshelves full of books by Thomas Aquinas and Michel Foucault. The right side is a colorful surprise—Day of the Dead skeletons cavort alongside a neon-colored painting of Christ in a field of marigolds.

It couldn’t be a better home for Jordan. As a scholar in both Christian theology and studies of women, gender, and sexuality, he’s forged his career from such contrasts.

Growing up as a child in Ajijic, Mexico, he remembers leaving his parents’ community of expatriate artists to attend Day of the Dead festivities in local villages. Ever since then, he’s been fascinated by the polarity between his traditional Christian upbringing and education and what he describes as a “religion of the body”—an understanding drawn from both these early memories and his own realization of his sexual identity.

In the process, he’s become a leading expert on Christian sexuality and sexual ethics, and has written on topics from sexual abuse within the Catholic clergy to religious same-sex unions. Harvard students, though, likely know him best from his gen-ed course Ethical Reasoning 42: Sexual Ethics as Ethical Reasoning, which boasted more than 120 enrolled students when it debuted in spring 2016.

Jordan isn’t finished refining Sexual Ethics, which he describes as his “dream course.” In fact, he hopes to one day write a book about his experience teaching it. He’s been satisfied, however, by its ability to provide a platform for productive discussion between students. And he’s also been struck by its function as “a sort of microcosm, or mirror, of our problems of talking about sexuality and sexual ethics generally.”

While Jordan is fully aware of the national debate on sexual assault in college campuses—thanks, in part, to his experience as a member of Harvard’s recent Title IX committee—he also cautions against confining the broader topic of sexual ethics to issues of sexual violence.

“What’s really behind Title IX,” he says, “is this larger question of [how] you build a human community in which you reduce, to the bare minimum, sexual violence. In which you get people to treat issues of sexuality and gender respectfully.”

When he isn’t teaching, Jordan is hard at work helping to create such a community. As resident faculty fellow in Pforzheimer House, he and his partner regularly invite students to their home for food and conversation. “These visits originally started out as mainly for queer-identified students in the Quad,” he says. “But now it’s sort of anyone who wants to come.”

And maybe that’s his greatest talent among many—the ability to unite two sides of a room.