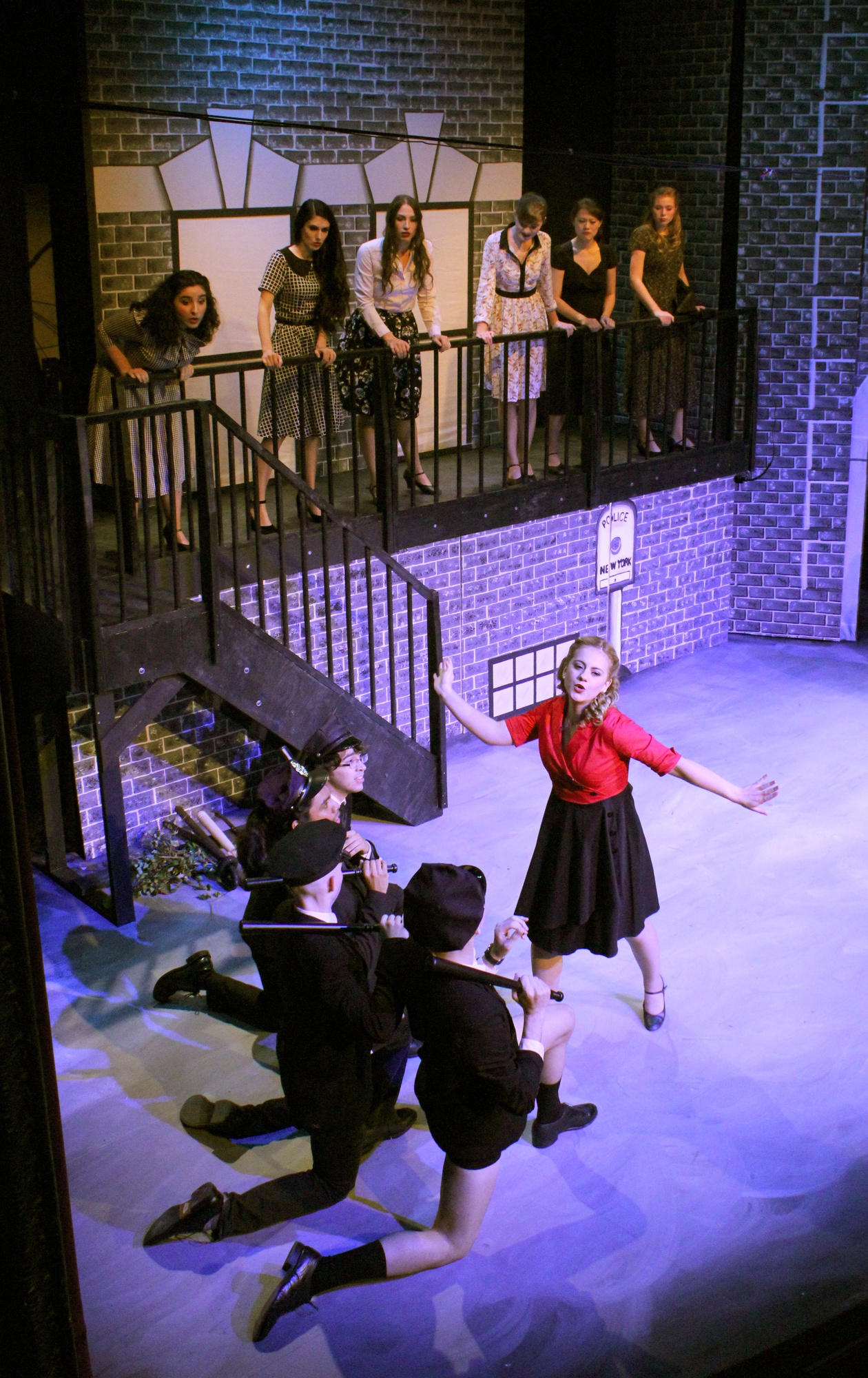 Victorian collaborators W. S. Gilbert (librettist) and Arthur Sullivan (composer) fit many details into their operettas, including their well-known “Pirates of Penzance: Or, The Slave of Duty.” The show features absurd twists and turns, pokes fun at blind British loyalty to the Queen, and crams in a multitude of tongue-twisting musical numbers that often leave singers breathless. There’s much for a cast and crew to explore.

To this already complex premise, however, the Harvard-Radcliffe Gilbert and Sullivan Players’ staging of “Pirates,” which runs Oct. 27 through Nov. 5 in the Agassiz Theater, fast forwarded to the 1940s, keeping Gilbert and Sullivan’s music and lyrics but ditching pirates for mobsters with Brooklyn accents (“the Famiglia Pirata Mafia”). Stage director Patrick Cressler ’20 also added a film noir varnish, using a foreshortened black-and-white set with pops of red in the main characters’ costumes. The over-the-top production asked much of its vocally talented and committed cast, and their performances, coupled with a skilled orchestra, triumphed. The production, at best, provided an evening of ridiculous comedic fun and, at worst, overwhelmed with the sheer pandemonium it presented.

In a nutshell, “Pirates” tells a story of Frederic (Samuel Rosner ’20), who is mistakenly apprenticed to a band of pirates/mobsters by his nurse, Ruth (Anna M. Schuliger ’20). At the end of his apprenticeship, on his 21st birthday, Frederic believes that his duty is to leave the mobsters and their buccaneering behind. He soon falls in love with Mabel (Arianna N. Paz ’19), but ensuing encounters with her father, General Stanley (Aaron A.G. Slipper ’18); the mobsters; and the police make it difficult for the lovers to sail sweetly into the sunset—or, in this case, to settle down in a Brooklyn brownstone.

The cast handled the knotty plot—all the more demanding because of the 1940s spin and requisite mobster accents—with compelling joy and pizzaz. Starting with her expository number, “When Fred’ric was a Little Lad,” Schuliger stole many of the show’s scenes with her bewitching command over the mobsters, her stealthy movements, and her excellent elocution. She didn’t take herself too seriously, making it easy for the audience to connect with her performance and the instructions which she misinterpreted to set the show’s events in motion: “A sad mistake it was to make / And doom him to a vile lot. / I bound him to a pirate—you! / Instead of to a pilot.” Paz’s sparkling soprano and spunky take on Mabel shined in classic catchy songs like “Poor Wand’ring One” and “Stay, Fred’ric, Stay.” Slipper, too, seemed to be cut from G&S cloth and managed the verses of “I am the Very Model of a Modern Major General” with well-articulated finesse and comical calisthenics (which became increasingly strenuous as the song proceeded) in between verses. The ensemble’s vocals bolstered the production. Indeed, the stage often seemed too small for the boundless energy of the cast, not to mention their dance breaks (which were interspersed humorously, albeit unevenly, throughout the production).

“Pirates,” when done right, is a night of good fun. The show was lighthearted and enjoyable, but the disconnect between Gilbert & Sullivan’s Victorian dialogue and this production’s 1940s gloss was often distracting. In sections of Act II, for example, mobsters sometimes dropped their Brooklyn accents without rhyme or reason. And 1940s one-liners—“Never made a cannoli, am I right?” said Richard, a Pirate/Mobster King (Ryan Kapur ’20)—were funny but seemed slapdash, mismatched, and incidental to the story. The cast’s successful comedic timing, impressive vocal range, and dedication to their performances ultimately did not address this disconnect.