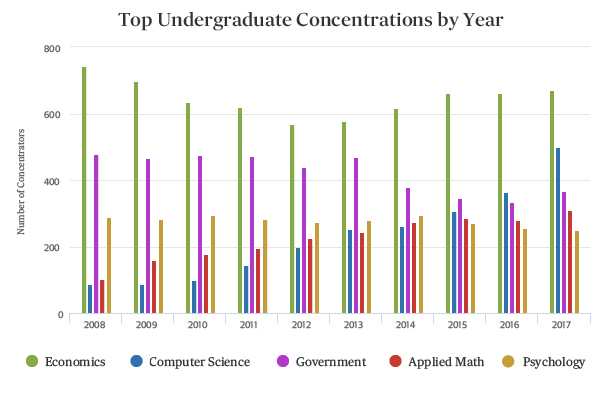 Economics retained its position as the most popular concentration at the College this fall, with 671 undergraduates—a slight increase from last year, according to Dean of Undergraduate Education Jay M. Harris.

Members of the Class of 2020 were required to formally submit their concentrations by Nov. 9.

Government ranked as the third largest concentration with 367 College students in a rebound from its years of shrinkage. The concentration has faced a steady decline in concentrators over much of the past decade.

Applied Mathematics, the fourth most popular concentration, continued its growth as well, drawing 310 students compared to its 279 concentrators in 2016.

Rounding out the top five concentrations is Psychology with 250 concentrators, a small decrease from 255 in 2016.

Although the deadline to declare a concentration already passed, Harris said that there may have been sophomores who failed to submit a petition in order to join a concentration.