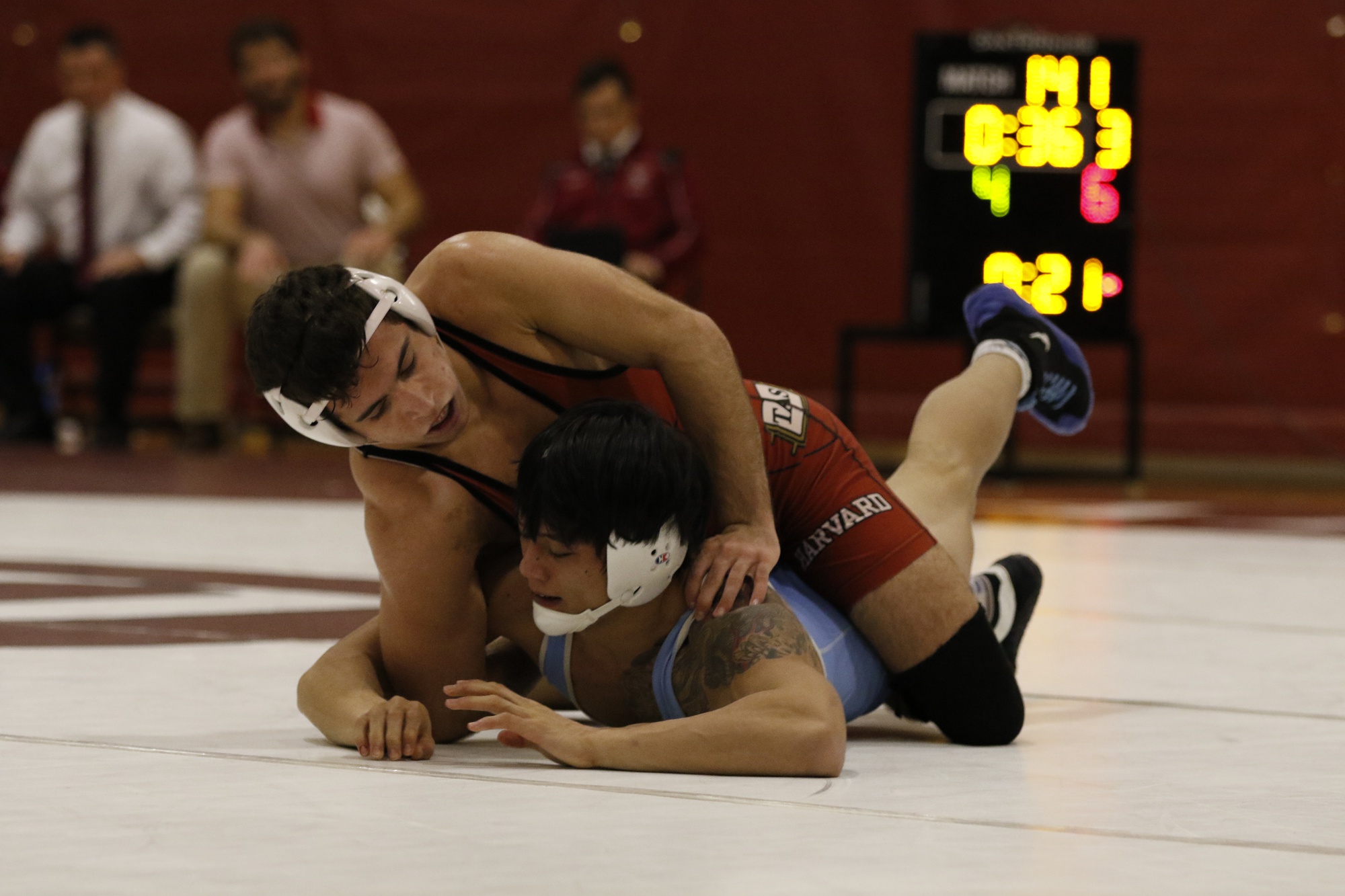 Both wrestling dual meets this weekend were decided by one point, and the grapplers from Cambridge emerged from the fray with two victories. Besting two formidable opponents, the Crimson established a perfect start to its new year and to its dual season overall.

After a start to a season defined by competition in invitationals, the Harvard wrestling team (2-0) beat both Stanford (3-3, 1-0 Pac-12) and Maryland (3-8, 0-6 B1G) in tight contests that displayed the team’s mental and physical endurance, especially in later periods of matches.

“Obviously Stanford is a big one for us, being another big-time academic institution with wrestling,” senior captain Kanon Dean said. “That means a lot to us, going out there and getting after it with them. With Maryland, you have a Big Ten team; Big Ten is the pinnacle of the wrestling conferences, so whenever you get the chance to wrestle a team that represents that conference, you know that’s going to be top-level wrestling.”

After the 157 pound weight class on Sunday, the Crimson was in a daunting 17-5 hole against the Terrapins. However, the team would not relent, finishing with an impressive four straight victories to take the 22-21 overall victory.

“In dual meets, there are only one or two matches in a day, and it’s really for the team, so every point matters,” junior Sam Goldman said. “I think that going in, everyone knew that regardless of how good the kid they were wrestling, everyone had to wrestle above their level a little bit and grab a couple of extra team points where it counted.”

In the 165 pound weight class, junior Peter Bearse responded strongly from a 2-0 deficit after the first period to win a 7-5 decision over Maryland sophomore Brendan Burnham, a triumph that proved to be the watershed moment of the meet and ignited the crowd in the third floor of the Malkin Athletic Center.

Senior captain Josef Johnson followed up Bearse’s victory with a resounding one of his own, obliterating sophomore Jahi Jones in a 27-7 decision in the 174 pound weight class in a technical fall win that gave the Crimson five team points.

In perhaps the biggest match of the day at the 197 pound weight class, senior Logan Kirby pinned his opponent, freshman Mansur Abdul-Malik, to give Harvard six team points and the lead. Senior Angus Cowell in the 285 pound weight class was able to hold off No. 6 wrestler in weight class senior Youssif Hemida to secure a major decision.

Goldman, who had a technical fall victory of his own, acknowledged the team’s ability to gain crucial points by extending leads.

“I think one of the biggest themes of the weekend was that we were going to out-condition and have a higher pace than the guys we were wrestling,” Goldman said. “I knew that if I kept the pressure on him, he would eventually break towards the end of the match. First period, he took a shot. I ended up stopping him and going behind, getting a takedown, and rode him on top a little bit. The deeper we got into the match, the more I could feel him giving up.”

At the end of all duels on Saturday, both the Crimson and the Cardinals were so evenly matched that the first, second, and third tiebreakers did not suffice to determine a winner. Based on the fourth criteria, which awards the team with the most turns on top, Harvard emerged victorious in a tightly contested 21-20 matchup against Stanford. The two teams had exactly the same number of team points, pins, technical falls, and accumulated individual scores.

“It was so even, and every single marginal effort by our guys was what really turned it,” Goldman said. “Guys getting over it in the third period, getting those last takedowns was really critical, so it was pretty good because everyone felt really good about it, and the whole team was involved in the win.”

Sophomore A.J. Jaffe epitomized this sentiment. With time waning in his bout against redshirt junior Isaiah Locsin, Jaffe pinned his opponent with one second remaining, giving the Crimson six team points. The fall gave Jaffe his fourth on the season and eighth of his career.

Sophomore Hunter Ladnier followed Jaffe with a dominating 17-0 fall of his own against Cardinal redshirt freshman Jake Barry, Ladnier’s second technical fall of the season.

Both Goldman and Dean won decisions of their own, Goldman 10-3 against Stanford freshman Anthony Le, and Dean 10-5 against freshman Judah Duhm. Although the Cardinals won the 197 and 285 duels, Harvard ultimately won by fourth criteria tie-break.

“I think we know that we have a pretty special and a special group of guys,” Goldman said. “These aren’t EIWA matches, so we start wrestling teams in our conference next weekend, and it’ll be really huge to take this momentum and avenge a couple of EIWA matches from last year ... and then hopefully garner postseason accolades for some individuals.”

Dean looks to continue the aggressive playstyle of his team moving forward into pivotal matchups.

“I think we’re looking to build off this style of extending our lead and constantly wrestling aggressively as we go into next week against Bucknell and F & M, both very winnable matches,” Dean said. “After that, it’s Cornell week, which is a huge week for us.”