‘The Best Job at Harvard’: Diana Eck and Twenty Years of Lowell Tea and Loyalty

Diana L. Eck and Dorothy A. Austin have served as the faculty deans of Lowell House for twenty years. This spring they will step down.
By Tamar Sarig and Sahana G Srinivasan 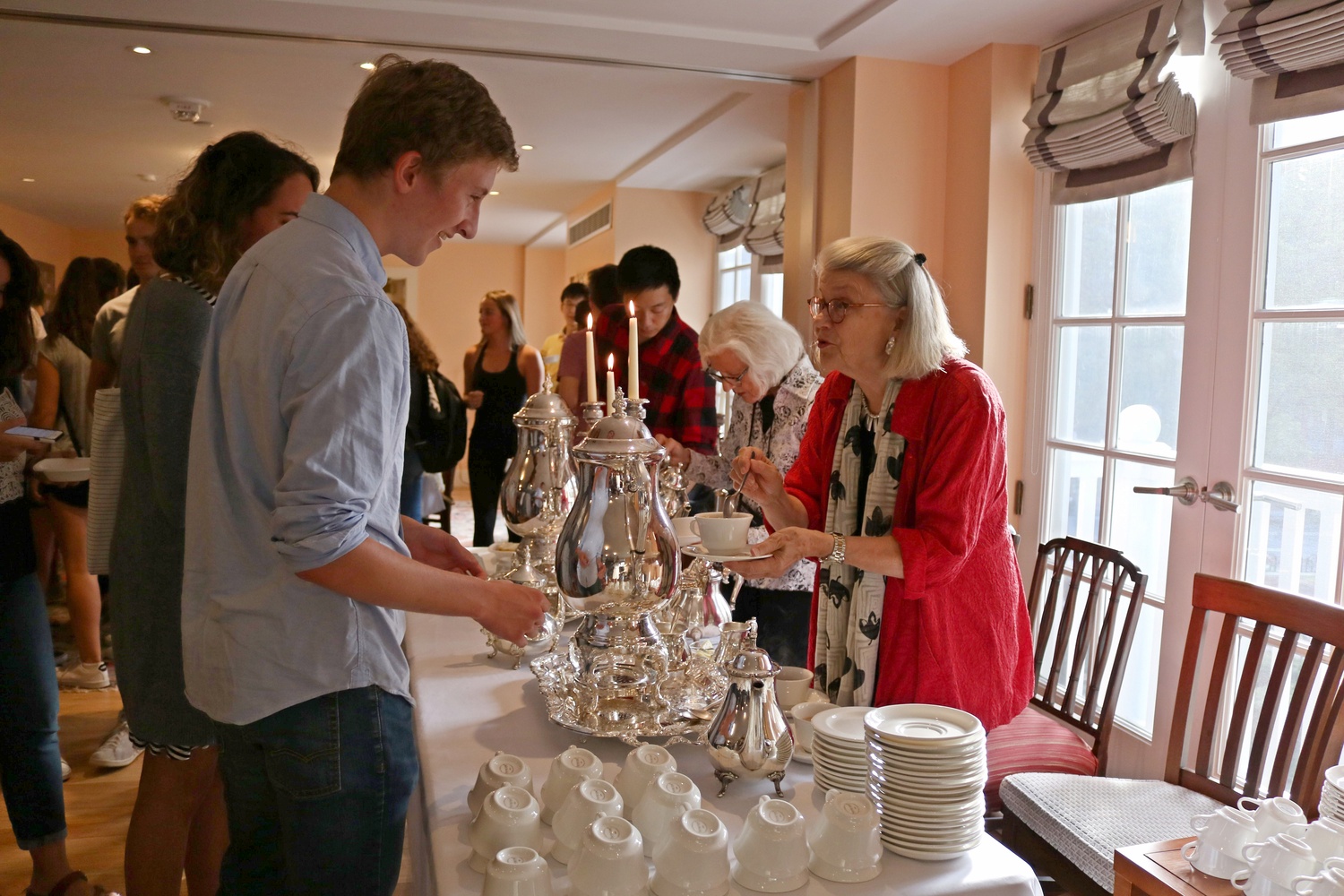 Two cats chase each other across the sitting room floor of the residence of Lowell House Faculty Deans Diana L. Eck and Dorothy A. Austin.

A photograph of Eck’s parents sits atop a cabinet, and images of the Hindu god Krishna adorn the walls. A set of chairs — plush, soft — face each other in an intimate circle on one side of the room. The house is cozy, eclectic, and welcoming, which Lowell students say translates perfectly to the deans' personalities.

“They’re just warm,” Salvatore R. DeFrancesco ’19, co-chair of the Lowell House Committee, said. “When you see them sitting together in the dining hall, I don’t think there’s a person from a senior to a sophomore that’s scared to sit next to them or say hi.”

Eck and Austin — the first openly gay, married house masters and now faculty deans of a House at the College –– have stood at the helm of Lowell for 20 years and lived together in Cambridge for even longer. Eck is a professor of comparative religion and Indian studies, and Austin a lecturer in religion and psychology.

At the end of the academic year, both will retire as faculty deans, though Eck will continue to teach.

“It really is time,” Eck said. “Lowell House has a tradition of rather long periods of faculty deans, but we didn’t imagine we would be there for 20 years; we really didn’t.”

When Lowell House came up for renovation in 2017 as part of the College-wide House Renewal project, Eck and Austin decided they should stay on longer than they had planned to maintain House traditions in the flux of swing housing. But since Lowell’s renovations would last two years, they said they saw the midpoint as a good time to “hand over the reins.”

Though the plains and mountains of the Rocky Mountain West seem a far cry from Lowell House and the pair’s current residence at 8 Prescott St.,, Eck’s path to Harvard began in Bozeman, Mont.

Eck was raised in Bozeman by her father, then an architect at Montana State University, and her mother, who served as vice president of Montana’s 1972 constitutional convention and then as a state senator for several decades.

Growing up in a Protestant household with little contact with other faiths, Eck did not find an interest in studying different religions until she left home for Smith College in the 1960's, at the height of the Vietnam War.

“I got very interested in the fact that we knew — as a culture, and I as a person — very little about the part of the world in which we were so deeply engaged,” she said. Since a junior year trip to Vietnam would have been “quite out of the question,” she enrolled in a program in Banaras, a holy city in India, where she felt fascinated by learning about a culture and religion different from her own.

Returning from the trip, Eck knew that religion would become the focus of her studies. She went on to earn her PhD in Comparative Religion at Harvard, and became a tenured professor at the University in 1983.

“It's impossible to be a scholar of religion and not know anything about Diana Eck,” Catherine A. Brekus ’85, chair of the Committee on the Study of Religion, said. Having worked with Eck since arriving at Harvard in 2014, Brekus knows her as a “remarkable scholar” but also as a committed and caring professor.

“She encourages a really vibrant conversation and makes room for people with different interpretations to have a voice,” Brekus said. “So this is clearly something that's really important to her in her work around inter-religious dialogue, that she wants everyone to be heard.”

Eck’s interest in religious pluralism has blossomed into a project of its own: the Pluralism Project, which she founded in 1991 with the goal of documenting the United States’s growing religious diversity and the ways in which America changes and is changed by the new religious groups that have arrived here.

“The things that I had studied primarily in India were now part of my own country, and I hadn't known that much about it, really,” Eck said of her reasons for starting the project. “I mean, I'd never been to a mosque in America.”

Curious about the shifting “religious landscape” of the United States, Eck decided to send the project’s interns, many of them students, back to their hometowns over the summer to take stock of the country’s increasing number of religious minorities.

“Professor Eck has been crucial to, number one, documenting the incredible religious diversity of the United States, and two, helping religious communities think about inter-religious dialogue,” Brekus said of the project.

“The Best Job at Harvard”

Though Eck has earned a reputation as a groundbreaking scholar in her field, she is perhaps best known and most beloved by Harvard students and faculty alike in her role as co-faculty dean of Lowell House, a position she and Austin have held since 1998.

“I cannot emphasize enough how much they’ve done to revolutionize the role that they’re in,” DeFrancesco said. “The sheer amount of contact they have with students on a day-to-day basis, the personal connections they’ve built, that has just totally changed the game. They are kind of the model to look up to, going forward.”

Austin, a clinically trained psychologist, ordained Episcopal Church minister, and Harvard Divinity School lecturer, grew up in Massachusetts and obtained a Masters from Boston University and a doctorate from Harvard in psychology and religion.

Eck and Austin’s relationship has intertwined with Harvard for decades.

They met during graduate school at an organ concert in Memorial Church, moved in together in Somerville and then moved back to Cambridge. In 1999, they fostered four teenage refugees from Kosovo in their Lowell House residence — they all still spend the holidays together.

Eck and Austin married in front of Memorial Church in 2004, soon after Massachusetts legalized same-sex marriage, processing back to Lowell House after the ceremony.

“What makes them different from a lot of people is this quality of receptivity. It’s almost an emotional quality. There’s a lot of warmth and love here, and it starts with Diana and Dorothy,” Elizabeth Terry, a Lowell House administrator, said.

“Both Diana and Dorothy possess humility and intelligence in equal measure and that is also an interesting combination to model as human beings,” Terry said.

Now, Eck and Austin often dine at Lowell with students and also host what Lowellians say is the longest-running tradition at any of the College Houses — Lowell Tea. Every week, they serve tea to Lowell undergraduates, pouring and adding milk and sugar as requested.

“It's just a very exciting, multi-generational, multi-sided job. And I loved it. I thought it was the best job at Harvard, by far,” Eck said. “It also enabled me to really focus more on the local, on what was happening right at Harvard, and in our own communities.”

Eck and Austin’s simple presence at Lowell has changed the House.

“I think Abbott Lawrence Lowell...had a history of being pretty anti-Semitic and homophobic, and I think having them as the first openly gay, married faculty deans on Harvard’s campus, I think kind of took that and co-opted all the traditions that Lowell had and brought them into what they are today," Nicholas C. Colon ’19, Lowell House Committee co-chair, said.

Before 1970, then-House masters interviewed and admitted sophomores into Houses via a “draft” system. From 1970 to 1996, when the class of 1999 was sorted, the College used a preference-based lottery system. Students ranked choices, which led to Houses becoming increasingly homogeneous in socioeconomic status, identity, and concentration.

Eck and Austin began their deanship two years after the housing system changed, the first year in which all undergraduates had been randomly assigned a House.

“I would not have wanted to be in Lowell House under those circumstances,” Eck said, referring to the years before blocking assignment was randomized. After the system had already changed, the two assumed their roles and watched the Houses evolve into “microcosms of the diversity that Harvard has become.”

John “Sean” G. Palfrey ’67 and Judith “Judy” S. Palfrey ’67, the faculty deans of Adams House, stepped into their role just one year after Eck and Austin. In a turbulent time of increasing diversity at Harvard, major reforms to the housing assignment system, and a variety of campus protests, the Palfreys remember their Lowell House counterparts as a critical support system.

“They're warm as friends and family and they've been able to keep a flavor all of their own at Lowell House and for the students,” Sean Palfrey said.

“[Diana] absolutely loves Harvard, not in a rah-rah Harvard way, but in a truly embedded and family way,” Judy Palfrey added. “And that's shown in the fact that she and Dorothy support their senior common room so deeply, and all of the history that is Lowell House.”

Eck and Austin have continued traditions like tea and the May Day Waltz — in which students dance on Weeks Bridge toasting champagne and strawberries on May 1 —, have helped cultivate new traditions like Bacchanalia and Yule Ball, and have supported the House Committee in hosting events even as residents moved into swing housing during the renovations.

“She eats with students all the time; they invite students into their home all the time, and I think that that ongoing eagerness to learn about students’ experiences and not to assume that because they’ve been doing this for 20 years they know what the Harvard student experience is like, but to actually realize that each student’s experience is unique — that sort of continued eagerness to learn about the individuals in the House has been inspiring to watch,” Caitlin M. Casey ’03, resident dean of Lowell House, said. Casey has worked with Eck and Austin since 2012.

“Diana and Dorothy were open and receptive to the idea, gave it plenty of room to grow or be modified, and did not try to manage results instantly,” Terry said. “That ability to simply let things evolve on their own is a type of skill. They understood that this is a whole organism, the House, and in order to grow and to flourish like a plant, you have to leave it alone and let it do its thing a little bit.”

Twenty years after the duo first took up residence in Lowell House, the end of an era is fast approaching. Dean for Faculty Affairs and Planning Nina Zipser and Economics Professor David I. Laibson ’88, the incoming Lowell faculty deans, have begun pouring for students at the weekly Lowell tea with Eck and Austin.

“They’re quite lovely people and both with a long history at Harvard, and they have so enthusiastically embraced the idea of House life. They’ve seen it, experienced it themselves, and are really excited about it,” Eck said. “We’re leaving it in good hands.”

With her newfound spare time, Eck intends to renew her work on a forthcoming book, centered on an idea she calls “The Age of Pluralism.” She and Austin will also spend more time in Swansea, near Austin’s hometown by the water.

But Eck plans to continue teaching at the College for the foreseeable future.

“It’s bittersweet. It’ll be sad,” Eck said of their upcoming departure. “There will be so many things that we’ll miss, but we live right in Cambridge. We’ll move to the house that we have here. We’ll keep an eye on what’s going on.”