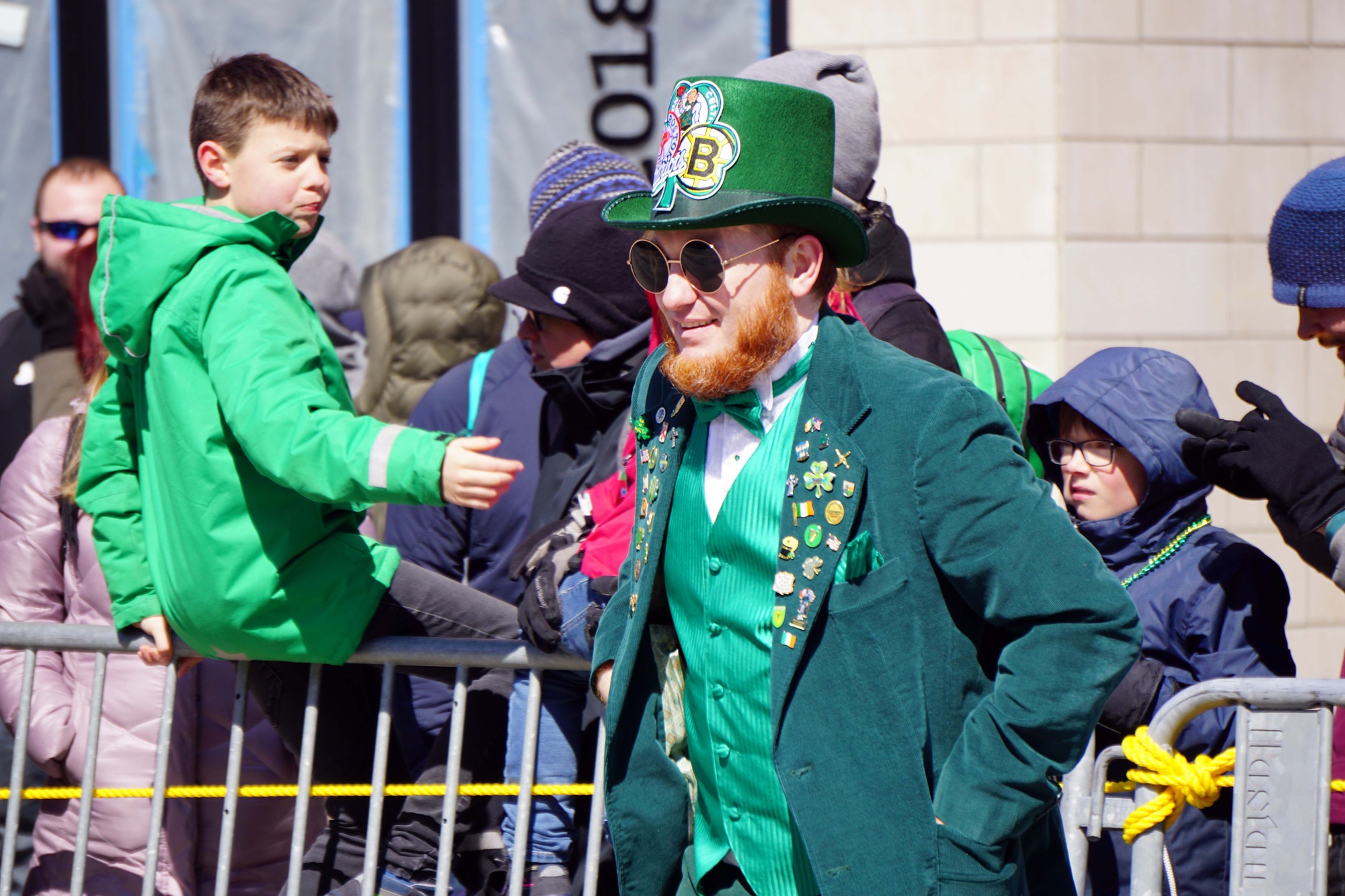 Kiss Me, I’m Very Not Irish and Cold and Confused

It’s stupid cold out today, this March morning with the sky frozen cloudless glacier-blue. The bitter wind and whining bagpipes of the Saint Patrick’s Day parade turns my face numb. I’m desperately clutching two slices of pizza, jostled to and fro among the low-slung buildings of South Boston.
By Alan R. Dai

It’s stupid cold out today, this March morning with the sky frozen cloudless glacier-blue. The bitter wind and whining bagpipes of the Saint Patrick’s Day parade turns my face numb. I’m desperately clutching two slices of pizza, jostled to and fro among the low-slung buildings of South Boston.

Here, at the intersection of Broadway and Dorchester Street, college students and families and grey-haired men line the street, shouting and watching the parade go by. I keep stepping on empty Bud Light cans. Someone blows mango-flavored Juul smoke on my first slice, so I’m not too mad when an unseen thief snatches it off my plate and disappears into the emerald-clad crowd.

I, nibbling on my last piece, unfortunately manage to catch the eye of a ring of very drunk dudes. All of them wear variations of the Celtics jersey and hoodie and backwards cap theme that’s common here. One of them, sporting novelty glasses that read “IRISH” (the eyeholes are in the R and S), begins a chant: “EAT THAT SHIT! EAT THAT SHIT!” They all join in. I smile nervously and pick the mushrooms off my pizza. Somehow the capital letters are audible. I soon get used to this.

I never quite understood St. Patrick’s Day. I have hazy elementary school memories of a frantic search for something—anything—green to wear before that day in school; of teachers’ vague, smirking allusions to Guinness and classmates asking, jokingly, if I was Irish. So I figured visiting Boston’s famed St. Patrick’s Day parade—held first in 1737, the oldest such celebration in the world—might help.

A Bostonian friend warned me: “It’s a lot.”

The chaos begins at Park Street. There are a few obvious parade-goers on the T when I board at Harvard Square, wearing green shirts and socks and shamrock face paint, but it’s only when we reach Park Street that I see what my friend warned me about: the platform packed with revelers waving green garlands, the pushing, shoving, yelling as the T doors open and the car fills. A mass of high schoolers—more of the jersey-hoodie-backwards cap crowd—begins shouting.

“Hey, we’re all here, man!” a redhead begins. I’ve managed to nab a seat, and I can see only the shirt of the woman standing in front of me. Adorned with white shamrocks, it reads “Bad and Boozey”.

“We’re all so tight right now,” another adds, ambiguously.

A brief silence falls. I hear the snap-crack of a Juul hit somewhere. I see a teen raise his face above the mob and howl to the ceiling, “Hi, my name is Brandon, and my favorite color is green!”

The crowd likes this: A “Yeah!” in unison.

Then: “Hi, my name is Chad and my favorite color is actually green,” shouts another. Another “Yeah!”

We’re not even at Downtown Crossing yet. A vape cloud emerges from the herd, a sudden whale spout that lingers in the sallow T light. A gangly teenager wearing a Vancouver Grizzlies jersey climbs a pole and cries, “I’m Jared, and I hate my family!”

Finally, as we approach Broadway, “Seventh Nation Army” chants break out, followed by a half-hearted “Ireland! Ireland!” that quickly dies out. The car grinds to a halt, but the call-and-response continues. “HO-LEE-FUCK! BOSTON BABY, LET’S GO!” a thick Boston accent shouts as we surge outwards. Let’s go, indeed.

St. Patrick’s Day is, ostensibly, a cultural and religious celebration held on March 17 every year. Saint Patrick, patron saint of Ireland, is widely believed to have brought Christianity to Ireland. Diasporic Irish communities, like those in Boston and New York, popularized the day of his death as a secular celebration of Irish identity and culture. Today, it is celebrated around the world. Savannah, GA and our very own Suffolk County, MA, are the only American municipalities to legally recognize it as a holiday.

Boston’s parade is held annually on the Sunday closest to March 17, and is organized by the Allied War Veterans Council of South Boston as a celebration of the holiday. It promises good clean fun for the whole family: their website specifies that “[we] will not allow the advertisement or display of one’s sexual orientation as a topic that should in any way be depicted as a theme of our parade”—likely in reference to a 2017 controversy over the temporary ban of a BGLTQ military veterans group from the parade. Their Code of Conduct also prohibits political protests and improper language.

A vendor selling parade apparel out of the back of his van holds up a shirt that reads, “Keep Calm and FUCKIN’ GO NUTS,” with the “FUCKIN’ GO NUTS” in perky Dunkin’ Donuts font. Barricades and rope lines are set up along the street. A news chopper dangles in the sky, black against sharp blue, as the first ambulances and fire engines pass. People clap weakly as SWAT armored vans trundle down the street. A policeman walks by, waving around a selfie stick.

Politicians drive by, hands waving outside black Chevy Tahoes and darkened faces inside. A man in a sparkling turquoise suit moonwalks and twirls to the crowd’s delight. Marching bands pass, from college to high school to elementary school troupes. One high school drummer’s chin strap has blown into his face, and he scrunches his eyes to see.

Everyone here is very proud of their Irishness, or very proud of the fact that some people are proud of their Irishness, or very proud of our troops, or very drunk. I was curious about what kind of ethnic identity—identity in general—can be found by getting wasted on a Sunday morning, wearing a Celtics jersey and, maybe, buying one of the tiny $5 Irish flags they’re selling by the T stop. Not to say everyone here is like that—there are plenty of families in attendance, plenty of people for whom this is an annual tradition and for whom Ireland is more than a distant green dream. But still.

An emerald-green, box-shaped Scion rolls by, plastered with Guinness logos. “SINN FEIN BABY,” a middle-aged man behind me yells. “Up the republic!” says another. Further down the street, I hear, “Irish Christmas! Yes!” A woman holds up a bottle of tequila mix for her friend to chug, while a third films.

An inflated leprechaun, ginger beard and top hat and all, dances on a flatbed trailer to Katy Perry. Another flatbed rolls by, blasting AC-DC. It carries signs with “Stand for the Flag, Kneel for the Cross” emblazoned in faux Gaelic font over American and Irish flags.

OUTVETS, the recently unbarred organization for BGLTQ veterans, marches by. A man teeters by on a unicycle, clutching his green bowler hat. I watch a Times Square cast of characters dance on a trailer: Captain America, Batman, a minion, an Elmo with a misshapen face, a poorly anthropomorphized Pikachu, all convulsing to the beat. Men in Revolutionary War uniforms fire off a musket volley. A bus plastered with ads for Shiva Ayyadurai’s Senate run proclaims, “Only a REAL INDIAN Can Defeat the Fake Indian.” His headshot is next to a poorly edited photo of Elizabeth Warren, a notionally Native American headdress photoshopped onto her head, her face darkened brown-red.

It’s around 3 p.m. by now. Further down the parade route, people are hanging out second-floor windows, toting Solo cups, throwing beers to the crowd below—which is thinning rapidly, and, more strikingly, becoming less green by the block. The die-hard, green body paint crowd has been left behind; relatively normal-looking people, wearing “Kiss Me, I’m Irish” hoodies and Timberlands, are walking the parade route now. It’s all over.

My hands have been frozen for a good 15 minutes now, and I hustle my way back to the T stop. The cleanup has already begun. Boston Public Works employees are out in full force, sweeping away the remnants of this cold Sunday afternoon: beer cans, nip bottles, candy wrappers, plastic plates, Irish flags. It’ll all be back next year.

— Magazine writer Alan R. Dai can be reached at alan.dai@thecrimson.com. This is the fourth installment of his fashion column, Live Fresh or Dai, in which he travels around the city to various people and places that are, however obliquely, fashion-related. Next time: Anime Boston. Follow him on Twitter @dai_alan_dai.