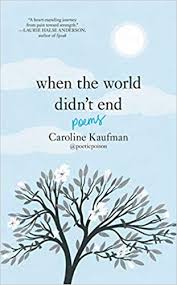 On the evening of Oct. 1, the formerly anonymous poet Caroline R. Kaufman ’21 — known on Instagram as @poeticpoison — read selections from her new collection, “When the World Didn’t End: Poems,” for an audience at the Harvard Book Store.

The collection is the follow-up to Kaufman’s debut book “Light Filters In,” an exploration of depression and sexual assault lauded by Kirkus Reviews as “a lifeline for survivors” with an “authentic” authorial voice. HarperCollins published that collection during her first year at Harvard College in the spring of 2018, the same year Her Campus named Kaufman one of their 22 Under 22 Most Inspiring College Women.

Kaufman described the time since the release of “Light Filters In” as a surprising survival, the conceit which titles her new book. “When I was struggling the most with mental illness [. . .] I really felt like there was no future for me,” she admitted in her opening remarks. “I created this idea of an apocalypse.”

Kaufman said she was ready for the end, but it didn’t come. “[She] opened up a window and saw that the world was still there,” one of her poems reads. Kaufman’s new collection grapples with the aftermath.

“I think it to myself every day, honestly. Like, what now?” she said. “What am I going to do? How will I live this life?”

Though her poems respond to immense tragedy and trauma, Kaufman made sure to point out that her second collection sports a good sense of “bitterly sarcastic” humor. In one piece which garnered particularly loud chuckles from the crowd, she compared her mediocre self-image to the notoriously mediocre Cleveland, Ohio. Tomasz P. Wojtasik ’21 singled it out as a favorite. “Everyone in the Midwest kind of thinks of Cleveland as, like, a place that exists, but you wouldn’t go [to], unless there was a wedding or something,” said Wojtasik.

Kaufman’s ability to laugh about her struggles with mental health contribute to the sense of forward motion she hopes to create with “When the World Didn’t End.”

“I wanted a reminder that I didn’t have to be angry or upset,” she explained. To serve as that reminder, she writes in one of the last poems of the collection, “If the world is to blame for you losing your way, then the world is to thank for you finding it again.”

Such one-liners have helped Kaufman gain massive popularity on social media: Her Instagram account has almost 200,000 followers. “I actually got an extra copy [of the book] for one of my friends’ little sisters who’s a big fan of hers,” said Erin J. Wright ‘21.

Because most Kaufman enthusiasts have only encountered her work on screens, and many did not know the name of its author (due to her previous anonymity), listening to her speak her own words had a powerful impact on some audience members. “She has a great voice,” said Melissa E. Drake ’21. “It gives it a whole ‘nother dimension.”

Even Kaufman’s parents, Joseph “Joe” H. Kaufman ’89 and Janet B. Korins ’88, only learned their daughter was behind the @poeticpoison account when publishers approached her for a book deal during her junior year of high school. “It was an interesting dinner conversation,” said Korins.

“The whole thing is somewhat perplexing, or surreal,” said Joe Kaufman. He and Korins attended the reading on their twenty-fifth wedding anniversary, joining Caroline Kaufman’s cheering section of friends and family which filled the room.