‘Meaning Train’ Goes Off the Rails 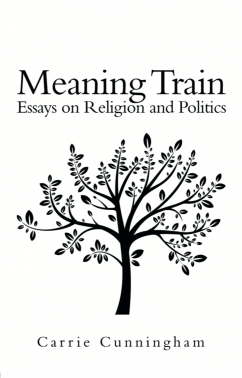 “Americans should care about race in our country.” Who knew the key to racial change in America was so easy? In “Meaning Train,” Carrie Cunningham ’93 proposes that her collection of short essays on religion and politics will create a “nonviolent and good moral compass humans can embrace to make the world a better place.” But with oversimplified resolutions and extraordinarily brief remarks, Cunningham’s agglomerated essays more closely resemble an annotated bibliography than the intricate book she claims to write.

The essays that make up “Meaning Train” are short and only loosely related to each other within five parts: Race, Judaism, Christianity, Islam, and Ecumenism and America. In “Part 1: Race,” Cunningham begins by explaining how Abraham Lincoln helped make America what it is today — “a place of promise and hope… that elected Obama its first black president.” In actuality, Cunningham doesn’t explain at all; instead, she details how Doris Kearns Goodwin how Lincoln changed America in the book “Team of Rivals.” Her extrapolation of Lincoln’s significance in Obama’s election seems distant from the substance of her essay, but these unrelated conclusions become common throughout “Meaning Train.” Rather than use paragraphs to back an argument, Cunningham summarizes a book, person, or interview before jumping to an unbacked solution of something that “should” be: “We should advocate for measures that will help people, not divide them”; “We should center our aid on giving love and hope for the helpless”; “We should all exhibit grace to Native Americans.” Rather than create a moral foundation, these prescriptive statements grossly oversimplify current issues in contemporary media and come across as distant from reality.

Cunningham’s style is consistent from cover to cover: She tends to open with a broad moral statement, then introduce a figure or book that exemplifies the statement. The simple structure feeds the oversimplification of the issues regarded in the book. But even more so, it undermines Cunningham’s goal of weaving together ideas of race, religion, and politics. A compilation of essays should build on each other. Instead, this collection lacks synthesis and each essay offers its own ideas, and the realms of religion, race, and politics rarely intersect in any meaningful way.

The true tragedy of “Meaning Train” is that it fails to give meaning to anything. Broad ideas of what the world should be doing better are more likely to take away meaning than provide it without a direction for action. Cunningham provides no effective direction to create change, which seems to be a critical void when the book is intended to be a foundation to make the world a better place.

Even so, what little value the essays have comes from the books and people Cunningham references. Her summaries are as effective as they are brief, but this might give “Meaning Train” a purpose of pointing readers toward a better choice of literature. The intended audience is altogether unclear throughout. Because of the simple structure and broad claims, it is hard to identify any reader who would benefit from “Meaning Train.” Cunningham’s use of overly technical vocabulary makes the essays less available to younger and less educated readers, while also failing to introduce new ideas in the realm of social justice. As a progressive Christian, Cunningham speaks on general ideas of faith and Christianity, but fails to uproot much theological meaning, skirting on the outside of valuable spiritual literature. “Meaning Train” may best be suited to introduce topics of social justice, but in 2019, there is a host of better options.

While “Meaning Train” adds little value to today’s social context, Cunningham has perhaps set her own moral compass for writing on social change in the future. There is a breadth of topics that Cuningham may be more successful pursuing individually, and hopefully with a stronger evaluative voice of her own. However, that is all to come; for now, “Meaning Train” can wait.