How Arts Criticism Fits Into Our World Today 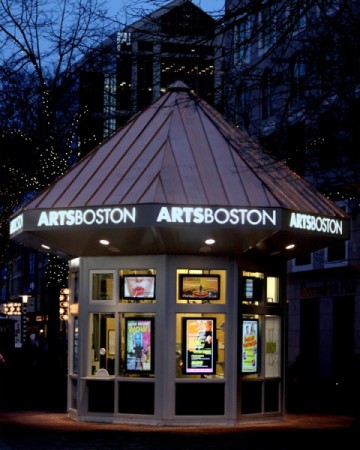 ArtsBoston, which recently hosted an art criticism panel, has a ticket booth outside Faneuil Hall. By Courtesy of ArtsBoston
By Hannah T. Chew, Crimson Staff Writer

Is arts criticism a dying industry? How has social media changed arts journalism? How did we get here? In its “Live Arts Criticism Panel,” ArtsBoston assembled a panel of editors and critics to discuss the changing landscape of arts criticism and address the field’s biggest issues. Partnering with the Front Porch Arts Collective and the Boston Center for the Arts, ArtsBoston’s event drew together artists and critics from all over Boston’s art scene.

“My central goal around creating this panel was to give everyone in the arts criticism industry as well as people in the arts the opportunity to talk and have a dialogue about how the reporting and arts criticism have changed in the past years,” Florestal said.

The panel began with brief introductions of the panelists, and Florestal launched the discussion by asking how each of the panelists began writing criticism. Siegel kicked off by detailing his college work as a journalist, an experience shared by some of the other panelists. All the panelists, however, described radically different career routes. They were united by the fact that none of them intended to be in their current positions, and were instead guided by passion and circumstance.

Florestal then shifted the conversation to the recent changes in arts criticism, spurring a conversation around diversity, technology, and journalism. Garcia spoke on the changes to journalism and culture as a whole, while Madonna mentioned the power of social media in mobilizing fans and how such shifts have affected the role of critics.

When questioned about what changes they’d like to see, the panelists discussed facets of the arts criticism community. Siegel spoke on the “death of expertise,” while Garcia brought up diversity within the field, and Boland expressed a desire for the number of critics to increase.

Florestal concluded her moderated questions by asking about the differences between arts criticism in Boston and arts criticism elsewhere. Johnson and Siegel both highlighted the duality of Boston’s arts scene, with its depth and history but its smaller size and renown compared to New York City.

The panelists then took audience questions, which centered primarily around the role of social media and accessibility within the field. Closing out this portion of the evening, panelists gave budding arts critics advice, ranging from building a portfolio to contacting PR representatives.

After the discussion, audience members remained in the space, talking to the various panelists and other members of the community.

Spencer T. Icasiano, an attendee and arts writer for the ARTery, said he had further questions after the panelists finished.

“I couldn’t help but notice four of the five panelists were white, and none of them were black or indigenous people of color. This panel would have benefited from the perspectives of those who are the most marginalized among us. Those are some questions I still have,” Icasiano said.

Kristin S. Torres, a podcast producer and researcher at WBUR, commented on the content and issues covered by the panel.

“I was very interested in talking about pipeline issues, and how commentators of color can penetrate the arts criticism industry,” Torres said.

In response to the longer discussion on the role of social media, Torres responded, “I feel like the social media thing has been talked about so much, there’s no getting around it, it’s the way to reach audiences.”

Audience members and panelists alike stayed to socialize, and members of the community expressed a desire to continue this conversation.

— Staff writer Hannah T. Chew can be reached at hannah.chew@thecrimson.com.