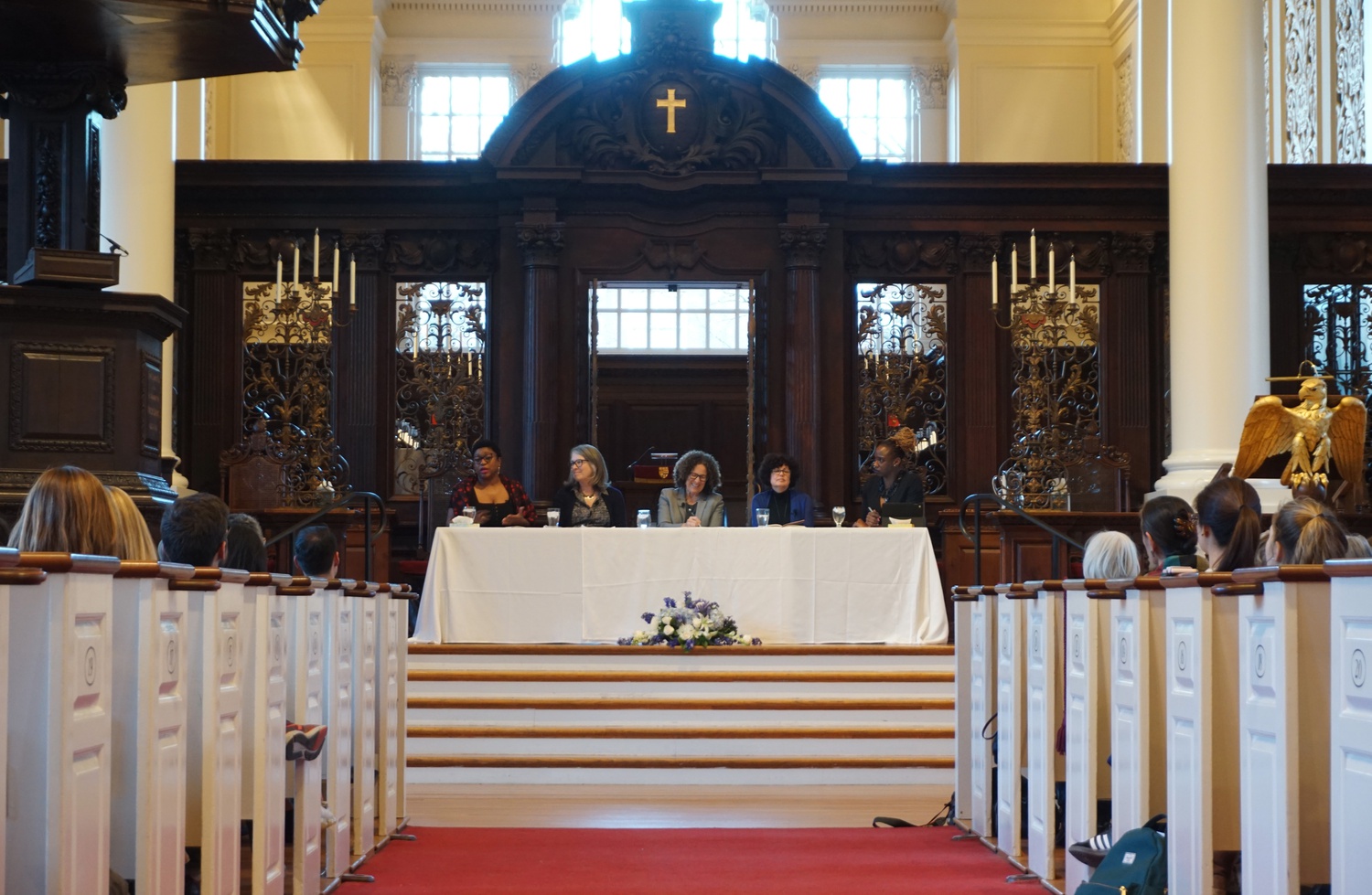 High-profile women who worked in the Obama's administration speak about their work in the White House and on issues of workplace diversity, gender equity, and domestic violence on a panel organized by the Office of Sexual Assault Prevention and Response. By MyeongSeo Kim
By Isabel L. Isselbacher and Michelle G. Kurilla, Crimson Staff Writers

The Office of Sexual Assault Prevention and Response kicked off Sexual Assault Awareness Month with a discussion about gender based violence and advocacy for victims of sexual assault in a panel at Memorial Church Monday evening.

The event featured four female activists who worked in the Obama administration, including Lynn Rosenthal, the first-ever White House advisor on violence against women, and Bea Hanson, the Executive Director of the New York City Domestic Violence Task Force. The panel, which garnered a crowd of roughly 100 attendees, focused on the intersection of government work and activism.

Rosenthal spoke about her efforts to help college students navigate administrative processes in reporting instances of sexual assault at their schools that she said can often turned into “victim-blaming.”

“It was about putting pressure on the administration to make a difference for the best and to change the climate,” Rosenthal said.

In addition to discussing power dynamics and reporting processes, the panelists also reflected on the challenges of navigating cultural differences and intersectionality in their work. Deesha Dyer — the special assistant to the president and social secretary in 2015 — said activists have a “duty” to reach out to other communities besides their own.

“I think what we have to do is be willing to admit that we are not experts on the topic and that we do not represent all women, all men in any which way or shape,” Dyer said. “It’s also staying in your lane of what you know.”

After the panel, Nina N. Harris — an education specialist at OSAPR who moderated the discussion — reflected on the importance of “sharing the work” of activists in this field.

“One of the things that was reflected in the conversation about just coalition building and partnerships and how significant they are with changing organizational and institutional capacity,” Harris said.

“I think it’s just a really important conversation to have, to see what they think can be done now,” Mahajan said. “This does kind of give me a bit of hope for what activism can do, especially activism on this campus.”

The panel marks the first of a series of events that OSAPR will host this month, which include a study break, art exhibition, and discussion about sex and BGLTQ identity. In an email to College students Monday morning, OSAPR Director Pierre R. Berastaín Ojeda ’10 invited students to Monday’s panel as well as the rest of OSAPR’s programming “to get involved, learn more, and help raise awareness” about sexual violence and “other forms of interpersonal harm” throughout the month.