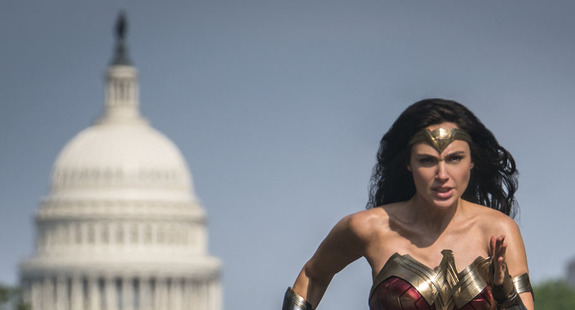 The 80s are in right now. Mom jeans and large-framed glasses are back in style. Polaroid cameras line the shelves of Urban Outfitters, marketed to Gen Z shoppers alongside fashion accessories. The Netflix series “Stranger Things” broke viewing records for the streaming service, receiving widespread praise for its mid-80s nostalgia. Now, three years after 2016’s “Wonder Woman” became the highest grossing film by a female director (to be topped later by “Captain Marvel” and “Frozen II”), director Patty Jenkins has channeled the pull of the 80s aesthetic into the upcoming sequel: “Wonder Woman: 1984.”

The trailer promises all the epic fight scenes of a superhero movie and all the glamour of the 80s, as both action film and period piece. From the neon lettering to the background music — an instrumental remix of New Order’s “Blue Monday” — the trailer makes the aesthetic feel of the movie clear and cohesive.

In terms of plot, the trailer raises plenty of questions. The first conversation in the trailer is — in an exceptional turn for a superhero movie — a conversation between two women: Diana (played once again by Gal Gadot) and Barabara Ann Minerva (Kristen Wiig). In this scene, it seems the two are friends. However, in the Wonder Woman comics, Barbara doubles as the villainess Cheetah. What might happen to destroy their initial friendship? Will this be a story of betrayal? Later in the trailer, we see Diana reunited with her love interest in the first movie, Steve Trevor (played once again by Chris Pine). How did Steve return from his certain death seven decades ago, looking not a single year older? Will the two be reunited for good, or is there a catch?

The year chosen, 1984, makes a powerful allusion to George Orwell’s novel of the same title. The dystopian themes that run through Orwell’s novel — the dangers of government corruption, mass surveillance, and empty propaganda — are all hinted at in the trailer. “Welcome to the future,” says Maxwell Lord (Pedro Pascal) from every TV screen in the mall. In the Wonder Woman comics, Lord is a powerful businessman and villian. Here, we see him in a suit with his hair gelled to the side, with backgrounds like a red carpet and an image of a giant diamond, radiating opulence, wealth, and the consumer mindset of the 80s. “Life is good, but it can be better,” he continues, “and why shouldn’t it be? All you need is to want it.”

The lines are cut together with clips of disarray. Civilians run out of the mall, screaming, as cop cars pull up with blazing sirens. Diana leaps from a balcony to the center of the mall with her glowing lasso, taking out gun-wielding men and shattering surveillance cameras as shoppers cower around her. While the first Wonder Woman movie was set primarily in London, much of “Wonder Woman: 1984” seems to be set in Washington, DC. The trailer features a scene in which Diana fights off men in suits in the White House. Deliberately or not, the dystopian themes of the movie resonate with troubling parallels to American politics today.

It should be noted that while the success of the first “Wonder Woman” movie and the anticipation around “Wonder Woman: 1984” (as well as the success of “Captain Marvel” and the anticipation around Marvel’s “Black Widow”) reflect a rising popular demand to give these (white, cisgender) female superheroes their own narratives, this trend doesn’t necessarily mark progress for women of color and queer or trans women who still aren’t represented in the lead roles of blockbuster superhero films.

While Diana was out of place in WWI England, in 1980s America, the tables have turned. The last scene of the trailer shows Steve struggling to navigate a decade that Diana better understands. “It’s all art,” she explains to Steve, outside the Hirschhorn National Museum of Modern Art. In response, Steve pauses to examine a trash can. “That’s just a trash can,” Diana tells him. We empathize with Steve, awkward in his zip-up jacket and fanny pack, trying to act like he knows what’s going on.

— Staff Writer Marie A. Ungar can be reached at marie.ungar@thecrimson.com.