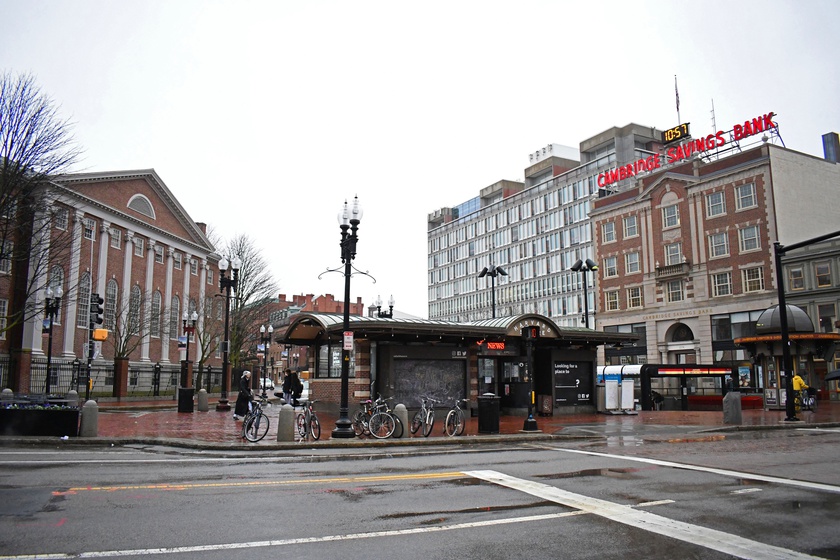 A Harvard Square Without Harvard

With some estimates predicting that 40 percent of local businesses will not reopen after the pandemic ends and that another 25 percent will fail within the year, Harvard students may return to a neighborhood that looks radically different from the one they left in mid-March.

On March 10, Harvard gave undergraduates five days’ notice to pack up and leave campus — the University had begun shutting down due to the COVID-19 pandemic. That Tuesday was also the day Nina S. Hovagimian threw her hands up in defeat.

“There goes my business,” was all she could say. Her store, Café Pamplona, like many others in Harvard Square, has financially staggered amid the pandemic. Stack sky-high rents on top of a dependence on student and tourist patronage, and a Square without Harvard is a Square without a livelihood for the more than 350 businesses that call it home.

Café Pamplona has stood stolid for two generations as a Harvard Square landmark the size of a two-car garage. The quaint 12 Bow St. coffee shop was the first café to open in the area, in 1958. As the neighborhood around it grew into today’s tourist hotspot, Pamplona’s checkered floors, lemony-colored interiors, and original menu endured. While nearby storefronts constantly changed hands during periods of rent hikes, Pamplona remained. But after 62 years, the coronavirus might just kill the café.

Hovagimian describes the now-empty Square as a “ghost town.” Between the University restricting operations and the Massachusetts governor issuing a stay-at-home advisory, valuable foot traffic has vanished. She can no longer maintain her two part-time workers. One is on unemployment; the other is a student sent home.

She and her husband see two or three customers a day. They’re a handful of habitués: one gets a daily soup; another orders sandwiches each week.

“The regular six or seven customers — I’m going to tell you the truth — they’re the ones who are feeding my kids,” Hovagimian admits, voice cracking.

Like many other Harvard-reliant businesses, the café runs a tight margin in the winter months while students are on break, forging ahead to a more bustling spring. But that spring never came. “There’s no Commencement, there’s no Boston Calling, there’s no Fourth of July. All of our busy season is not busy,” Hovagimian says. “Financially, it’s impossible for us to survive without these two months.”

Many business owners have said relief programs offering loans, like the Paycheck Protection Program, are not enough. They say they need grants to support their businesses. But Hovigimian says she doesn't know what will be enough — no amount of emergency grant money can bring back students. “There’s no way to replenish the business if Harvard’s not there,” she says. “I don’t think our business will survive this. I don’t think we are gonna be able to make it.”

As of May 18, Hovagimian says she will be closing her business. Café Pamplona is filing for bankruptcy.

When asked to describe the current atmosphere in Harvard Square, Theodora M. Skeadas ’12 pauses. “People are very transactional, very fast paced,” she says. “There’s a lot of tension in the air in social interactions these days.”

Skeadas is the Executive Director of Cambridge Local First, a nonprofit network of small businesses that promotes local commerce — and she’s extremely worried about the Square. With some estimates predicting that 40 percent of local businesses will not reopen after the pandemic ends and that another 25 percent will fail within the year, Harvard students may return to a neighborhood that looks radically different from the one they left in mid-March.

“The longer this goes on, the more small businesses will drop,” Skeadas says.

While small business owners like Hovagimian have scrambled to adapt without a playbook, larger corporations in the Square, with more funds and logistical capabilities, seem to be riding out the crisis. The multinational Kung Fu Tea — which opened its 1160 Mass. Ave. location in late January but temporarily shuttered due to the pandemic — had been pandemic-planning even before the first confirmed Boston coronavirus case in early February. Their Massachusetts marketing manager Bella Chen says KFT prepared clear-cut phase-out and phase-in business protocols, preempting the state’s tightening and eventual loosening of restrictions. No staff have been let go, and all Massachusetts locations reopened during the week of May 17.

But overall, prior to Massachusetts’ Phase One reopening on May 18, fewer than 20 eateries and about five retailers remained open in the Square, according to Denise A. Jillson, director of the Harvard Square Business Association.

The ones that remained have had to rapidly adapt. After two years of staying committed to face-to-face customer interaction, Black Sheep Bagel Cafe partnered with food delivery apps for the first time. Harvard Book Store is fulfilling online orders through a third-party seller and now offers a book recommendation service on their website. The Brattle Theater is holding virtual film screenings and offering to curate movies available on popular streaming services.

Despite the challenges they face, small businesses — which make up 70 percent of the Square — have the unique advantage of being able to quickly make decisions and adapt their business models, Jillson suggests. In fact, she says, “the [businesses] that have been able to successfully remain open have been the small, locally-owned independents.”

Some of these business owners have thrived unconventionally, exploring new markets in the cyber world.

Esmeralda R. Lambert has run Esmeralda Jewelry out of 54 Church St. for the last six years. The store sells socially responsible jewelry produced by women in the Dominican Republic, where Lambert emigrated from in 2010. She was about to expand with an upcoming second location in Boston’s iconic Faneuil Hall Marketplace, but the pandemic has put her plans on hold. Harvard announced it was shutting down its campus, and she closed her doors the same week. For the month of April, she had zero sales.

On Lambert’s now-revamped e-commerce site, decorated stationery, hand sanitizer, and care packages have supplemented the jewelry selection. She has also partnered with a clothing company to sell face masks. After she went “knocking on e-doors,” a local bank and 60 families pre-ordered more than 1,000 masks.

Lambert, ecstatic and optimistic, ended up virtually earning what she would have made in her pre-pandemic brick and mortar. But most Harvard Square retailers just don’t have the capacity to compete with established online retailers, let alone transfer all in-store catalogues online. Forty Winks Lingerie Boutique at 56 JFK St., which celebrated its 10th anniversary last month, has only seen a fourth of regular sales after going online.

Skeadas believes that the “biggest challenge affecting Harvard Square in particular is the rental market, which has skyrocketed in recent years and is just unsustainable.” Harvard Square Acupuncture and Massage, for instance, had to recently relocate to 1120 Mass. Ave. after becoming unable to pay its $64,000 annual rent at its initial 12 Arrow St. location. The investments of international real estate and financial entities have driven rent up high enough to displace many local businesses even under normal circumstances, Skeadas says. The consequences during a pandemic may be even worse, with collapsing revenues threatening to make already elevated rents increasingly unaffordable.

“Local management is far more invested in the community and the wellbeing of the community,” Skeadas says, and therefore businesses with local landlords may be more likely to recover.

In response to these obstacles, community organizations have instituted a number of efforts to aid local businesses. Cambridge Local First has provided Zoom training sessions on relief opportunities, regulation changes, and rent negotiation. As part of the Cambridge Small Business Advisory Committee, it provided input on a small business relief program to disburse $3.6 million to businesses in the city. The HSBA has partnered with the city to develop reopening guidelines that allow social distancing measures to be followed in storefronts with limited space.

On May 18, Massachusetts Governor Charlie D. Baker ’79 unveiled detailed plans for a phased reopening. Harvard Square businesses cast their doubts. Hovagimian says that in order to have considered reopening under the state’s restrictions, she would have had to hire more employees and make room for social distancing in her hole-in-the-wall café, which she could not do or afford. Ned R. Hinkle, creative director of the Brattle, sees an “extended intermission” for theaters. He couldn’t say how the theater might reopen, though he’s already mapped out how to seat moviegoers six feet apart in his art house.

And despite the cautious reopening, all business owners underscored an anxious uncertainty for their businesses in a post-pandemic Cambridge. Many are waiting for the University to decide whether or not the fall semester will be conducted remotely.

“Not every business is anxious to open, and not every person in the community is ready to start running to the nearest restaurant,” Jillson adds. “There’s a great deal of uncertainty around how people are going to respond to businesses reopening.”

Some offer a bleak vision. Saloniki Greek sandwich chain co-founder Jonathan Mendez — who now uses his closed 12 Dunster St. restaurant as a makeshift office — imagines a dystopian future for dine-ins. “People in Plexiglas cubes being interacted with, almost like prison movies,” he predicts. “They put the meal through the door…in my head, that’s what I see.”

Yet beyond the immediate post-pandemic anxiety, Skeadas hopes this crisis might have a long-term net gain for Harvard Square businesses. “This moment provides opportunity for expanded consciousness on what we call local, resilient economies,” she says.

The pandemic has highlighted both the vulnerability and the importance of Harvard Square’s small businesses — the businesses continuing to provide the community with hot meals, face masks, and entertainment at a time when larger chains have closed their doors. Skeadas hopes that as the economy reopens and pedestrians walk through the Square once again, residents will strengthen their support for the small businesses that have long defined Harvard Square.

“Because people are thinking more locally, it presents an opportunity for increased awareness of the importance of local consumption,” Skeadas adds. “And hopefully, we’ll see changing consumer habits that drive, in the long term, greater local economies.”