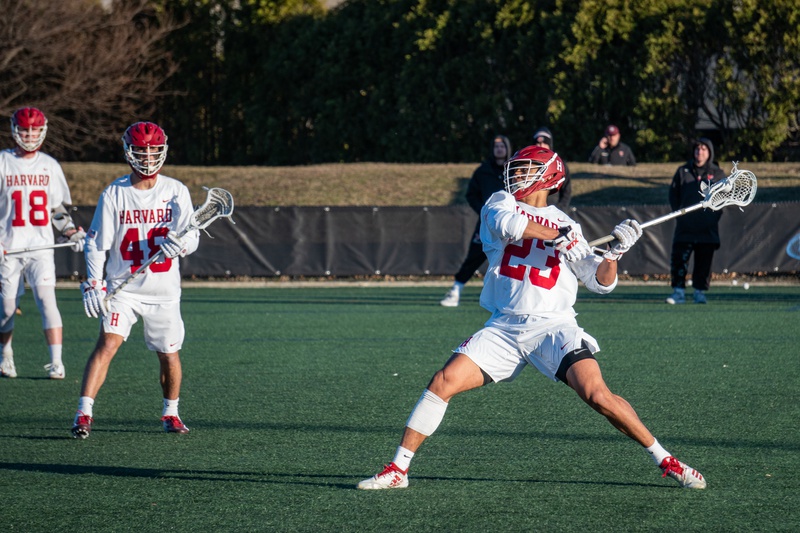 An around-the-world finish on a bullet of a feed from first-year midfielder Owen Gaffney to junior attackman Hayden Cheek set the tone for a week of decisive play by the men's lacrosse team as it toppled two ranked opponents, Michigan and Brown. The wins set up Harvard well for conference play, as the team enters the season with a 4-1 record.

The Crimson battled against The University of Michigan on Saturday, March 12. At the time of defeat, it was ranked no. 13 with a 7-0 record. Harvard came in with a sense of determination to prove itself, as the young team took on its second ranked opponent in almost two years.

The squad took control of the game as it made plays on both ends, playing a solid game all around the field. The attack was able to pick apart the Wolverine defense with coherent and connected sets. The offensive effectively drew the Michigan slides, which enabled them to move the ball quickly to open players as the defensive rotations were a step behind. Junior midfielder Nick Loring is a great example of this as he facilitated play with five assists and two goals. The veteran commented that the win came down to the team’s grit.

“It was a hard-fought, full team win. Our guys fought till the final whistle and made plays on both sides of the ball that allowed us to stay ahead for most of the game and hold off some of their runs. Obviously any time you’re playing a top-15, undefeated team you know it’s going to be a battle but I think we proved to ourselves that regardless of the opponent, we can play at a really high level,” he said.

Gaffney said that the team worked hard on cleaning up the offense. An emphasis in practice was on looking for the right, simple, play instead of forcing the ball.

“I think we were all motivated by our past three games, win or loss,” Gaffney said. “We knew what we could do as a team, and we just needed to prove it to ourselves. We obviously have much more to work on, but it was nice to get a win against a great team.”

Gaffney was particularly complimentary not only of his offensive unit, but of the defense as well.

“I think our defense played a great game. Michigan has a great offense, and our defense was really impressive in stopping them. Kyle Mullin really took charge and led our defense and team as a whole.”

The defense was strong on and off the ball as it solidly forced the Michigan team to stretch its field and was quick to talk through its slide packages. The unit was scrappy on ground balls and sent two or three to box out, a major change from the team’s last showing. This gave Harvard a much higher percentage of possessions, and set the team up for clean and quick clears.

The team won 14-9 after senior goalie Kyle Mullin saved two buzzer beater attempts by Michigan with about twenty seconds left on the clock. This shut-down mentality carried into their next game against no. 15 Brown, in which The Crimson won its first league contest of the season.

This past Saturday, The Crimson took on its first Ivy League competitor in its home game against Brown. Harvard built on a lot of what it did well against Michigan, but also had some areas in which the team needed to improve for later games.

An area to focus on would be the face off, as Harvard had difficulty winning that aspect of the game cleanly. The game against Michigan started off favoring the Wolverines until senior fogo Steven Cuccurullo was able to figure out how to get the ball out of the initial clamp in order to factor in the solid play of the wings, which was driven by a rotation of guys including sophomore lsm Greg Campisi and first-year defensive-middie Andrew O’Berry. The Brown game exposed this weakness despite Mullin and the defense warding off countless fast-break attempts. Harvard went 4 for 26, which is something that the team needs to work on in order to capitalize on possession time.

The defense, led by Mullin, who had 18 saves, did a phenomenal job locking down the players flying in for the fast break, and did a heads-up job of talking through these faster sets. The team excelled at communicating for the entirety of play, and forced Brown to play wider and sloppier than it had been. Harvard looked solid on ground balls and cleared really well.

The offense capitalized on its possession time and put in action the mantra of smart shots over volume of shots, like Gaffney noted after the Michigan game. Cheek was a standout, facilitating play on the offensive end with four goals.

“Our offense worked well off the ball. We found great opportunities and didn’t force shots," Cheek said. “We need to focus on clearing the ball as well as getting extra opportunities in special teams situations.”

Cheek is looking forward to the game on Tuesday, March 22nd in which Harvard will take on No. 12 Boston University on Jordan Field at 7 p.m.

“We are super excited about the opportunity to play another top 20 opponent in BU on Tuesday," he said. "I think we are playing at a high level right now but need to focus on ourselves and make sure we get better everyday.”

–Staff writer Katharine Forst can be reached at katharine.forst@thecrimson.com.