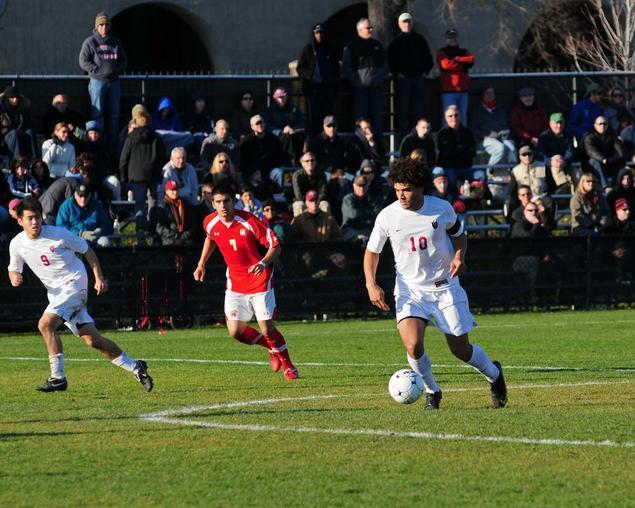 After breaking the men's soccer team's career points record, Andre Akpan '10 has gone on to an MLS career that recently took him to New York. By Richard F. Taylor
By Scott A. Sherman, Crimson Staff Writer

Andre Akpan ’10 has been given wings.

The former Harvard forward was traded to the New York Red Bulls for a conditional draft pick this week, bringing a four-year stint with the Colorado Rapids to an end.

“Andre is strong, physical forward with MLS experience and will provide another attacking option for our coaching staff,” Red Bulls sporting director Andy Roxburgh said in a statement. “We are pleased to sign him and look forward to his contributions in the coming season.”

Akpan was selected by the Rapids with the 22nd overall pick of the 2010 MLS SuperDraft following a senior season at Harvard in which he led his team to the NCAA Tournament’s Round of 16 and was the first runner up for the Hermann Trophy, given to the nation’s best player. The Currier House resident finished his Crimson career as the program’s all-time leading scorer with 127 points and tied Chris Ohiri ’64 for the most goals in Harvard history, with 47.

He made his professional debut in a U.S. Open Cup game against the Kansas City Wizards in April 2010 and scored his first career goal a year later against the Chicago Fire. Last season, Akpan tallied a career-high three goals in 15 appearances for Colorado. During his time with the Rapids, the forward won an MLS Cup in 2010 and also played on loan for Real Maryland and FC Tampa Bay.

“We would like to thank Andre for what he gave to the Rapids since coming to the team ahead of the 2010 season,” Rapids technical director Paul Bravo said in a statement. “He scored some good goals for us and was a positive presence in the locker room over the last couple seasons, and we wish him the very best in New York.”

The 2006 Ivy League Rookie of the Year and four-time first-team All-Ivy standout had only appeared in one game for the Rapids this year, appearing as a substitute in a March 2 game against FC Dallas. But on Twitter, he thanked the organization for giving him an opportunity.

“Just want to send a huge thank you to @ColoradoRapids and their fans. It's been a great 3.5 years, and I truly appreciated my time here,” Akpan tweeted. “Gonna miss a lot of ppl. I had some great experiences (winning MLS Cup wasn't too bad). Good luck to my boys this season.”

Akpan is not the first former Crimson star to change MLS teams this season. In January, Mike Fucito ’09 was traded from the Portland Timbers to the San Jose Earthquakes—his third time being dealt in a calendar year.