Around the Ivies: Awaiting a Plot Twist in an Otherwise Straightforward Sequel 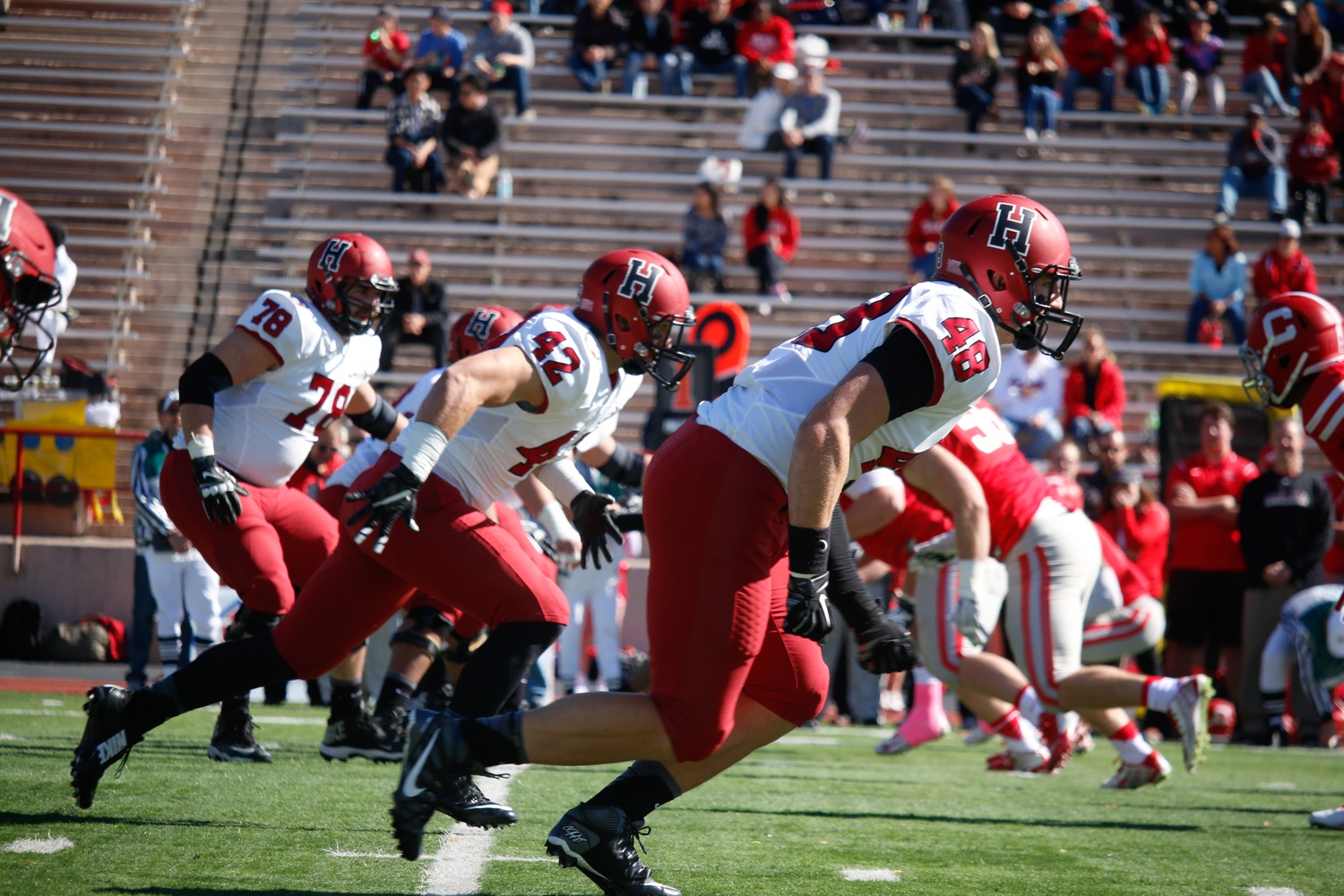 The Crimson, seen in action against Cornell on Oct. 10, look to get a second round of revenge against a Princeton squad that has proven difficult to handle recently in the first full weekend of Ivy action. By George J Lok
By David Steinbach, Crimson Staff Writer

Greetings, dear reader. Last we met, the 2014 Harvard football team was days away from its climactic showdown with Yale for all the marbles, an undefeated season hanging in the balance.

Much has transpired since. The Crimson sent the Elis home in defeat and captured an Ivy League championship. The team attained perfection for only the third time in the last century. And akin to Globo Gym dominating the competition of the American Dodgeball Association of America, Harvard has blazed its way to an unblemished record through the first five games of 2015.

Let’s think of this current season as a sequel to the 2014 campaign. I need not explain how movie sequels are often predictable. You often know exactly what you’re going to get when you walk into a theater to see the addendum to a moneymaking first rendition.

Take 22 Jump Street. Could that film have adhered any more closely to the plot of its predecessor? Or how about any of the Transformers sequels (somehow, there are three after the original). Did anyone actually enjoy (or even watch) those unsurprising remakes?

2014 was that chart-topping first hit for Harvard. How can you improve on an undefeated season and an Ivy League championship? Well, you can’t. But you can equal it by pulling off the same feat once more.

The Crimson is intent on making the 2015 season one of those straightforward, predictable sequels to the first moneymaker. It has certainly done a solid job thus far. Harvard’s first five wins have been decided by just over an average of 36 points per game, and the team’s starters haven’t once needed to play a contest from start to finish. That’s a pretty boring sequel if there ever was one.

But some sequels contain a twist. It’s always more fun when things play out in unpredictable fashion, right? Indeed, these are the very best kinds of remakes—the ones that keep you guessing.

For instance, moviegoers may have thought they were getting more of the same action-packed, original Star Wars when they ventured to see The Empire Strikes Back in 1980. But I recall there being a pretty significant plot twist toward the end that threw everyone for a loop.

By now, you probably have a rough understanding of the filmography I indulge in. But that’s not what I’m trying to convey here. Through five games this year, Harvard football is in the same position as it was in 2014—with five wins. So far, the sequel to that championship run has adhered to a predictable script of dominance. But things often change quickly in the Ancient Eight (irony intended).

Will Harvard march to a repeat championship without suspense or drama? Or will the 2015 season contain some type of plot twist, as the great sequels often do? The Crimson suits up against a pair of opponents at home over the next two weeks—Princeton and Dartmouth—that are of a decidedly different caliber than the weaker competition the team has faced so far this year. If there’s ever a time for a classic sequel twist, it’s now.

You may think you know what will transpire, but you don’t. Another Ivy League stretch run begins on Saturday. Welcome back.

Nice. It’s been a while since I last made these predictions, so I appreciate the opportunity to get warmed up with a game that will likely bear no consequences for the rest of the Ivy League. The Crimson football beat braved the trek to Ithaca two weekends ago to see Harvard coast to a 40-3 victory over the Big Red. The most enjoyable part of the trip for me was undoubtedly the stop at Collegetown Bagels on campus where, in case you’re wondering, they serve a mean smoked salmon sandwich. Beyond that, there’s not much to see in Ithaca. Likewise with this game.

Prior to the start of this season, Dartmouth introduced into its football practices a new MVP. Stay calm, Dalyn Williams. The Most Valuable Player award still belongs to you. I am here referring to a Mobile Virtual Player, a 5’11”, 200-pound robotic dummy for human players to tackle during practice. Not only are the robots indestructible, but they apparently can run a 4.8-second 40-yard-dash. Great idea, Dartmouth. Let’s build something big, strong, and fast that can’t be subdued by human force. Speaking of my movie theme, anyone remember iRobot? I’m not the only one raising an eyebrow at this, right? (Well, Stephen Colbert successfully tackled one robot, so maybe it’s not all that tough.)

Oddly enough, Dartmouth itself has morphed into a machine over the course of the 2015 campaign, rolling over each of its five opponents thus far. Lowly Columbia merely represents a tune-up for the Big Green before the high stakes showdown with Harvard next Saturday in Cambridge.

This will likely be the most competitive conference game of the weekend. The one-loss Elis, who may still be reeling from the departure of running back Tyler Varga ’15, are at risk of falling out of contention in the Ivy League title race. Penn, meanwhile, has scored 40-plus points in consecutive weeks for the first time since 2007. Look for the Bulldogs to come together in this must-win situation and pull out a gutsy W in Philadelphia.

I remember where I was when I learned Princeton scored 29 unanswered fourth quarter points to shock Harvard in 2012. I remember where I was the next year (in the press box; that one’s easy) when the Tigers outlasted the Crimson in triple-overtime. Harvard finally had its revenge last year, though, dominating Princeton by 42 points in New Jersey. For once, our game stories weren’t frantically revised at the last minute. It won’t be as much of a Harvard rout this year, but the contest will likely be out of reach by the middle of the fourth quarter.

–Staff writer David Steinbach can be reached at dsteinbach@college.harvard.edu.