On deciding what Art is and who gets to decide 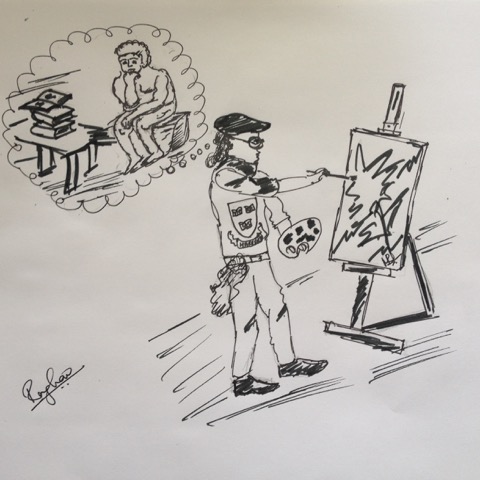 It’s a Saturday night in Kenmore Square. The sky, hazy and overcast, dulls the neon bar signs brightening the street. I’m shivering and so are the bouncers in front of me. When it comes time to show them my ID, one frowns. “You’re not 21?” he asks, confused. I sigh, then stutter, and quickly tell him about my hour-long ride on the green line, about the Harpoon bottles littering the train, the lost European tourists looking for Time Square, the sticky residue. I tell him that I’m here to learn, that anecdotes are valuable. He shrugs—from empathy or boredom, perhaps—and slaps a red band across my wrist. I enter the House of Blues.

I’m here, but it’s clear that I’m not, really. Or at least, that I shouldn’t be. I can’t quite tell what is Art and what isn’t, who’s an Artist and who’s in the audience. I don’t know if the show has started, if there was a show that needed starting to begin with.

I see a mounted painting of Marvin Gaye, one of a grinning devil with crooked teeth, another of the American flag sans stars. A large disco ball surrounded by glittery miniature replicas looms from the ceiling. Strobe lights bounce off the walls. People are chatting and sipping, walking and laughing. There is talk of “the cosmos.” Someone likens the electro-undertones to the “sound of planets being discovered.” A gray-haired lady—clutching a canvas bag imprinted “Feed Your Mind”—faces the young girl holding her hand. “Art is difficult to narrate,” she says, nodding her head.

I nod along. There’s a certain feeling I get eavesdropping on these folks in flannel and the occasional leather jacket. It’s the understanding that I don’t know why the metal rhinoceros hanging above me is Art, don’t know how to sound like I know why it might be.

It’s a strange feeling, a hurried kind of breathing, a deep longing to belong tinged, ever so slightly, with revulsion. It’s the feeling I get when I walk in and around certain spaces here—yellow buildings, rooms filled with smoke blown in bewildered faces from puffing New Yorker-bound-demigods, cheap wine spilt amidst fraying copies of Eliot’s “juvenilia.” Mailer’s, too.

It’s a feeling I’m not too keen on feeling, so I leave after snapping a few pictures of a curtain labeled “Perception in Flux.”

My T.F. groans, straining under the weight of the desk he hoists into the trunk of his rented truck, where a rocking chair rests. Its mahogany hue is fading, its front leg missing. Scattered on the floor alongside it are battered books with torn pages, patches of artificial turf stripped from Harvard’s football field.

My VES class often takes trips like this, and I’m still getting used to it. I haven’t quite gotten the hang of talking about Art for three hours straight, either. “Of course this isn’t for you,” I often think when discussion turns to Judith Butler and Identity, to Rosalind Krauss and The Sublime. “Maybe? No. Hah! Not quite but almost,” I usually decide.

I’m struggling, fam, I tell my professor one day as we leave studio. I’m struggling to decide what Art is and who gets to decide on this campus, if those in the yellow building—those with the Pegasus totes—do. If they should, even. If Renegade can. If we ever will. If we already are.

She takes a long drag from her cigarette and frowns. She tells me about her friends back home in Germany who don’t agree with her belief that, if an Artist’s sculpture is shipped to the moon, it’s still Art. They say Art requires validation from others, she exhales. “But I like to think my Art can exist without that.”

Sometimes, I wonder how silly we must look. The grad-student-architect with twelve-foot rods. The VES-thesising-senior sifting through dust. The composer-turned-Ph.D. creating an organ from a broken piano and even more broken fans. And the brown girl in the corner, rocking back and forth in a creaking chair, over there; the one without a portfolio, the one who can’t weld or tell you the difference between a matte or flat finish; the one in a paint-covered smock who hopes the splash of “Encore Teal” on her elbows and scarf is Art enough.