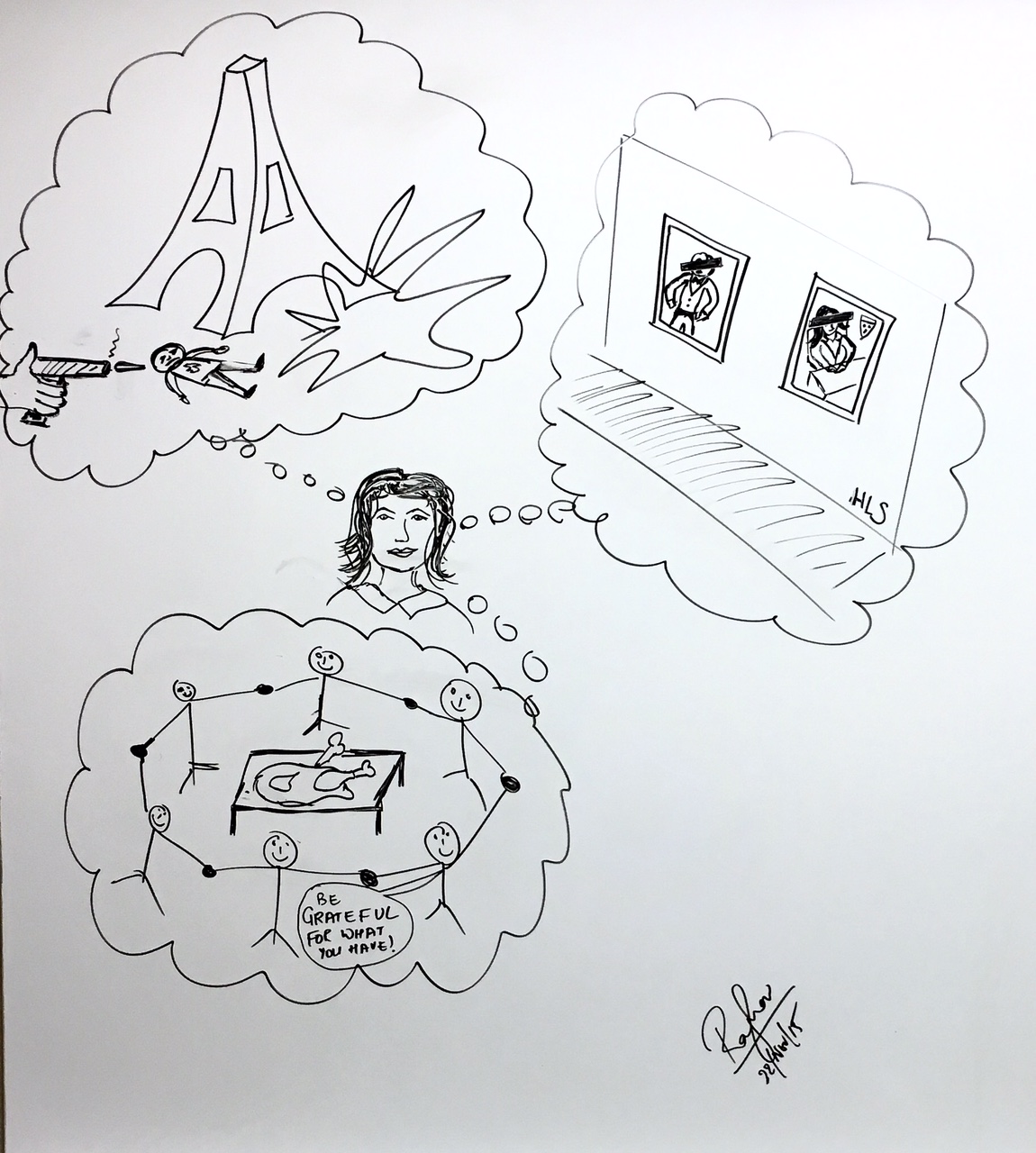 I didn’t travel to New Haven in a “lit” shuttle this weekend. Instead, a few friends and I ordered Thai and sat in a circle on a fraying rug in their suite. We listened to Fleet Foxes as we picked around at noodles and egg rolls, spilling some soy sauce here, there, and mostly everywhere.

We talked a lot about our first impressions of each other, about how and when cordial friendship gave way to a sisterly kind of intimacy. Occasionally, we checked Facebook for updates about the Game, looking with vague interest at the flushed faces of our peers decked out in Crimson gear appearing, one after the other, in our newsfeeds. After a couple of hours had passed, we returned to our respectful positions: One friend lay sprawled on a futon with a book on her lap and her legs extended straight in the air, reaching for the ceiling. Another sat at her desk, pounding the keys on her Mac at a furious, frantic pace while tapping a heel and whistling. I put on my headphones and began to write this column, looking around the room, every so often, for inspiration. And that’s how we remained for the next few hours: in silence but surrounded by peripheral sounds.

I should have felt lonely, but I didn’t. I felt something like comfort. Safety. Contentment.

This feeling is exacerbated by tragedy and straight racism, by the sinking realization that the tragedy is linked to people who claim to share my religion, and the racism is lurking near.

I’m talking about the Beirut bombings and the Paris attacks and the Muslim woman in Toronto who was punched in the stomach, called a “terrorist,” and robbed of her money, a scarf, and any sense of security.

I’m talking about a Muslim friend’s harrowing Snapchat story—a black backdrop with the caption: “No room in my schedule to cry.” And another Muslim friend’s status lamenting the Islamaphobes who violently interrupted a meeting at her hometown mosque in Virginia.

I’m talking about the Yale email and the cries of “coddled liberal students” that followed it, and the hate crimes at HLS that seemed to validate its Royall legacy.

I’m talking about a fellow Crimson columnist’s Facebook post about her SLS professor’s last lecture on how black students are genetically inferior. And another columnist’s explanation of why she has become, and remains, a Tired Old Queen.

The utilitarian in me worries that these statuses and posts and columns become trite after a while. They’re all expressions of an exhaustion that we inherit like a stubborn chromosome and will probably pass down, in turn, to our children. And while the same few share our work and like them and reflect on them, the rest still whisper about us damned SJWs in dining halls and raise their hands in seminar to bullshit a comment about intersectionality as if the term is an abstraction meant to validate one’s intellect than a facet of someone’s identity.

So, what’s the point?

“So we came
And Harvard knew
All we came for
Was what was due
Our forty acres
And that mule.”
—Fred D. Smith ’73, Harvard College 1973 Yearbook

“As a black student and person, I have learned that Harvard is a place of survival more than sublimity.”
— Abraham Penn Jones ’74, Harvard College 1974 Yearbook

“Set my teeth on edge
The Empire is dead
The colonies dying
As my song toasts
Them on my see—saw-see—saw
Moving between my selves uneven
I am all these made woman.”
—Anonymous, Of Woven Strands, 1985

“I like to spell ‘Asian American’ without a hyphen. Hyphenated, 'Asian-American' implies a conflict between equal halves. With the removal of the hyphen, the term becomes a base noun with a modifier instead of a compound noun; the ‘Asian’ part is made subordinate to the ‘American’. I feel that this point of grammar is worth fussing about, for Asian American history and literature has been dominated by an overblown perception of ‘alienness.’ By reading, we are able to learn the hyphenated past of mistaken identity, but only through writing, can we begin to envision a different future.”—Julie Koo, “Word Warriors: The Text and Asian American Identity,” Of Woven Strands, 1985

For his journalism workshop, an acquaintance is writing about the Muslim experience at Harvard. He asks to interview me. We grab trays stacked with various food groups—bowls of Marshmallow Maties and soup and spaghetti steeped in sauce, plates of grilled chicken and cucumbers and waffles—minutes before the dining hall closes.

I swirl my spoon around in circles as he asks questions.

“Is your Muslim identity ever at odds with your South Asian one? Have you ever faced discrimination, either by peers or professors, following terrorist attacks? Have you ever had to explain the actions of ISIS to your friends?”

I stop him with a raised hand and feel the urge to loudly scream, shattering the glass barriers separating the upper level of Pfoho’s dhall from the bottom. He blinks in response.

I exhale, my voice softer than I intend, barely audible, belying a kind of dull ache that had, for so long, throbbed.

He writes my comment down, dutiful reporter that he is. And I write comments down, too, after he leaves, filling the margins of my comp lit notebook with shitty verses better suited for my angsty middle school days.

“Instead of taking a dose of this / Or popping a pill of that / You tell me to search within/And I’ll find something worth looking at.”

After she got famous for reporting on hippies in San Francisco, Joan Didion wrote an essay called, “Why I Write." It’s self-reflexive, as one might expect. She stole the title from George Orwell, and the reason for her theft, she explains, is the assonance. “There you have three short unambiguous words that share a sound.” The sound they share, she continues, is “the act of saying ‘I.'”

My mom is a selfless person by nature and a doctor by practice. The act of saying "I" or focusing on herself seems contrarian at best and heinous at worst. When she realized that I wasn’t going to be pre-med—that literature fulfilled me more than bio or chem—she wrapped me in her arms. “Write as if you’re saving someone’s life,” she said.

Ask me why I write and I’ll tell you that I write to find out what I’m thinking, to release and expunge feelings, to find what it is that I see in my head—what I want, what I fear. I don’t intuitively think about a "you" or a "they," or even a "we." Maybe, I’m beginning to realize, it’s okay that I write to save only a single life, that I write to save my own.