Game of the Year, Runner-Up: Men's Volleyball vs. George Mason 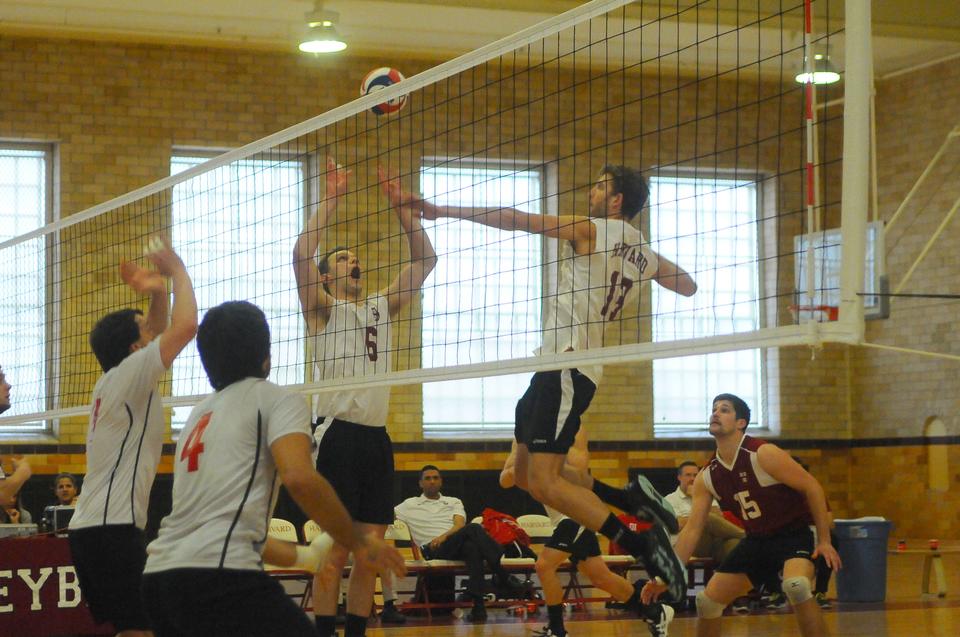 Led by sophomore outside hitter DJ White, who had a team-best 239 kills in 2013, the Harvard men’s volleyball team finished with an 18-9 record on the season, highlighted by an upset of No. 9 Penn State. By Nzuekoh N. Nchinda
By Peter G. Cornick, Crimson Staff Writer

It only took a second for the ball to fly over the net and hit the floor, but it was a moment years in the making. When sophomore middle hitter Caleb Zimmick’s serve went untouched, history was made. The Harvard men’s volleyball team had fought back from the brink of elimination to earn the program’s first playoff win in a thrilling five-set overtime match against EIVA rival George Mason.

And while most eyes were following the Crimson’s March Madness success, Harvard’s other team that plays with nets on the hardwood quietly put together the best season in the team’s history, taking another step for the program after reaching the playoffs for the first time last season.

“It was really good to show this season that we belong in the upper echelon of this league,” co-captain Rob Lothman said. “We were not a one-year wonder last year. We are a team that has got staying power and we are going to continually be there.”

The Crimson tied a program-best for wins on the season with 18. Zimmick, a second-team All-EIVA player, led the conference with a .374 kill percentage. Fellow sophomore outside hitter DJ White sat just behind Zimmick with a .314 kill percentage and earned the team’s sole spot on the all-conference first team.

Co-captains Lothman and junior outside hitter Nick Madden also served as motors of the offense, with Madden leading Harvard with 249 kills on the year. Lothman ranked third in the league in assists and earned All-EIVA academic honors while joining Zimmick and junior middle blocker Kyle Rehkemper on the All-EIVA second team.

The playoff win over the Patriots was not the program’s only “first” of the season. After two seasons of forcing five-set matches, including a Jan. 26 loss, the Crimson finally took down perennial EIVA champion Penn State with a convincing 3-0 victory at the Malkin Athletic Center. White, who missed the first meeting with the Nittany Lions due to injury, returned to notch a game-high 13 kills.

The win ended Penn State’s 51-game conference win streak that had lasted nearly five years while propelling Harvard to three more sweeps of conference opponents throughout the next two weekends of play.

But the momentum did not last, as the Crimson dropped two road matches to George Mason and Princeton before a month-long break from conference play. During that time, the team took its spring break trip to California to take on some of the country’s top teams. For the 2012 squad, successes over established programs like No. 8 Cal Baptist and No. 14 Cal-State Northridge propelled Harvard into the national spotlight and the team’s first NCAA ranking.

But the 2013 spring break trip proved less fruitful, as the Crimson was swept by UC Santa Barbara, Cal Baptist, and Concordia.

“It was a wake-up call,” Madden said. “A lot of guys, including me, were pretty proud of ourselves, and you cannot let pride take ahold of you in the middle of the season. Getting slapped around a little bit in California was very good for us in getting motivated. Coming back, we were crisp, sharp, and ready to take it into the playoffs.”

The squad went 5-1 the rest of the way to take the third seed in the playoffs, setting up a faceoff with the Patriots, the only team to beat Harvard twice during the season.

George Mason seemed ready to move on in the playoffs, taking a commanding 25-17 victory in the third set. But Harvard persevered, tying the score and getting clutch hits from Zimmick and others in overtime to take the fifth set, 19-17.

After the Nittany Lions took down Princeton in the other semi, the Crimson took the confidence gained from their earlier victory against Penn State into the team’s first EIVA championship game. But Harvard could not pull off the upset twice, falling in straight sets as Penn State won its 15th straight EIVA championship.

Lothman believes just being in the game was a big moment for the program.

“I never thought four years ago, even three years ago, our program would be in place to compete for an NCAA tournament berth,” the senior setter said. “So to get there this year and take that small step after our big step last year is huge.”

Looking forward, Lothman is hopeful for the future.

“We’re waiting for another big step, to get that Final Four berth,” he said. “I think it’s going to happen within the next couple of years. This year, we showed that we are there, we’re going to compete for it, and we belong there.”