With Bomb Threat, Echoes of Paris and Eldo Kim 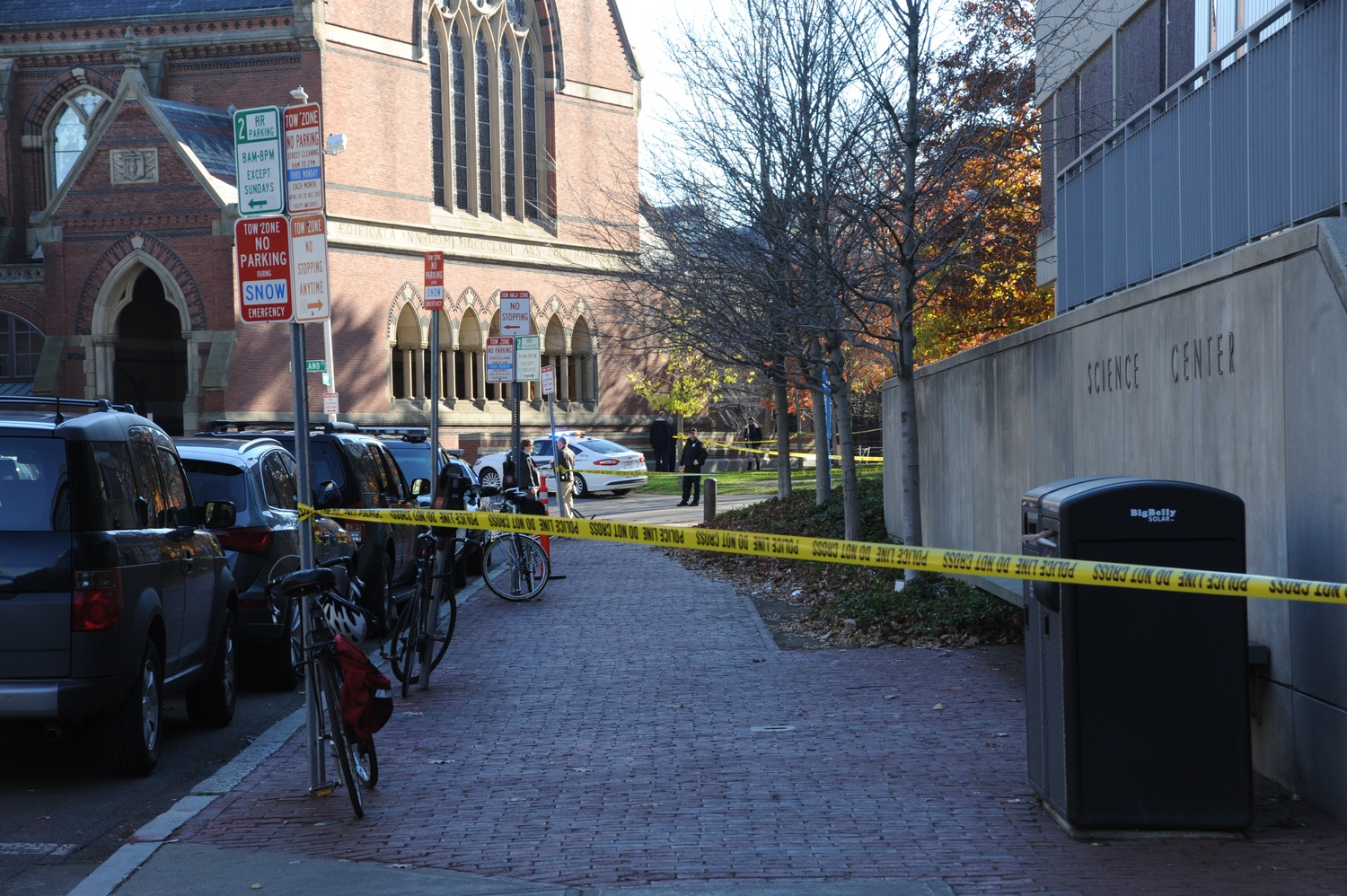 Two years ago, in the middle of December 2013 final exams, Harvard students received an unsettling email from University Executive Vice President Katherine N. Lapp detailing “an unconfirmed report that explosives may have been placed in four buildings on campus: the Science Center, and Thayer, Sever and Emerson halls.”

On Monday, Lapp sent another message: There was again an “unconfirmed bomb threat” in those four campus building; meanwhile, a swarm of law enforcement officials were combing through the same classrooms and common rooms in search of explosives.

In both cases, police deemed all four buildings safe following an investigation.

The eerie familiarity of the threat, together with the recency of fatal bombings in Paris and Beirut, imbued the series of evacuations and investigations on Monday with particular weight for some students.

“I tried to say to myself that it was likely a fake,” said Anna Lea Albright ’17. “But in the wake of the Paris attacks everything has a different seriousness.”

And some students, particularly juniors and seniors, recalled a day in 2013—when then-sophomore Eldo Kim sent Harvard officials an emailed bomb threat—with particular clarity on Monday as similar events unfolded throughout the afternoon. Kim’s bomb threat, which he later confessed was an attempt to skip a final exam, resulted in evacuations of the Yard and canceled examinations.

After evacuating the Science Center on Monday, Tiphanie C. Fuentes ’16 and several friends regrouped in a nearby cafe. One friend dug up emergency messages from 2013 and compared them to those sent that afternoon. When Fuentes saw them, she said she thought, “Oh my God, it’s really happening again?”

Later in the afternoon, while she waited in the cafe for updates on the bomb threat investigation, Fuentes recalled the 2013 story to one of her sophomore friends who had not been a College student at the time.

And though many classes in the Yard were canceled while law enforcement officials conducted their search, Philip J. Abboud ’17 said he thought the bomb threat Monday drew a “less concerned” response from Harvard officials than did the 2013 threat. While the investigation lasted hours into Monday afternoon, some buildings reopened to students and faculty and many classes scheduled to take place were not altered. Once Sever and Emerson Halls were deemed safe, Leslie A. Kirwan ’79, the Faculty of Arts and Sciences’ dean for administration and finance, sent an email to FAS affiliates encouraging professors to continue classes as normal.

“[I]n the interest of minimizing the need to reschedule classes, faculty and/or TFs who have classes or sections in Sever and Emerson are encouraged to hold them if possible,” she wrote.

Still, though, the recent attacks in Paris and Beirut—which left scores dead—evoked a more somber tone to Monday’s attacks for some Harvard students, faculty, and administrators.

“In the wake of recent tragic events in locations ranging from Paris to Beirut and beyond, we understand that this type of threat will cause great anxiety for many across our campuses,” Lapp wrote in her initial email to Harvard affiliates.

Even for some students who were skeptical of an actual bomb threat, the recent events made Monday’s evacuations feel more legitimate.

“The events in Paris and Beirut showed that there really is almost nowhere left that is totally safe,” Abboud said. “It’s worrying that something like that could happen in our own backyard.”

“Paris was very much on my mind,” said Gordon, who specializes in European History. “I even mentioned it at the start of my lecture and meant to return to it at the end of the lecture.”

Astronomy professor Jonathan E. Grindlay, who had to cancel his class, Science of the Physical Universe 21: “Stellar Understanding of the Cosmos,” said it was “disappointing” that a bomb threat disrupted campus, especially in the wake of the Paris attacks.

“It was really frustrating,” Grindlay said, “that we had to have an aftershock, let's call it that, of all the horrible events that occurred in Paris.”