Obama Portraits Ask: Where Are You Coming From? And Where Do You Want to Go? 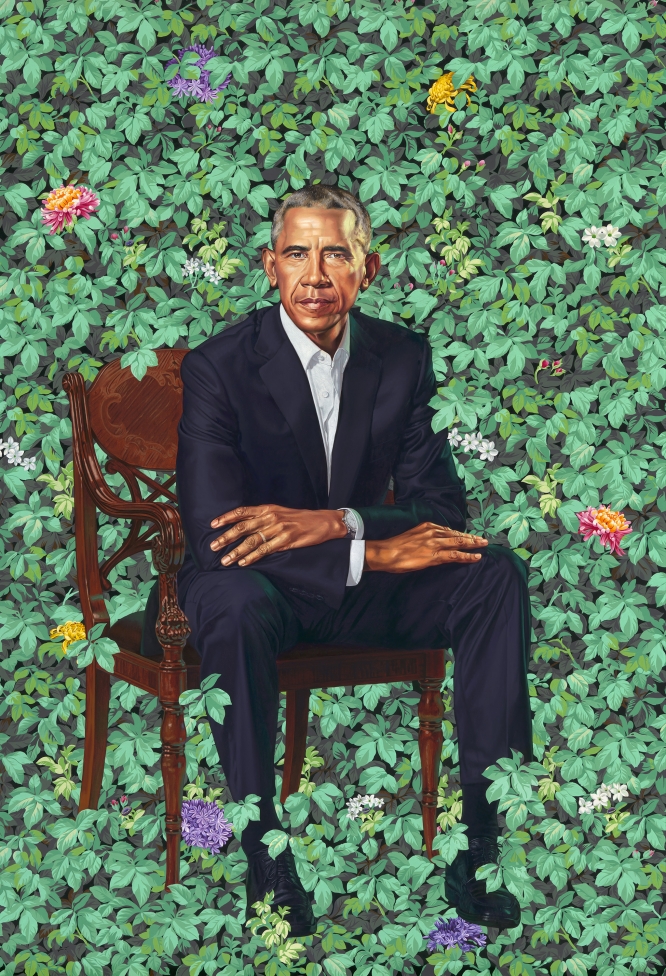 In many words, the Obama portraits are: colorful; biting; intensely glowing with jewel-tones or popping with pale hues; history in the making; the kind of art that screams iconic; the kind of art that I want to see reproduced en masse, on mugs and laptop stickers and posters hanging in every common room on campus; the kind of art that visitors to the National Portrait Gallery are going to flock to, while other “traditional” presidential portraits quietly take their place on the sidelines.

In one word, the Obama portraits are: cool, as Vox aptly pointed out in their own analysis of the pieces. They’re representative of a changing landscape, reflective of the kind of 21st century connection the first black presidential couple has struck with newer generations, through memes and tweets and screenshots dispersed across the world-wide web by the newest generations.

In Kehinde Wiley’s portrait of Barack Obama, flowers dot the foliage Barack Obama nestles in. One quick Google search about the painting’s botany reveals the African blue lily is for his father’s birthplace (Kenya), the chrysanthemum for Barack Obama’s political beginnings (Chicago), and the jasmine for his own birthplace (Hawaii). It’s the kind of symbolism that purposefully stands out. Wiley’s portrait calls attention to Barack Obama’s roots, melding them into the foreground, petals shining proudly under bright light.

It’s difficult to articulate exactly why this is so affirming to people of color, and I don’t want to force my experiences upon anyone else’s. But in short, whiteness has always been America’s cultural standard. You see it dominate TV screens and advertising campaigns. You see the first black president’s legitimacy being questioned—supposedly over a birth certificate. We’re supposed to find whiteness beautiful and powerful—something we should aspire to. As a result, this landscape expects people of color to feel shame for being anything else.

And even when mainstream media does acknowledge that people of color exist, it’s often done in a way that’s reductive, condescending, and “other”-ing, as if a non-white American existence is impossible, as if multiplicity can’t exist in a person’s origins, as if we’re supposed to disregard some part of our identity in order to validate our “Americanness.” But Wiley’s flowers mean feeling pride and respect for heritage without stereotyping or exoticism.

Wiley’s portrait subverts that mainstream expectation. His work is already known for having ornate backgrounds, and this painting is no exception. Everything is lush and bold and teeming with life. The shrubbery crawls around the legs of Barack Obama’s chair and feet in a way that doesn’t feel threatening, but empowering—like the leaves and roots and the flowers representative of Obama’s multiple beginnings are trying to protect and uplift his seat in some way. It’s almost as if they’re saying: “These are the places you’re made of. Now, what are you going to do?” 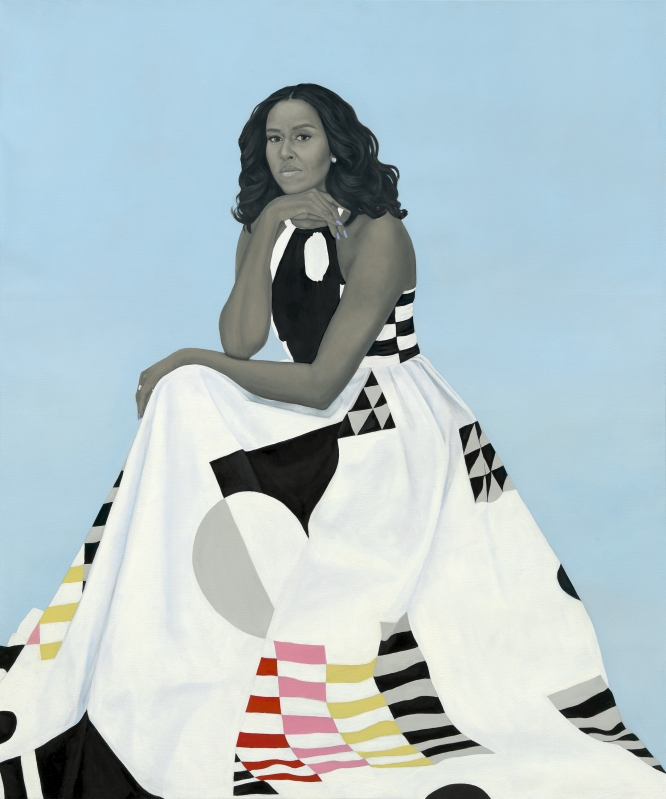 Sherald’s painting feels undeniably contemporary, with clean lines and cool tones. Michelle Obama’s dress flows, encapsulating nearly half of the canvas in its own regality. The designer of the gown—Michelle Smith of the label Milly—told Vogue that the dress exists “without a reference to anything past or nostalgic.” It uses a “clean, minimal, geometric print” to give the outfit a “very forward-thinking sensibility.” She added that this was something “very Michelle Obama.”

This diverges slightly from Sherald’s own interpretation (at the unveiling, Sherald mentioned that the gown reminds her of the quilting skills of Gee’s Bend, an Alabama-based black community), but not entirely. Sherald also alluded to Piet Mondrian when thinking about the dress’s geometric pattern. Mondrian was a 20th-century Dutch painter who innovated the field of abstract art, relying on large blocks of bolded colors for his style. His work has come to symbolize Modernism, an artistic genre that’s bent on breaking outdated traditions. Does that sound familiar?

I hope so, because the Obama portraits are like the Obamas’ political legacy: something of a whirlwind of political and social reckonings, something that wants us to be proud of our own “roots,” something that tells us we can go anywhere—despite what we might be told otherwise. The portraits aren’t demanding us to claim some sort of identity from heritage, and they aren’t demanding we do some kind of work from that either. All of that is up to you. But they ask us to acknowledge who we are and what we can do—even if it’s just for a brief moment, a cursory glance in a museum.