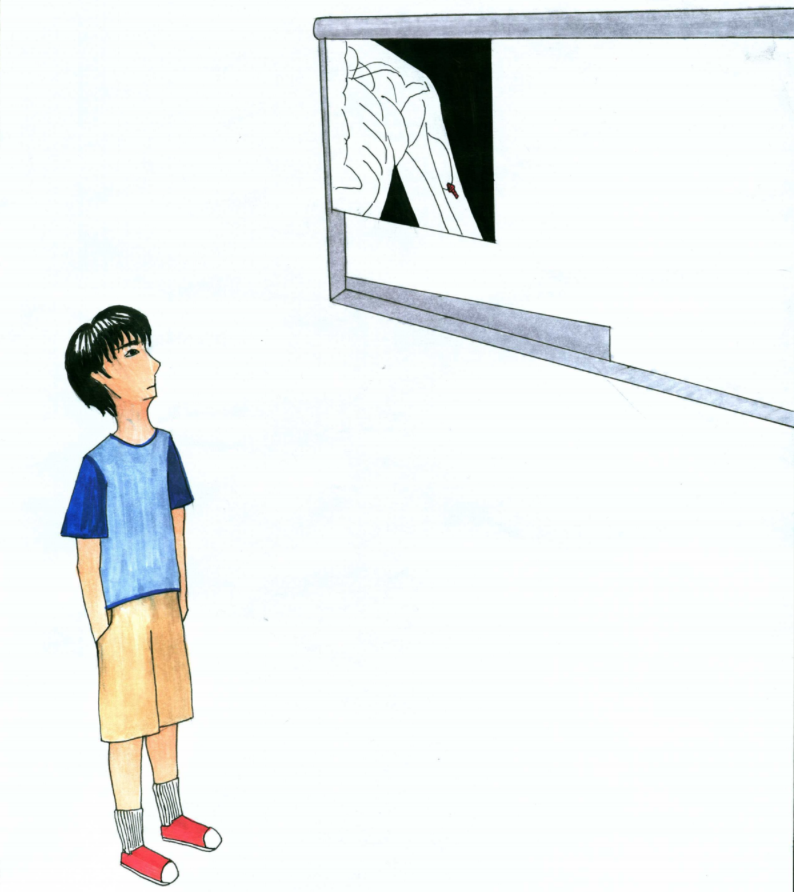 That was the first time of many times someone thought something was wrong with me, and the experience was more physical than mental. My face burned, which was shame. My stomach felt heavy, which was worry. And then my heart tightened, which was it preparing its defenses for the next time.
By Andrew W. Badinelli

When I am at my most mindless, I put my right thumb underneath my left bicep, nearing but not quite in the armpit, and massage it, counter-clockwise. It is a calming ritual, relieving tension more mental than physical, even if every rotation feels like late-night food and scattered four-day gym resolutions and pallid skin untouched by the sun.

There was a time when I could feel a hard round lump there, as if the one that was supposed to be in my throat had gotten its street directions wrong and figured, hey, this is as good a stop as any. If I concentrate really hard, I can still feel my mom’s fingers there when I first showed it to her at 10 years old. Tight and sharp like hooks because my mom never does anything halfway, but tentative, too, because she didn’t know exactly what she was getting into. Like a child going pole fishing for the first time.

At first, my mom’s fingers were down low closer to my elbow, but I said no no no! Mom the Arm Lump is further up by my armpit, right across from my heart. Still tight and still sharp, her fingers crept slowly up my arm, leaving pink circles behind them until I got impatient and grabbed her hand with my free one and placed it for her. My mom’s fingers closed briefly around the Arm Lump beneath my skin before recoiling all at once.

That’s when she shrieked. She didn’t yell (obviously, because a yell is halfway to a shriek); she shrieked, and the spoon she had probably just used to stir coffee clattered against the kitchen floor. She asked how the Arm Lump felt when she touched it, and I said it didn’t hurt, and then she twisted my arm to get a better look at the spot, which I said did hurt. She started smoothing over the area, as if wiping the spot where the Arm Lump was concealed was going to get rid of it.

That was the first time of many times someone thought something was wrong with me, and the experience was more physical than mental. My face burned, which was shame. My stomach felt heavy, which was worry. And then my heart tightened, which was it preparing its defenses for the next time. I wonder if those feelings came more from someone pointing out my deficiency or me being anxious about what it was, exactly, and how I could fix it. I wonder how my face and stomach and heart would have responded if my mom had been two-faced about the Arm Lump, if she had shrugged her shoulders and said no big deal, then scurried off to call a doctor.

Over the next few weeks, Arm Lump got upgraded to Bone Tumor, which is a much more serious label because no one puts colorful ribbon-shaped magnets on the back of their minivans to raise awareness for Arm Lumps. But each of the doctors we visited—what felt like dozens, but must have been two or three—shrugged when my parents asked for a diagnosis, and sent us on to the next one.

When it came to understanding my situation, my body was no help to me, because my tumor was not a wound that bled or hurt or swelled—those trademark signs of injury that nature hardwires our brains to recognize from a young age. So instead, I took cues from my parents, staring at them from my seat atop the crinkly and easily-torn paper that covered the examination table. With each doctor’s shrug, I watched my parents’ bodies deflate, like they had let out a sigh but forgotten to breathe back in. I would have preferred bleeding.

The doctors near home referred us to a doctor in New York City, which relieved some of my worry once my parents assured me The City was filled with good doctors. This doctor called my Bone Tumor a fancy word that I remember at one point practicing to spell, and then said it “probably” wouldn’t develop into cancer, which was both more and less confident than it could have been. He didn’t recoil or shriek when his fingers met the Bone Tumor, which I appreciated, but then he turned to my parents and said “Yes, I can cut that right out,” which I did not appreciate. My dad asked if that was the best and only option, and the doctor said yes and that we could schedule the procedure with his assistant out front. My parents thanked him politely and we escaped, disturbed by his eager willingness to cut a hole in my arm.

One night of some day after that visit, I left my room after bedtime because I wanted to stay up, but I went to get a cup of water from the kitchen because when you’re under questioning from your parents “I’m out of bed because I’m thirsty” is a much better excuse for being out of bed than “I’m out of bed because I want to stay up so I decided just to go for it.” Kids are crafty like that. When I got to the kitchen, it was dark except for the blueish light that shone from the desktop computer, illuminating my dad’s face as he hunched over the keyboard.

Instead of going to get the water, I climbed into his lap, and saw that he was researching that word the doctor had called my Bone Tumor. His worry made me worry, and I asked him if I was going to die. He looked me in the face then, and said “You are not going to die.” He kept googling, though, so I didn’t totally believe him. I thought of the history books I had read in which kids died at a young age and how that wasn’t supposed to happen anymore.

I wonder if he found comfort in that googling, or if anyone finds any comfort when we google a medical condition or something we ingested, always tacking on an “ok” at the end—no capitals, no question mark. Like “Advil and alcohol ok” or “lactose intolerant but had milk ok” or “Advil and alcohol three days in a row ok.” I imagine my dad’s google search looking like “my young son has a bone tumor also he seems to be very thirsty almost every night after bedtime ok.”

Years later, my dad mentioned this computer moment to me during an otherwise quiet car ride. He told me that after I left the kitchen he went to his room and laid there and cried. I told him that I had gone to my room and cried, too.

Eventually, my parents took me to see a specialist at Yale, despite New York City being filled with good doctors; fooled twice, shame, etc. This doctor reminded me of Santa even though he didn’t have a beard or a big belly—he just seemed like he would know what I wanted for Christmas if I asked him to guess, you know? His too-blue eyes made me glance sidelong with impatience and discomfort, as he was one of those adults who insisted on prolonged direct eye contact—“Andrew? Andrew. Andrew.”— which is second only to public speaking in the pantheon of living nightmares for a kid with anxiety.

He examined the Bone Tumor and looked at my x-ray and read my chart but didn’t shrug. Instead, he smiled. He had seen this type of tumor before—they very rarely developed into cancer, and almost never needed surgery unless they hurt or prevented normal range of motion. As I grew older, muscles and sinew would coil around the tumor until it disappeared from sight or touch and my body forgot it was ever there at all. I looked to my parents for a cue on how to react. They stood there, fully-inflated and crying, but in the good way.

Then, my doctor leaned-in (not in the high-income feminist way) because people always lean-in before moments of profundity.

I was not doing to die.