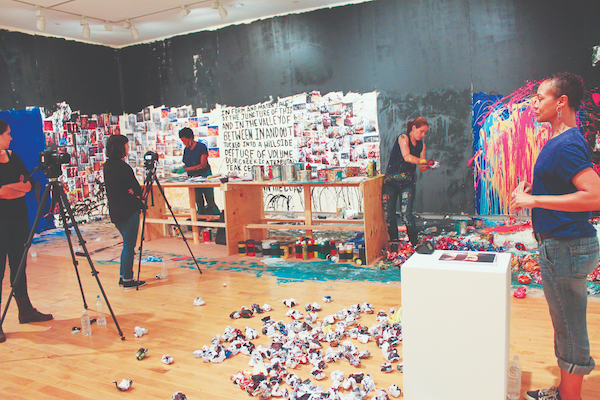 In a six-hour program entitled “Malleable Forms — Define Abolition,” visiting lecturer Xaviera Simmons set out to challenge social and racial norms through art. Held in the Annex of the Arthur M. Sackler Building on Nov. 6, the participatory experience incorporated film screenings, group activities, and talks by students and guest speakers.

According to an online description, the event explored the “undoing of ‘whiteness’ in its many forms” through analysis of systemic racism and the American carceral system. Simmons, the Department of Art, Film, and Visual Studies’ inaugural Solomon Fellow, has previously explored race relations and inequality in her interdisciplinary work, including photography, sculpture, and multimedia installations.

“There is simply no way that I can work in one medium and be fulfilled as an artist. Period!” she said in a 2014 interview with Caroline Picard for the David Castillo Gallery.

In her opening statement for the program, Simmons spoke about the struggles of people of color in contemporary America, citing a 2017 Boston Globe survey in which 54 percent of African Americans rated Boston as “unwelcoming” to people of color. She then discussed the inseparability of the United States’ current power imbalance and its long colonial history, describing systemic inequality as a “sensational, heartbreaking problem.” Among the injustices she named were the appropriation of Native lands, the persistent racial wage gap, and the frequent human rights violations in the U.S. prison system. Simmons called for a restructuring of America’s capitalist society, urging audience members to come to terms with the country’s historical exploitation and oppression of black and Native populations.

“Name what whiteness is and the centuries of harm it has done,” she said.

After Simmons’ speech, guest speaker Jackie Wang, a poet and Ph.D. candidate in the Department of African and African American Studies, took the stage. Wang began her presentation with a passage from the conclusion of her 2018 book “Carceral Capitalism,” blending prose and poetry in a discussion of prison abolition. She then shifted to a “meditation on images and what it means to look,” assessing the normalization of American public surveillance as a screen displayed an image of a confused Wang at a passport kiosk.

“What a person sees is shaped by the place from where they look,” Wang said.

Wang listed several “factors that shape perception”: wealth, power, and privilege. She then examined the media’s tendency to misgender transgender and non-binary prisoners, thereby depriving them of autonomy and “boxing them into normative framework.”

Soraya Shockley ’21, the afternoon’s first student presenter, said that taking a class with Simmons inspired her to “stretch PowerPoint to its limits” during her search for the ideal medium for her project. Her slideshow, “Somewhere Between Poplar and Cedar,” analyzed her own complicated relationship with slavery through the lens of her first trip to Lebanon at five years old, when she met her grandmother’s Filipina maid Leona. Shockley, who is of Palestinian-Lebanese descent, acknowledged the ongoing protests against the Lebanese government before explaining the country’s kafala system, a method of migration sponsorship for laborers which many have likened to slavery. As she narrated how Leona’s role under kafala taught her an early lesson about “work and coercion,” she noted that her family compensated Leona for her grueling labor.

“Our American money floated this kafala,” she said.

In a packet distributed to visitors at the entrance, Shockley explained the motive behind her work. “I felt there was no other option than to look inward, to scrutinize, and ask lots of questions out loud,” she said.

Next, Ayanna Aubourg and Mallory Hanora, representatives from an organization for incarcerated and formerly incarcerated women and girls, explained their goals to visitors. They defined terms central to their argument — white supremacy, criminalization, abolition — and asked the audience to brainstorm more sources of social and racial control. Hanora stated that the group’s mission is to “build compassion and solidarity.”

“Human conflict is real. What do we do when that happens?” she asked.

Hanora and Aubourg passed out flyers for local prison reform initiatives, including their group’s efforts to bail women out of Boston’s infamous South Bay prison.

Xochitl Morales ’22 and Carlos O. Agredano ’20 concluded the event with a performance commemorating the recent legalization of street vending in Los Angeles that ended a decades-long ban.

“[The installation] employs and manipulates traditional celebratory practices to illuminate how black and brown people are exploited by capitalistic structures,” the program notes read.

Dressed in blue aprons and caps, the pair danced around a replica food cart, handing audience members notes with calls for social justice. Morales described Los Angeles’ more than 50,000 street vendors’ defiance of the ban as a “bold display of civil disobedience.”

A reception following the program featured the music of Uri Schreter, a Ph.D. candidate in the Department of Music. As visitors discussed the afternoon’s takeaways, Schreter accompanied their conversation on a Kawai electric keyboard.